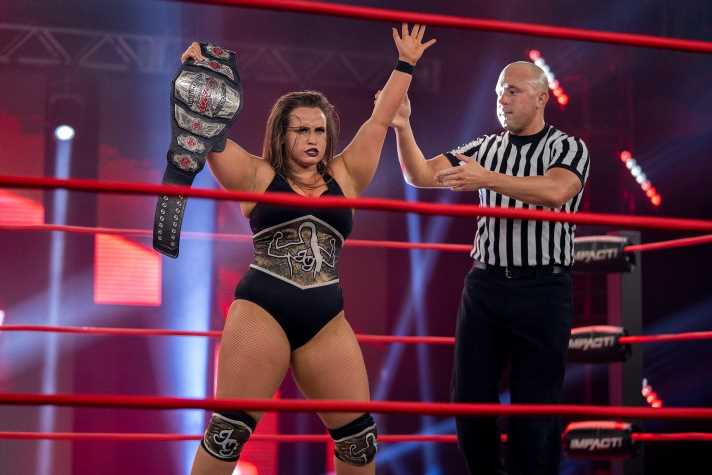 Impact Wrestling’s Knockouts division has broken down barriers over the years with wrestlers and matches that have wowed fans all over. Today, Impact is home to some of the top female wrestlers in the world. They will get a chance to prove that this Saturday, January 8 at Hard to Kill when they compete in the first-ever Knockouts Ultimate X match.

The Ultimate X match is known as the signature match of the X-Division. This year, however, the Knockouts are looking to change all of that. Jordynne Grace, Chelsea Green, Lady Frost, Alisha Edwards, Rosemary, and Tasha Steelz will be competing to determine the number one contender for the Impact Knockouts Championship.

Grace, a former Impact Knockouts Champion, Knockouts Tag Team Champion, and current Impact Digital Media Champion, has had an impressive career in just a short period. The 25-year-old is known to lay it all on the line. Her persistence, according to Executive Vice President of Impact Wrestling Scott D’Amore, helped lead the way for this match to happen.

Ahead of Hard to Kill, Grace spoke with Sporting News on her thoughts on the match and her goals for 2022.

Sporting News: Scott D’Amore stated you are persistent in and out of the ring. How much convincing did it take for this match to be put together?

Jordynne Grace: Me, Tasha Steelz, and Alisha Edwards, along with a few others, brought Scott out to the ring during Slammiversary. The Ultimate X platform was set up for when Josh Alexander was going to defend his title. I was kind of joking around at first, and I didn’t think he’d entertain it. I asked when the first Knockouts Ultimate X would be. He at first was laughing and said if you can climb up there then try it. We all did it, and that’s what kind of what got his gears spinning a bit.

SN: Why do you think the Knockouts could receive this opportunity now?

SN: What is something that concerns you regarding the Ultimate X match?

JG: The hardest thing about Ultimate X is if you are afraid of heights, like me, it is very scary. That is one of the biggest things I have to get over. To be fair, when I did climb when I was with Scott, it was just with wrestlers there. It will be a lot different when fans and my family will be there cheering. I feel like I won’t be afraid when the vibe is different.

SN: How are you feeling heading into the match and the fact it is happening?

JG: This match is really important. This is one of the only matches that hasn’t had a Knockouts version of it. It is important and a big piece of history to be a part of it. I’m honestly just super stoked that we can make this happen and that Scott agreed to it. I didn’t think it would happen this fast. It has maybe been six months since that conversation. I thought it would take more convincing than it did. I am happy that he is 100% behind it.

SN: Following this match, what are your other goals for 2022?

JG: I want to see any woman, or me, challenge and win the X-Division Championship and become Impact World Champion again.

January 7, 2022 WWE Comments Off on Jordynne Grace and the Impact Wrestling Knockouts Division are set to make history at Hard to Kill
NFL News