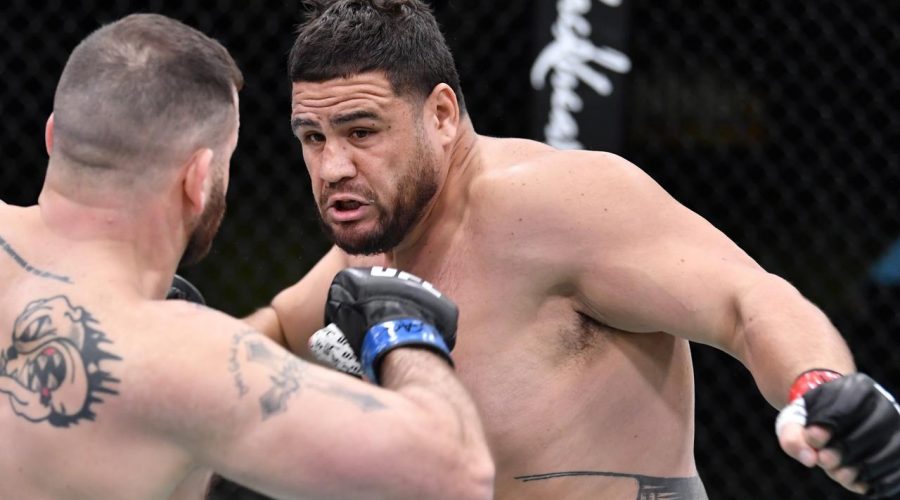 A year ago, Tai Tuivasa was offered the chance to train alongside UFC legend Daniel Cormier.

The Mt Druitt slugger had to accept a secret gym brawl.

But not with DC.

No, if Tuivasa wanted to be part of Cormier’s famed American Kickboxing Academy in California, he would have to fight a tattooed heavyweight most of you don’t even know.

Regardless, the Sydneysider’s reply was immediate: “Let’s f—— do it today”.

Which is why he is now here.

Not only fighting on this Sunday’s blockbuster UFC 264 card alongside Irish megastar Conor McGregor, but against Greg Hardy — that polarising heavyweight whose previous life included six seasons as an NFL defensive end with Carolina Panthers and Dallas Cowboys.

As far as eyeballs go, this will be the biggest fight of Tuivasa’s career.

But all because he agreed to a brawl nobody would see.

Understanding that after accepting said fight, Tuivasa began a series of training sessions with Cormier that now have him on a run of consecutive highlight reel KOs. 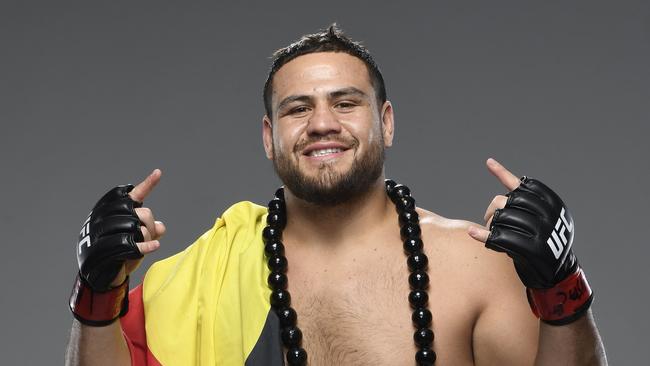 Better, and with the Covid situation Stateside rapidly improving, the fighter dubbed Bam Bam is now moving all future camps to AKA — with Cormier keen to play a key role in his development.

All of which was born out of his agreeing to that secret gym brawl with … wait for it … Justin Willis.

As UFC fans will need no reminding, Willis is the tattooed Californian who almost came to blows with Tuivasa way back at those 2018 weigh-ins before a UFC Adelaide card. Tuivasa says he will be sticking thick with the American Kickboxing Academy for future camps.Source:Getty Images

A beef Tuivasa was still holding 18 months later, when he reached out to Cormier about moving his fight camps to the same AKA gym where, ironically, Willis also trained.

“Daniel and I had been speaking a bit about me going there,” Tuivasa recalled this week from his Las Vegas hotel.

“At the time, I was going through a rough period — on a run of three losses — and so reached out to see if DC would have me there or not.

“DC knew about me and Willis and says, ‘how do we drop this problem?’.

“I said that only way to drop the problem was me getting my hands on him. I said if I saw Willis, I was hitting him.

“So DC offered to set up a fight in the gym. So as for what happened?

“Justin never showed,” Tuivasa laughs. “Actually, he not only never showed, but moved right out of California God Bless him.”

Undefeated in two fights since, and with Covid restrictions easing, Tuivasa says that after this weekend’s Hardy fight he will be moving all future camps to AKA — a gym whose other alumni include the likes of Khabib Nurmagomedov, Cain Velasquez, BJ Penn, Meisha Tate and Luke Rockhold.

“My camp for this fight, it’s my last in Australia,” Tuivasa confirmed. “From now on, I’ll be at AKA with DC.

“To get to where I belong, that’s where I need to be.

“Obviously Australia is home. My son is here, my family is here.

“And I realise how lucky I am to have somebody like DC supporting me. I realise this opportunity, it isn’t something that is offered up to everyone.”