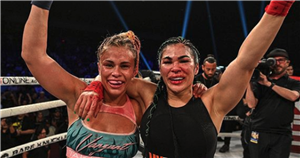 Former UFC Flyweight Paige VanZant has sent a defiant message to her doubters by flipping the bird on Instagram following her Bare Knuckle Fighting Championship defeat against Rachael Ostovich.

The 27-year-old, who joined the promotion on a four-fight contract back in August of 2020, won five of her UFC outings between 2014 and 2020, and had beaten Ostovich by submission in her penultimate bout.

Their BKFC meet didn't go the same way, with her 30-year-old foe winning by unanimous decision which led to VanZant storming out of the ring in disappointment.

She has since hit back with a proud message of her achievements, and shared multiple snaps of her middle finger in the air in a statement to those who doubt her.

That loss came after a defeat in her debut bout against Britain Hart back in February, and once again came with physical damage including badly swollen hands.

Ostovich said after her victory: "It's been a long time, two-and-a-half years since the last time we were in the cage.

"It was a new, completely different sport but I still fought Paige VanZant, give her a frickin' hand, show some respect!"

Will Paige VanZant ever return to UFC action? Give us your thoughts in the comments section

VanZant's upload was accompanied by a long statement, during which she promised to keep chasing her dreams despite criticism following the latest set-back.

"My story is full of setbacks, road blocks and detours. But, it is also filled with major comebacks, peace in my soul and a grace that saved my life.

"I promise you this, I would endure this pain everyday of my life over the pain of regret. I am going to keep chasing my dream one step at a time. 99.9% of the people on earth would not dare do what I do.

"This story will be even better then my first. And if you haven’t read my book before click the link in my bio. That is real pain. This is just a bad chapter.

"And to anyone out there struggling. Pain is only for a moment. The world may be dark and love to hate on you, but darkness does not drive out darkness only light can do that. So DO NOT STOP SHINING!!!!"

July 25, 2021 UFC Comments Off on Paige VanZant shows off swollen hands as she flips the bird after BKFC defeat
NFL News