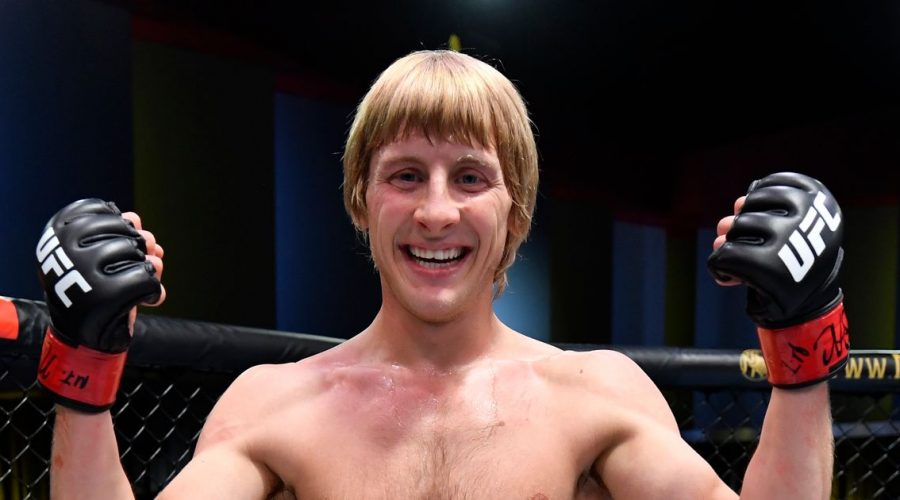 Paddy Pimblett is taking a deserved week off following his blockbuster UFC debut victory over Luigi Vendramini in Las Vegas last weekend – but his focus remains locked in on MMA greatness.

Taking some time out alongside his partner and their beloved pet dog, the Liverpudlian brawler is feeling justified in his decision to join the UFC after rejecting offers in both 2016 and 2018.

The 26-year-old has found his way to the biggest stage after both winning and losing the Cage Warriors Featherweight Championship before rebuilding and getting a third approach from UFC president Dana White.

One element of the fight game that no longer concerns The Baddy is confidence in his own ability – with eyes on a title shot down the line as well as becoming the face of MMA worldwide.

Speaking to the media inside his holiday home for the week, Paddy gave his thoughts on a wide range of characters in the fighting game, including White, Jake Paul and even Conor McGregor.

Paddy told Daily Star Sport when asked about the increased attention that has followed his stunning debut victory at the UFC Apex: "This is what I expected lad. I expected all of this.

"I knew what was coming. I knew after the show everyone would be talking about me.

"It's more for my family and my Mrs to get used to more than me. I knew this was coming."

Who should Paddy The Baddy fight next? Give us your thoughts in the comments section

Unlike almost every UFC fighter looking to boost their standing within the promotion, Paddy isn't keen to brandish names of potential opponents or call for anything near a title shot just yet.

One man who wasn't in attendance for his debut is UFC president White, but he did send a gift to the Liverpool local who now wants to see up a meeting with the boss.

He said: "I spoke to Sean Shelby (Senior Vice President of Talent Relations in the UFC) after it and he said congratulations. Dana wasn't there at the show though.

"He sent us a little present to the hotel after to me Jack (Shore) and Molly (McCann) and some T-shirts and said well done, but I haven't spoke to him personally yet. And I can't wait to speak to him personally."

Adding: "He said on his Insta an honourable mention for Paddy the Baddy and that it would be fun to get back to England with this kid, well let's do it. Let's go back. Let's have a full arena and he will see what the star power is."

Not one to shy away from giving his honest opinion, Paddy was asked about Jake Paul's professional boxing career a matter of minutes after his UFC debut, in testament to his already sizeable fanbase.

He said when asked about the former Disney star: "I think he's a tool, he's a bad sausage.

"I got asked about him and I just told the truth about him. He's a bad mushroom, if he ever wants to fight a real fighter then I am here. I'll punch his head in. I'm not calling him out, I won't stoop that low."

While Paddy isn't necessarily keen on being compared with one of the all-time greats in Conor McGregor, he admits that their paths might end up crossing down the line.

He adds: "Obviously nice to be compared to the biggest names the sport has ever seen. I understand why people are doing it because of our personalities and we are very polarising in that you either like us or you hate us.

"But me and Connor are two different entities altogether. Completely different."

Adding: "I think in a few years of paths might cross but for now there's not really much point in even mentioning us in the same sentence."

The dream? For Paddy to have his hands on UFC gold before his career comes to an end, with Michael Bisping remaining the only British fighter to have won a title within the promotion.

Paddy concluded: "If you don't want to become a world champion then you are in the wrong sport. I don't think anyone will could beat me lad. I'm not delusional, I know they are not going to give me a top 10 or a top 15 now.

"But it doesn't matter who they put in front of me I'll always believe that I'm going to win."

Catch the full replay of Paddy’s bout at UFC FIGHT NIGHT®: BRUNSON vs. TILL on Fight Pass, the home of UFC.