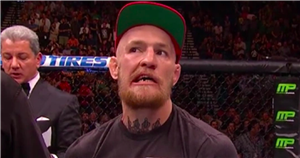 Conor McGregor has showed off his shiny new teeth – after his mouth was smashed to pieces by Dustin Poirier.

The American was a huge underdog going into the clash, having lost to Mcgregor before back in 2014.

But Poirier exacted his revenge and in style after pulverising Notorious with a series of brutal punches.

A series of hard-hitting kicks to McGregor's calf weakened the Irishman and allowed his opponent to punch his way to victory in the second round.

Poirier upped the tempo and it left him crumpled in a heap on the floor before referee Herb Kean jumped in to call an end to the contest.

And in this contest, it was a mangled leg but in the first fight between the two, McGregor stood victorious but also toothless.

In his latest Instagram post, the former two-weight world champion flashed a smile showing off his pearly whites.

Captioned, it read: "Hey guys, I decided to match my smile to my bank account. See yous in July.”

McGregor and Poirier will complete their trilogy of fights this summer when the two meet again on July 10, in Las Vegas at UFC 264.

And the 32-year-old has insisted he will not be taking any rest days as he looks to claim revenge of his own while also looking to bounce back in UFC, which has seen him win just once since 2016.

When reflecting on his 10-year career in the sport, McGregor said: “I didn’t take rest days unless I absolutely had to.

"Not one. Not even a Sunday. I will take this approach again for my comeback fight.

"I didn’t become UFC champ champ with this method but I did become UFC 145 champion.

April 8, 2021 UFC Comments Off on McGregor shows off new perfect teeth after getting mouth smashed by Poirier
NFL News