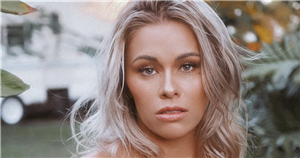 Paige VanZant was initially against creating her raunchy fan site PaigeFanZant.com but was convinced by her boyfriend and coach Austin Vanderford, who told the former UFC strawweight to “go for it, go have fun.”

VanZant parted ways with the UFC in 2020 after being defeated by Brazil’s Amanda Ribas at UFC 251.

After the bout, UFC president Dana White mocked the former Dancing with the Stars contestant for losing.

“When you talk all that stuff, 'I'm not being paid enough,' and fighting inconsistently, one time in the last year, injuries, and then get smoked in the first round of the fight. She should definitely test free agency.”

Since, VanZant has gone on to make more money than she ever did while competing in the UFC. Alongside her burgeoning career as a bare-knuckle boxer, 12 Gauge Paige has also set up an exclusive content website called PaigeFanZant.com.

In a recent interview with MMAFighting.com, VanZant claimed that while she was initially apprehensive about creating the website, it is now one of the best decisions she’s ever made.

“There was always this back and forth,” VanZant began.

“There’s two sides of it. I didn’t want to put myself in a position where I would lose business opportunities based on having an exclusive content site, but I feel like I’m already seen as a sex symbol in the sports world. I might as well have the monetization behind it.

Do you think Paige VanZant will win her upcoming bare-knuckle boxing match? Let us know in the comments section below.

“I wanted to do it on my own terms. So, I actually joined Fan Time, it’s a separate company. I’m not with OnlyFans.

“It’s PaigeFanZant.com and it’s my own website and I have a lot of control over what goes on there. It’s basically me doing exclusive things. I’m proud to say I’m part of it.”

It costs $9.99 a month to access the former UFC star’s website, which provides fans with exclusive content as well as a chance to message and interact with VanZant.

“I work hard for my body,” she continued.

“I work hard for who I am, and there’s a side of me that’s extremely girly and feminine, and I get to share that on my fan site.

“I was kind of the one against it and [Austin Vanderford, VanZant’s boyfriend] pushed me like, ‘screw it go for it, go have fun.”

VanZant is set to return to action at BKFC 19, a bare-knuckle boxing event currently scheduled to take place on July 23.

The event will be headlined by a clash between VanZant and Rachael Ostovich, who will be making her debut in the bare-knuckle boxing ring.