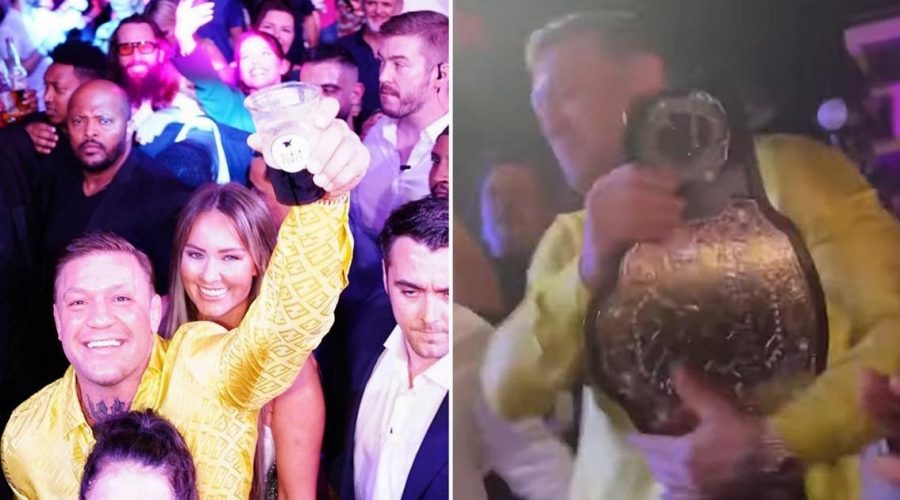 Conor McGregor has been enjoying his downtime in Dubai as he partied with his old championship belt. The Irishman is one of the greatest UFC stars to set foot in the octagon and made history by becoming the first man to hold two of the promotion’s titles at the same time.

The 34-year-old took a trip down memory lane as he let his hair down with one of the titles he’d previously won draped over his shoulder. Wearing a lime green top, ‘The Notorious One’ interacted with the crowd and even got behind the bar and had a drink.

McGregor posted a series of snaps from the night out with his fiancée Dee Devlin hosted by The Black Forge Inn pub. He wrote alongside the snaps: “Another incredible night at @theblackforgeinn Abu Dhabi, with the Irish out in force!! The @forgedirishstout and @properwhiskey flowing, it’s like a festival!”

After knocking out Jose Aldo in just 13 seconds in December 2015 to win the featherweight belt, McGregor snatched the lightweight strap from Eddie Alvarez less than a year later to become a double champion.

McGregor, who last fought in July 2021 when he broke his leg while fighting Dustin Poirier, now looks fit and is eager to return to the octagon next year.

Hehas bulked upsince the horrific injury which coach John Kavanagh puts down to intense weight training which replaced his usualMMAdrills. McGregor has hinted he could make hisUFCreturn at 170lbs after undergoing a huge weight transformation and is likely to compete in the welterweight category.

He said on Instagram Live: "I'm going to be back soon, hopefully. Early 2023 I'm aiming for. Sometime in that first quarter." He added: “"I’m feeling crazy confident. Calm. Disattached from emotion. Aware of what I must do and making it happen. Visualizing. I see it all. Clear.”

However, McGregor hasn't been enrolled with the United States Anti-Doping Agency (USADA), a mandatory requirement for UFC competitors.

That means his next fight won't be until April 2023 at the earliest, with six months of testing required. Fighters who have left the pool due to retirement or other reasons are required to be in it for a minimum of six months before competing again.

USADA and the UFC, however, do have the power to waive the six-month testing pool requirement in "exceptional circumstances or where the strict application of that rule would be manifestly unfair to the athlete."

November 21, 2022 UFC Comments Off on Conor McGregor parties in Dubai with old UFC belt ahead of 2023 return
NFL News