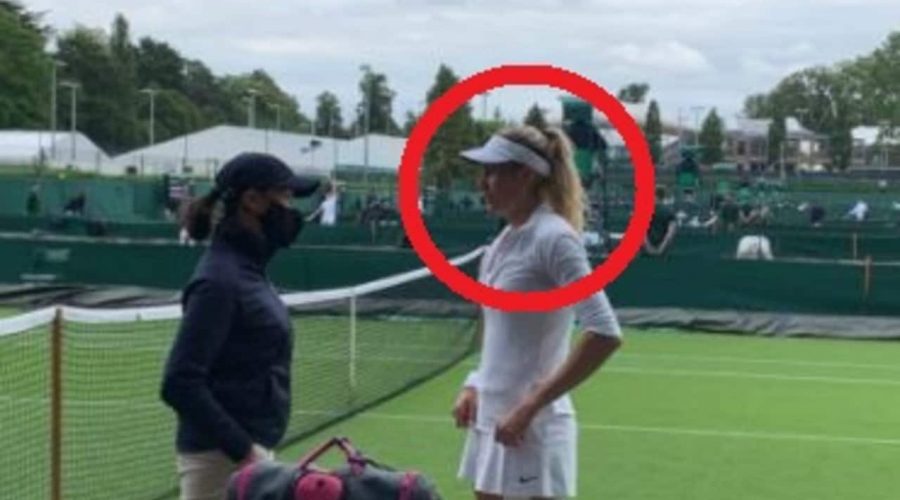 The tournament proper hasn’t even started yet but Wimbledon has already delivered its first controversy of 2021.

Eager to get going after cancelling the tournament for the first time since World War II and the first time in the Open Era, the Wilmbledon fashion police were out already in the qualifiers.

25-year-old Dutch World No. 206 Indy de Vroome was at the centre of the furore, having won her first round match 6-2 6-2 against Slovak Viktoria Kuzmova.

De Vroome won’t be in the main Wimbledon draw though as she bowed out against number four seed Russian Anna Kalinskaya 6-3 6-2 earlier today.

But it was a moment from her first round match that had tongues wagging.

After her match with Kuzmova, de Vroome shared an image from the match where she was being spoken to by the referee.

“The ref telling me that the inside of my cap isn’t white enough,” De Vroome wrote in her Instagram story.

Wimbledon is generally seen as the most traditional of the grand slams with the tournament officials cracking down on colour with the players required to wear white.

Rule No. 7 of Wimbledon’s official dress code reads: “Caps (including the underbill), headbands, bandannas, wristbands and socks must be completely white except for a single trim of colour no wider than one centimetre.”

Social media was quick to react to the image shared by a Twitter user with one arguing: “The bottom of the brim is supposed to be dark – it’s more effective in keeping the sun out. That’s pretty basic knowledge that the ref should know.”

Another pointed out that the Wimbledon caps for officials are purple, while there were other reactions along the line of “pathetic”, “hilarious” and saying “Wimbledon rules are a joke”.

“I was once DQ’d from a tournament as a kid because ‘the lacoste symbol on my polo and nike swish on my shoe combined to make a distracting ensemble not in the spirit of the club or the tournament.’ lmao.”

De Vroome in 2011 at Wimbledon as part of the girls tournament — this was fine.Source:Getty Images

But it’s not the craziest ruling Wimbledon has with underpants also in the spotlight.

Aussie John Millman fell foul of the Wimbledon fashion police in 2018 when officials informed him shortly before his match against Milos Raonic his undies were a bit too loud for the famous venue.

Millman sent his dad on a shopping trip to a nearby apparel store to find a more suitable undergarment and he was allowed to play on, but eventually lost to the big-serving Canadian in three sets.

In 2017 Venus Williams courted controversy by sporting a pink bra, changing midway through her match against Elise Mertens in a situation she described as “awkward”. In 2015, Eugenie Bouchard was almost issued with a code violation for wearing a black sports bra, even though it was almost completely hidden.

In 2013, Wimbledon king Roger Federer was told not to wear orange soled shoes.

These are just a few of the stars who were cracked down on so at least de Vroome finds herself in good company.