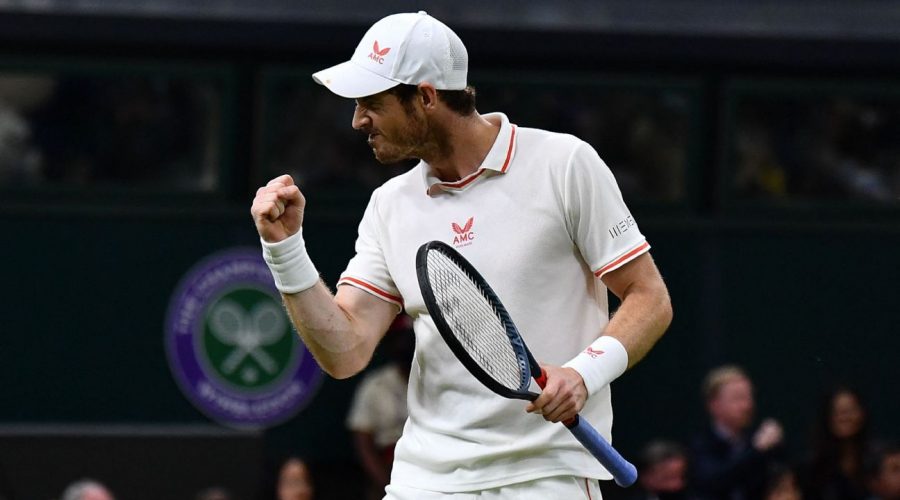 LONDON — Trailing two sets to one against a German qualifier ranked No. 151 at Wimbledon on Wednesday evening, Andy Murray turned to the crowd and yelled one word: “Fight.”

It’s a word that epitomizes Murray’s storied career, the kind of never-say-die attitude that brought him three Grand Slam titles, two Olympic gold medals and the No. 1 ranking.

With a metal hip, inserted in early 2019, it seemed like nights like this were a thing of the past, but over the course of almost four glorious hours on Wimbledon’s Centre Court, he thrilled everyone once again.

For anyone who has followed Murray throughout his career, from his early days to his two Wimbledon triumphs and other big successes, this kind of attitude is nothing special.

At 34, with a metal right hip, a lack of match practice and in the singles draw at Wimbledon since 2017, Murray raised himself to a new level yet again, finding the belief to cut loose when he needed to, lifted by a crowd who yelled loud and long into the night.

But even by Murray’s standards, this one was extra special. The atmosphere on Centre Court, which was half full because of COVID-19 restrictions, was as good as anything he has experienced in his 16 years at Wimbledon.

“That’s one of the reasons why I’m still playing is because of moments like that,” he said.

“Like, why would you want to give that up? You know, the atmosphere, it was good the whole match, but especially the last sort of hour and a half was brilliant. I still enjoy that.”

Having led the 27-year-old Otte by a set and 3-1, the match probably should have been over within a couple of hours.

But doing things simply has rarely been Murray’s way.

The man loves a fight, and from the moment the two players returned to court at 2-2 in the fourth after the roof was closed because of bad light, he was a changed man.

“I needed to do something different,” Murray said. “I started going for my shots more, started dictating more of the points.

“I was being a little bit negative. Because of the lack of matches, in the important moments I didn’t make the right decisions a lot of the time, but I think I played the right way the last couple of sets.

“The first set and a half was really good, there’s just bits in the middle I’d like to change.”

Toward the end, as he dug deep once more, poor Otte looked like a beaten man, but it still took some vintage Murray shots to get the job done.

One flashing forehand pass crosscourt, on the run, was out of the top drawer while the two topspin lobs in the last game, one at 15-15 and the other on match point itself, were as good as any he has hit.

The fans he had been locking eyes with during the last hour of the match were rewarded as Murray handed one of them his shirt. The Scot said they had helped give him the energy to get the job done.

“One guy was just standing up all the time and getting pumped and he just caught my eye,” Murray said. “Each time I won a point, and even when I lost points, I was just looking at him. The crowd feel[s] that I guess and feel[s] like you’re feeding off them and stuff. It was nice.

“I mean, it helps. It’s something I have done a number of times over the years in certain matches. I hope the fans like it and don’t think that it’s a bit weird that I’m sort of staring at them and screaming at them for like an hour, but they seem to enjoy it, as well.”

In 2019, when Murray announced he was going to try to return to the Tour with his metal hip, few thought he could actually do it. After all, it had never been done in singles before.

Even if the fans weren’t necessarily on his side, Otte more than played his part, and the German described the experience as “just unreal.”

“I enjoyed it, although they were all cheering for Andy,” he said. “It was unreal to play on Centre Court.”

Murray told Otte if he keeps playing at that level, the results will come.

The path back to Wimbledon has been a long and arduous one for Murray, with numerous setbacks causing him to abandon plans to play in various events along the way.

But he never gave up — he never does. And nights like the one he enjoyed against Otte at Wimbledon on Wednesday will surely make all the hardship feel worth it.