Elated Serbian fans outside the Federal Circuit Court in Melbourne have erupted in cheers following news that Novak Djokovic’s visa cancellation has been quashed.

As word of the verdict spread just after 5pm, around 100 people danced, drummed and chanted “Nole, Nole, Nole” for their champion. Some fans driving past the celebrations joined a chorus of car-horn honks, with Serbian flags flapping out their car windows. 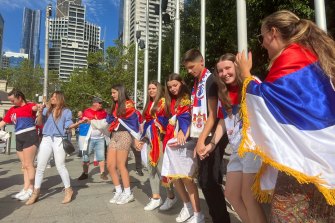 The ruling came after a long day in the sun for many of the assembled, having set up on pavement early on Monday to sing traditional Serbian songs and listen to the live-streamed hearing via a megaphone.

Slobodan Bendjo, who works in Collins Street, said the decision had reinforced his trust in Australia’s courts.

“I feel great because I just realised that the Australian legal system is working,” Mr Bendjo said. “It’s evidence-based, it’s about justice and it’s not influenced by any politicians. 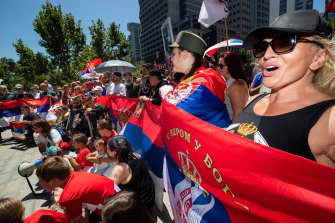 Protesters outside the Federal Court.Credit:Jason South

“People here, they’re all happy and you feel safe and secure in this country once you realise that the legal system is functional.”

The supporters moved from the court to Federation Square around 6pm, marching to the beat of one supporter’s drum.

Keen tennis fan Mladen Miljanovic spent a nervous wait on Monday toting a racquet and tennis ball, hoping for the chance to see his country’s tennis hero triumph again at the Australian Open.

“From the beginning, we knew Djokovic didn’t do anything,” he said.

“No one is going to come 20,000 kilometres without a visa and everything approved. Especially not someone like Djokovic, who is a smart person.

“The federal government, the Victorian government and Tennis Australia have just been trying to blame each other.”

Vesna Miljkovic had waited outside the court from 10am to follow the hearing, and proudly branded herself a “crazy Serb” who would celebrate late into the night.

She said the ordeal had initially left Melbourne’s Serbian community “broken”, as Djokovic’s time in immigration detention meant he couldn’t celebrate Orthodox Christmas in Brunswick as usual ahead of the Australian Open.

“He is our heart, he is our soul, everything,” Ms Miljkovic said from Federation Square on Monday night.

“We are so connected with him here and back in Serbia as well. He is spreading peace and love to the whole world, and that’s what we need in this situation we live in right now.

“COVID has been hard for everyone … right now we just want to enjoy his tennis and for him to play.”

Djokovic’s faithful Serbian fans spent the day outside Melbourne’s Federal Court, waiting keenly to find out if the men’s tennis world No.1 would be released from detention ahead of the Australian Open.

The atmosphere was jovial but slightly weary from the heat. While the hundred-strong crowd was dancing and united in song outside the court’s entry earlier in the day, by 3pm many had retreated under nearby trees, with the temperature in Melbourne’s CBD sitting at a humid 28 degrees.

During the day fans were kept updated via a live stream of the hearing, which was being fed through a megaphone.

Djokovic fan Suzanna, who declined to give her full name, said she’d “never been more disgusted” in the Australian government and she believed the case was actually about persecuting someone who was not vaccinated against COVID-19.

“They want to make an example of him. It’s disgusting that you’d treat a champion who’s won this event nine times like this…” she said. “This isn’t just about tennis and Djokovic, it’s about everyone. We’ve all been in prison.”

Some outside the Federal Court who showed up in Serbian traditional dress were carrying umbrellas scrawled with slogans against vaccine mandates.

January 10, 2022 Tennis Comments Off on ‘We want to see you win’: Elated fans back Djokovic
NFL News