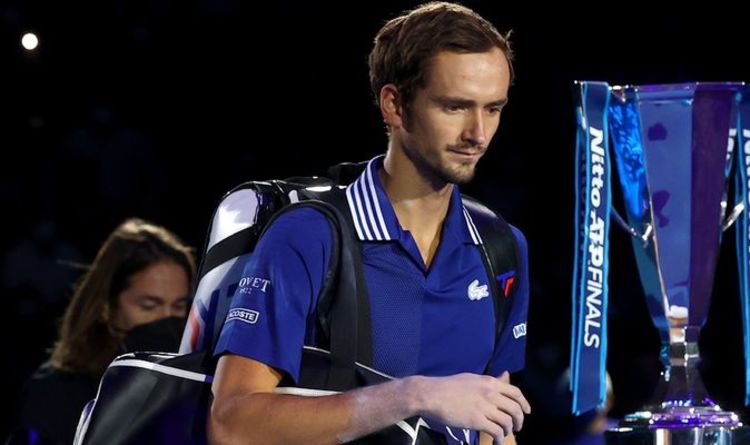 Daniil Medvedev reacts to US Open win over Novak Djokovic

US Open champion Daniil Medvedev had his £168,000 watch stolen whilst competing at the ATP Finals in Italy last week.

Medvedev saw off Norwegian star Casper Ruud in the semi-finals of the season finale in Turin, before missing out on back-to-back titles after losing in straight sets to German Alexander Zverev.

However it seems that the Russian was dealt a double blow on finals day, after he returned to the dressing room following defeat to find that his £168,000 Bovet watch had been ‘stolen’.

According to Italian news outlet La Stampa, the world No 2 realised his luxury watch had gone missing from his changing area, before then filing a complaint to the police.

Once the authorities were informed the Bovet accessory was recovered, however no information was revealed with the investigation into the disappearance still said to be ongoing.

In spite of his final defeat, the 2021 campaign was yet another successful one for Medvedev, with the highlight of course being his first ever Grand Slam victory at September’s US Open.

His victory in New York helped him on his way to securing an eye-watering £5.6 million in career earnings this calendar year, making him the second highest on-court earner in the sport in 2021 behind world No 1 Novak Djokovic.

The Russian has announced himself as one of tennis’ major stars in recent years, cementing himself as the world No 2 this campaign only behind the great Djokovic.

And with the likes of his final opponent Zverev, as well as Stefanos Tsitsipas and Andrey Rublev all making their mark, Medvedev believes it won’t be too long before the sport’s new breed takes over the renowned ‘big three’ of Djokovic, Rafael Nadal and Roger Federer.

Speaking about the sport’s ever-changing greats he said: “When there was [Bjorn] Borg and [John] McEnroe, when they were close, finished their careers, everybody was like, ‘tennis is over, we won’t ever have any great players, it’s finished’.

“We did have some. [Pete] Sampras, [Andre] Agassi, they were at the top. [When] Sampras retired, [it was like again people were thinking] ‘Okay, tennis is over.’

“Then we had Novak, Roger and Rafa. If you asked just before they came, everybody would say, ‘Well, tennis will not be interesting anymore.’”

He continued: “It’s the same here. Tennis is a great sport, so I don’t see why our generation would miss on something.

“Of course, maybe we don’t [win] 20 Grand Slams [each], yet nobody did before Roger, Rafa and Novak, so they were [all in a way] also worse than them… It’s definitely not going to be shameful [if we win less].”