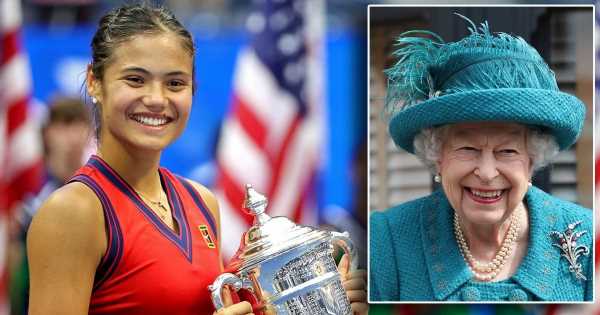 British tennis superstar Emma Raducanu will be framing her letter from the Queen after saying she was "extremely honoured" that Her Majesty took notice of her US Open victory.

Speaking outside the Arthur Ashe Stadium, the 18-year-old said: 'It meant everything to get a message from Her Majesty. She's such a great inspiration and role model for the whole country so to have a note from her… I was extremely honoured and very very grateful that she took notice of my tennis. I can't believe it. I'm maybe going to frame that letter or something."

A prompt message was sent to Raducanu on Saturday night after she'd beaten fellow teenager Fernandez, and read: "I send my congratulations to you on your success in winning the United States Open Tennis Championships. It is a remarkable achievement at such a young age, and is testament to your hard work and dedication.

"I have no doubt your outstanding performance, and that of your opponent, Leylah Fernandez, will inspire the next generation of tennis players. I send my warmest good wishes to you and your many supporters."

The Queen wasn't the only member of the royal family to be impressed, however.

The Duke and Duchess of Cambridge took to their joint Twitter account to praise Raducanu's "stunning" displays, while also congratulating Fernandez, 19.

"Huge congratulations Emma Raducanu on your stunning performances and historic Grand Slam victory! Incredible – we are all so proud of you," they said.

"Leylah Fernandez well done on your amazing achievements at this year’s US Open, it’s been a pleasure to watch."

The Prince of Wales and Duchess of Cornwall echoed similar sentiments.

"Congratulations to Emma Raducanu on your US Open win – what a fantastic achievement. We are all so proud.

"Well done to Leylah Fernandez today too. An outstanding match between two inspiring young women – we can’t wait to see where you go next."

Leave your message for Emma Raducanu in the comments section!

"What a sensational match! Huge congratulations to Emma Raducanu," he tweeted. "You showed extraordinary skill, poise, and guts and we are all hugely proud of you."

September 12, 2021 Tennis Comments Off on US Open champion Emma Raducanu reacts to receiving letter from the Queen
NFL News