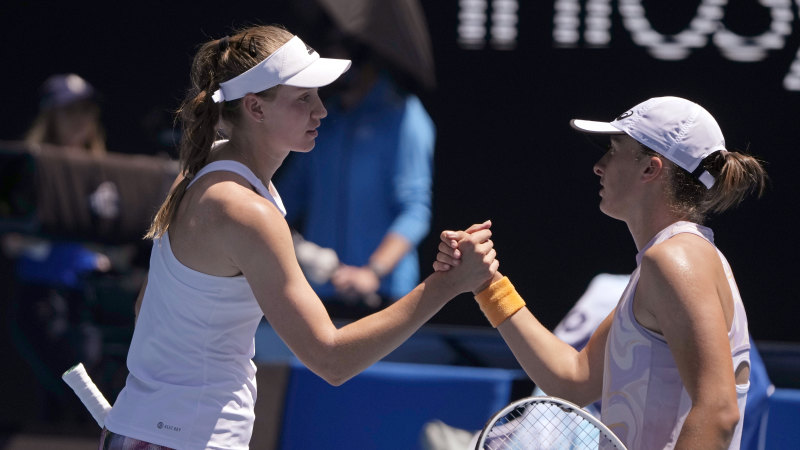 The Australian Open will start finals week without the top seeds on both the men’s and women’s sides after reigning Wimbledon champion Elena Rybakina knocked out world No.1 Iga Swiatek in straight sets on Sunday.

And Jelena Ostapenko upset American Coco Gauff 7-5, 6-3 to dramatically alter the top half of the women’s draw. 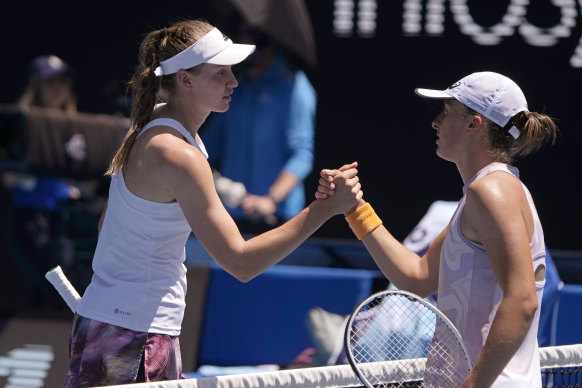 Elena Rybakina, left, of Kazakhstan, left, is congratulated by Iga Swiatek of Poland after their fourth round clash.Credit:AP

The Kazakhstani Rybakina, who last year became the first player from her country to win a major, took it up to the Polish star from the start with an aggression that helped her land 24 winners to Swiatek’s 15, including four off the return serve.

That came with a higher unforced error count, but Rybakina struck when it mattered, including a return winner to nab a break at 3-3 in the opener, which would see her go on to take the first 6-3.

Swiatek, who holds the current French and US Open titles, looked like making a comeback early in the second set after taking a 3-0 lead, but the 23-year-old Rybakina held her own to level it, before pouncing at 4-4 with another run of pacey returns and a deadly accurate forehand winner.

“In the important moments I played really well, so it made a difference,” she said after the 90-minute match.

After winning Wimbledon last year but receiving none of the usual ranking points to go with it, Rybakina was always going to be a bigger contender at this tournament than her 22nd seeding might have suggested.

She had to make do with playing her first round out on court 13, but was then upgraded to arenas, including centre court for Sunday’s dispatching of the world No.1.

Rybakina will play 17th seed Ostapenko in the quarter-finals. Second seed Ons Jabeur – whom Rybakina beat in the Wimbledon final – was knocked out in the second round, but Jessica Pegula, Caroline Garcia and Aryna Sabalenka remain in the field.