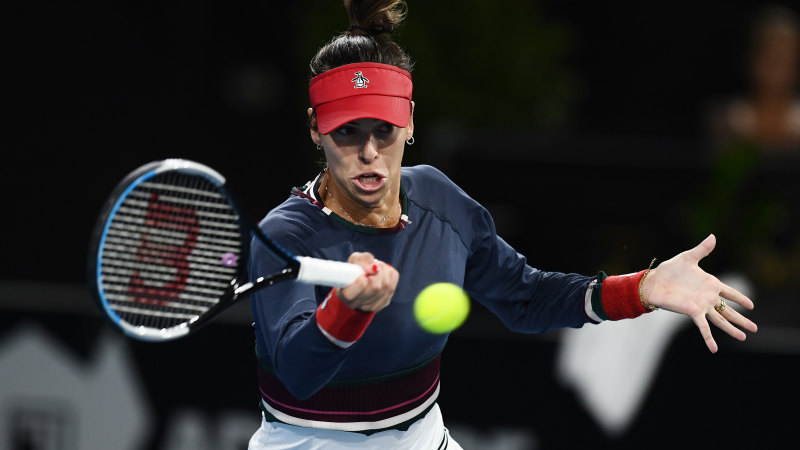 Ajla Tomljanovic soared as Alexei Popyrin stumbled in Sydney on Tuesday on a day of diminishing returns for the Australians ahead of next week’s Open in Melbourne.

Tomljanovic, the world No. 45, was out of the blocks quickly against Slovakian qualifier Anna Karolina Schmiedlova and recovered from a second set stumble to breeze through the opening round 6-2, 6-3 in an hour and 20 minutes.

It looked like a regulation day at the office for the 28-year-old before she was broken twice early in the second set and had to regain her composure to finish with a wet sail and set up a clash with fifth seed Paula Badosa in the next round.

Tomljanovic had some heavy strapping on her thighs but dismissed any doubts about her condition ahead of the Australian Open, with the 28-year-old saying it was precautionary given some historic issues with her hips and adductor muscles.

“I just have a tough time sometimes with my adductors and hips and just trusting it is not coming easy to me, so I just felt like tape was the right way to go,” she said after the match.

“It was so humid out there, so I spoke to the physios before the match that, you know, if I could get a re-tape without getting the medical, which we did, and it was a little bit too tight in the second. But the tape does get a little bit loose. 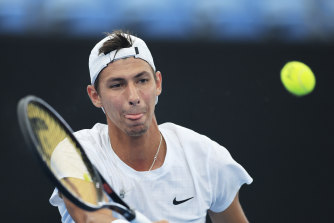 “Once I finished, I just really wanted to get it off just, yeah, to let my legs breathe a little bit.”

Tomljanovic is Australia’s second highest-ranked female player behind world No.1 Ash Barty but has never made it past the second round of the Australian Open, something that looks entirely plausible this year if she continues to strike the ball as well as she did on Monday.

Beyond that, a maiden WTA title and a move into the top 30 would represent a good return as she heads into another year on the tour.

“Being better than my career high isn’t really going to make me, like, ‘Oh, my gosh, yes’. It’s not going to feel like that, because, in a way, I felt like I deserved it with the year I had last year,” she said.

“But probably getting into that top 30 would be something is where I’d be, okay, this is what makes the difference for me.”

Popyrin was the next local on Ken Rosewall Arena but the big-hitting world 59 wasn’t able to find a way to through the all-court game of Pedro Martinez, with the 61st-ranked Spaniard winning 6-4, 6-4.

He was broken in the opening game and just didn’t have the consistency to go point-for-point with Martinez, who played some wonderful defensive tennis to frustrate the 22-year-old and Australian and help nullify his thunderous forehand.

It adds to a tricky lead-in for Popyrin, who was eliminated in the second round of Melbourne’s Summer Set last week by Dutchman Tallon Griekspoor and missed some regulation shots on Tuesday that could have helped sway the momentum in his favour.

January 11, 2022 Tennis Comments Off on Tomljanovic the standout on difficult day for locals ahead of Open
NFL News