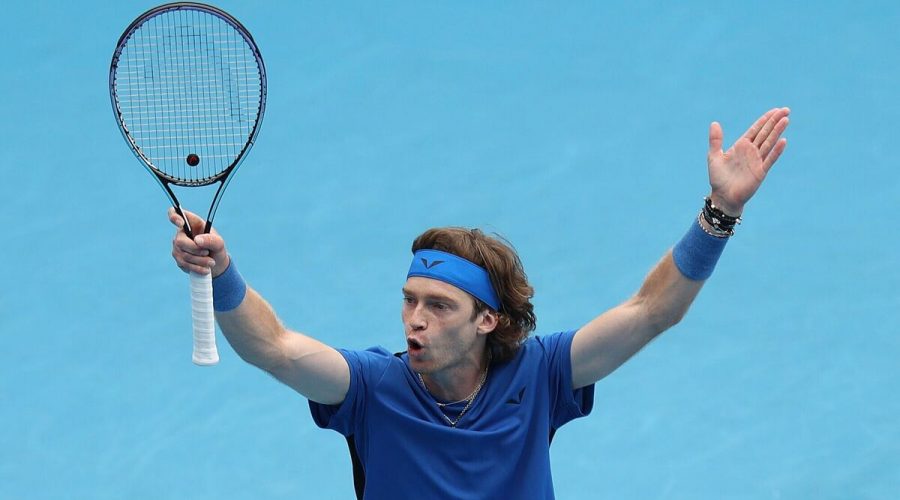 Tennis star Andrey Rublev lambasted the chair umpire at the Australian Open after he was accused of swearing. The tournament’s fifth seed defeated Finland’s Emil Ruusuvuori in four sets to reach the third round.

But during the third set, the 25-year-old was handed an audible obscenity penalty after the official believed he swore at him in his native Russian language.

“Are you from Russia? Do you speak Russian?” Rublev asked, saying he had not sworn. “You have to take this back. There are so many similar words.”

The umpire stood his ground and claimed he understood it was a swear word. “So now you are telling me this, I’m understanding f*** you. It’s exactly the same,” Rublev responded.

“So why you don’t give me warning now when I say f**k you? That’s what I hear.” Some Australian commentators were left stunned by Rublev’s outburst and blasted him for showing a lack of maturity.

“Self-imposed loss in the end. For a player of this calibre to let himself down like that he put himself into a shocking state of mind at a crucial stage,” one said. “Like a volcano bubbling at the surface. It’s an emotional sport, you’re out there on your own.

“But he’s experienced and if he’s going to get further than quarter-finals he’s got to be better than that. In the end it affected him in a way he shouldn’t have allowed.” After losing the set in which tempers flared, Rublev powered through the finish line in a 6-2, 6-4, 6-7(2), 6-3 win, hitting an astounding 50 winners and 16 aces.

“First round was super hot, now it’s super windy,” he said in an on-court interview. “It’s tough in these conditions against players like Emil who hit the ball really hard, flat… I’m happy that I was able to show a great level, no matter the conditions.”

“I started really well. I was dominating, I was hitting the ball really well,” he assessed. “That allowed me to win two sets straightaway. And then I lost focus a bit and Emil, opposite, he started to play a bit better, more consistent, harder. In the fourth set I was able to play good tennis again and I was able to win.”

He will face Britain’s Dan Evans in round three who beat French veteran Jeremy Chardy 6-4, 6-4, 6-1 in round two. “I’ve never played him in a Grand Slam, so it’s slightly different,” he said. “I look forward to it. [These are] the matches I want to play in.

“I came here wanting to get into the third round, where my seeding should get me. Then, it’s a match I can win, but it’s also a very tough match… It’s going to be good fun. Obviously my plan will be to frustrate him with my game, and I have done that pretty well the last few times. We’ll see how he responds. I’m sure he’ll have a different plan.”

January 19, 2023 Tennis Comments Off on Rublev rages at umpire after being accused of swearing in Russian
NFL News