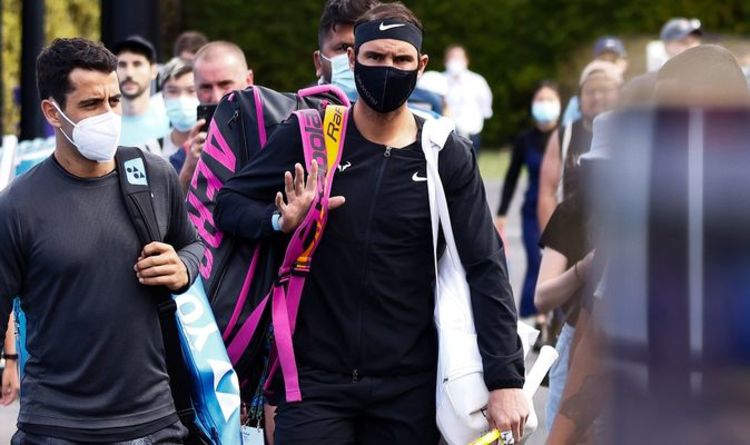 Rafael Nadal surprised his fans by arriving in Melbourne for the upcoming Australian Open last week in his comeback from a foot injury. The world No 6 ended his 2021 season early and returned at the Mubadala World Tennis Championship exhibition last month. A video of Nadal apologising to Australian fans for being unable to sign autographs has now emerged following his arrival at the tournament.

Nadal is set to play his first professional match since August on Thursday.

The 20-time Grand Slam champion ended his season following the ATP 500 in Washington, and before that had not played since a shock semi-final loss at the French Open in June.

He returned at the Mubadala World Tennis Championship exhibition in Abu Dhabi last month, losing his first match to Andy Murray before being defeated by Denis Shapovalov in the third-place play-off the following day.

Despite returning to the court for an exhibition, Nadal then admitted at the time that he wasn’t 100% on whether he would compete in the season-opening Grand Slam, and needed to discuss with his team.

He then announced that he had tested positive for Covid upon returning to Spain following the Abu Dhabi exhibition.

It was the first in a series of announcements from players that had competed in the Mubadala event, with the likes of Andrey Rublev, Denis Shapovalov, Ons Jabeur and Belinda Bencic also testing positive after competing, and Emma Raducanu withdrawing ahead of the event following a positive Covid test.

Nadal’s positive Covid test left his Australian Open participation up in the air as he completed his isolation during the period when charter flights for Australia began taking off.

But on New Year’s Eve, 11 days after announcing he had tested positive in his PCR on return to Spain, the 35-year-old surprised fans with a social media post showing himself on court in Melbourne, confirming he had flown in for the ATP 250 event and Australian Open.

He will now face Lithuanian qualifier Ricardas Berankis in his first professional match since August on Thursday.

Nadal has already taken to the court at the Melbourne Summer Set, teaming up with young compatriot Jaume Munar in the doubles, winning their first-round on Tuesday in a match tiebreak.

During his time in Melbourne, the Spaniard has been seen apologising to fans in a new video, as he is unable to sign autographs.

The video, from Wednesday, shows Nadal waving to a crowd of fans as he leaves the practice court.

The world No 6 can be heard apologising for being unable to sign autographs, part of a Covid safety measure in the grounds.

“I’m so sorry but I cannot sign,” Nadal says, putting his hands together to apologise to the crowd.

He is then heard repeating himself when asked again by a fan wearing a hat, as security members confirm there is “no signing” while escorting the 2009 Aussie Open champion away.

January 5, 2022 Tennis Comments Off on Rafael Nadal video emerges as he apologises to fans at Australian Open
NFL News