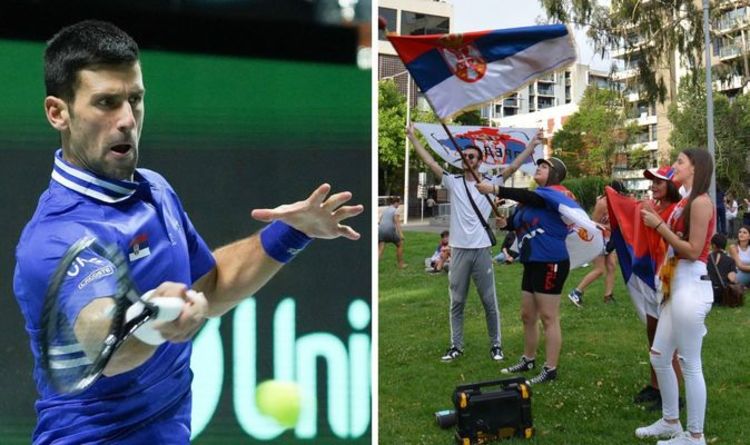 The Professional Tennis Players Association has spoken out amid Novak Djokovic’s medical exemption saga. The world No 1 co-founded the association with Canadian tennis player Vasek Pospisil in 2020. Djokovic flew to Melbourne to compete in the Australian Open after receiving a medical exemption but had his visa cancelled upon arrival, and now awaits the result of an appeal hearing on Monday.

Djokovic had been in doubt for the Australian Open after tournament organisers confirmed all players needed to be fully vaccinated to compete but following months of speculation, announced his participation on Tuesday.

Alongside a photo of himself at the airport, the nine-time Aussie Open champion took to Instagram to announce he was flying to Melbourne after receiving “an exemption permission”, later confirmed by Tennis Australia who said he “applied for a medical exemption which was granted following a rigorous review process involving two separate independent panels of medical experts.”

While the world No 1 was mid-air on his way Down Under, Australian border officials found an “issue” with his visa, as it was reported a member of Djokovic’s team had applied for the “wrong type” which did not cover medical exemptions.

It meant that Djokovic was taken to an airport room by Border Force when landing in Melbourne late on Wednesday, questioned overnight.

JUST IN: Djokovic ‘not the same as Roger Federer and Rafael Nadal’ says Becker

The 20-time Grand Slam champion was said to be entering the country on the grounds that he had recovered from Covid-19 infection in the last six months – the reason for his medical exemption granted by Tennis Australia – but this was rejected by border officials.

Djokovic provided “minimal” evidence for his exemption, supported by just one doctor, when asked by both border officials and the Victorian government who wanted more proof.

It resulted in his visa being cancelled on Thursday morning, as border officials announced: ““The ABF can confirm that Mr Djokovic failed to provide appropriate evidence to meet the entry requirements to Australia, and his visa has been subsequently cancelled.

“Non-citizens who do not hold a valid visa on entry or who have had their visa cancelled will be detained and removed from Australia.”

The 34-year-old was set to be deported but his lawyers appealed the decision, and Djokovic is now in quarantine in Melbourne’s Park Hotel until Monday, when the hearing will resume at 10am local time.

The Professional Tennis Players Association has now released a statement regarding the world No 1’s medical exemption and visa issues.

The PTPA was co-founded by Djokovic himself, alongside fellow tennis player Vasek Pospisil during the US Open in 2020, as they aimed to “provide players with a self-governance structure that is independent from the ATP and is directly responsive to player-members needs and concerns.”

The Association, governed by a board of nine trustees, addressed Djokovic’s situation on Friday and said: “The Professional Tennis Players Association (PTPA) has been diligently monitoring the detainment of professional tennis player Novak Djokovic by the Australian Government.

“The PTPA has been in close contact with Mr. Djokovic, his family and legal counsel, government officials, and Australian Open leadership.”

They also confirmed that Djokovic said he would be commenting on his “detainment” himself in due course.

The statement continued: “Mr. Djokovic has verified his well-being to us. He has also requested that we allow him to personally share the facts of his detainment in his own words. and in his own time.

“We will continue to support and advocate for our members, and all players, in a manner that is acceptable to them.

“On the Serbian Orthodox Christmas Eve, we are grateful Mr. Djokovic is safe and we are able to communicate with him. We will continue to monitor his health, safety, and well-being. We look forward to his time back on the court.”