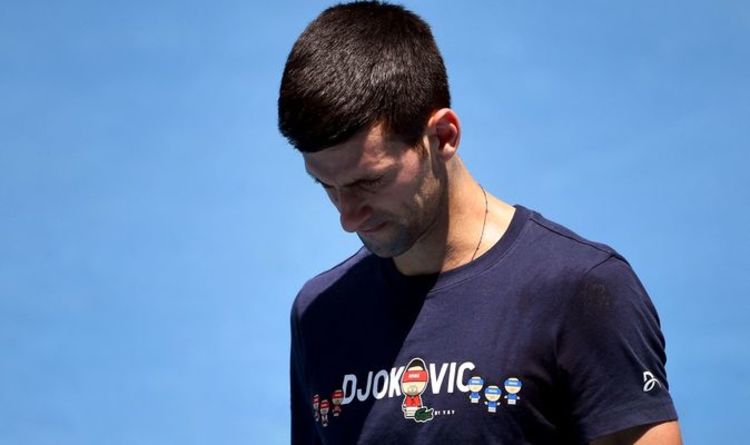 Novak Djokovic has arrived in Australia and hit international headlines ever since. It’s something the world No 1 male player likely hoped to do ahead of his trip Down Under, but for very different reasons. When the story should be about his quest for a record 21st Major singles title, Djokovic has managed to change the narrative entirely through a series of actions that can’t be justified.

The Djokovic fiasco has been likened to a reality TV drama and brought on calls for both a Drive to Survive-style Netflix series – which now looks to be in the works, filming all the chaos Down Under – and a special episode of everyone’s favourite guilty pleasure docu-series about the country’s border force, Border Security: Australia’s Front Line.

When the unvaccinated nine-time Australian Open champion announced last Tuesday that he was flying to Melbourne to compete in the event, he infuriated and disrespected the citizens of the very nation he was headed to, who have spent the better part of two years in strict lockdowns and now require full vaccination to do everything from going clubbing to attending the Aussie Open itself.

But it was only the start of an ongoing saga that has made the world’s current best male tennis player look worse and worse in the eyes of the public.

Just over a week later and the 20-time Grand Slam champion has had his visa cancelled, spent a weekend in a government detention hotel, won an appeal to have his visa reinstated, started practicing on Rod Laver Arena, confirmed he broke Covid isolation rules in Serbia and found out his path to victory in the Australian Open draw – and he still faces being deported before the tournament begins in four days.

To some, including Djokovic’s family and likely even the man himself, this is just another bit of ‘adversity’ the Serb has had to face in his career en route to more records, titles and history, in the same way he has had to overcome rowdy crowds cheering against him in the 2015 US Open and 2019 Wimbledon finals against Roger Federer.

His father Srdjan has gone as far as to compare his son to Jesus, stating in a press conference last week: “Jesus was crucified and everything was done to him, and he endured, he is still alive among us. They are trying to crucify Novak in the same way, to underestimate him, to throw him to his knees, to do everything to him.”

While his nearest and dearest firstly sound completely tone deaf commenting on the rules and procedures that another country has pertaining to its border and travel requirements, their words also show why Djokovic believes he can get away with entering Victoria unvaccinated, when it has been the longest locked-down state in the world, with around 270 days spent under strict restrictions.

A lot of his parents’ criticisms have been based on the fact that Australia’s treatment of their son is even worse because he is “the best athlete, tennis player in the world.” Therefore, it’s no surprise the world No 1 thinks he is bigger than a country’s vaccination rules when that’s what those closest to him are feeding him.

If Djokovic really wants to prove he is a strong-willed person who can overcome adversity, the biggest and best thing to do is hold his hands up, admit he failed to consider everything Australian citizens have been through during the pandemic, and acknowledge that he doesn’t deserve to be an exception to the rule just because he is a world No 1 trying to win his 21st Grand Slam title at the Aussie Open.

Instead, his lawyers are gearing up to appeal a potential visa cancellation for a second time, with Immigration Minister Alex Hawke’s decision now due on Friday, as Djokovic’s team have devised a plan to fast-track an appeal in time for a hearing to be able to conclude before the Australian Open begins on Monday.

Getting his lawyers to appeal for him to stay in the country is another ignorant move considering the basis for his medical exemption given by Tennis Australia is a recent Covid infection, which the federal government does not even accept as valid grounds for unjabbed foreign nationals to enter the country.

And the recent Covid infection itself comes with its own controversies, as a sworn court affidavit during Monday’s appeal confirmed he was both “tested and diagnosed” on December 16, taking a PCR test earlier in the day and receiving notification of a positive result at around 8pm Serbian time.

It meant that Djokovic had the virus both when he attended a L’Equipe interview on December 18 and children’s tennis event in Serbia on December 17, where he posed for photos with the children and presented awards to them, all without wearing a mask.

But in what has been yet another twist to the embarrassing saga, on Thursday, the world No 1 released a statement in which he claimed he did not receive notification of the positive result until after the children’s event on December 17, but admitted to breaking isolation rules by attending the L’Equipe interview the following day.

The statement itself, Djokovic said, was made to address “continuing misinformation about [his] activities and attendance in December in the lead up to [his] positive PCR Covid test result” but really confirmed everything that was being reported at the time in his own words with his own poor justification, and was a poor attempt at clawing back some semi-decent PR by claiming he “tried very hard to ensure the safety of everyone” by… attending public events while being positive.

It comes with even more questions than answers – why did a sworn court document say Djokovic receive his positive PCR result on the 16th when he is now claiming in an iPhone notes statement that he received it on the 17th? Even if he didn’t receive it until the 17th, why didn’t he isolate until receiving the result rather than going and exposing himself to a bunch of children?

It sums up just how disappointing a situation it is – and it’s a lose-lose for Djokovic Down Under.

This Australian Open may seem like his perfect chance to be the first man ever to reach 21 Major titles – especially with fellow 20-time Major champion Rafael Nadal the favourite to win the next Grand Slam tournament at the French Open in June – but a victory for Djokovic at the 2022 Slam would actually be one of the worst losses of his career, serving as a permanent reminder of a privileged tennis player who thought he could get away with it.

Either he sacrifices his global reputation or sacrifices his chance at tennis history. But is that record 21st title worth it when the general public will forever refuse to call you the greatest of all time because of your selfish off-court actions?