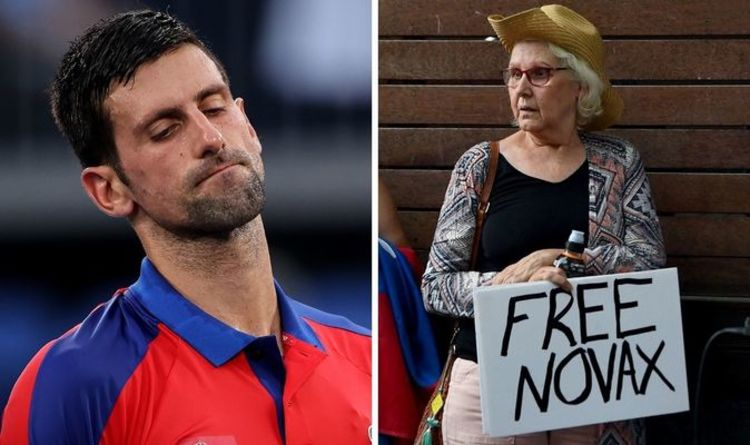 Novak Djokovic looks increasingly unlikely to compete at the Australian Open later this month after his visa was rejected on Wednesday by the Australian Border Force (ABF). And that could well result in the world No 1 losing his top spot on the rankings for the first time since February 2020. Last season belonged to Djokovic on the ATP Tour as the Serbian tennis icon won three of the four majors, only losing to Daniil Medvedev in the final of the US Open.

He’s been largely unchallenged in the rankings for the best part of two years with both Roger Federer and Rafael Nadal suffering injuries.

But the next generation of players have begun to realise their full potential with both Medevedev and Alexander Zverev now hot on the tails of the world No 1 spot.

Djokovic still holds a strong lead heading into the Australian Open this month and he was the big favourite once his participation was confirmed.

However, despite being named on the entry list for the Australian Open back in December, there was still some confusion on whether Djokovic would in fact be able to compete.

JUST IN: Jon Snow wades into Djokovic controversy ‘No one’s too rich or famous’

Tennis Australia originally stated that all players would need to be vaccinated, but then later announced that some would receive medical exemptions.

Earlier this week, Djokovic confirmed his request for a medical exemption had been accepted and was jetting out to Melbourne to prepare for the first major of 2022.

But upon his arrival at the airport, Djokovic was met by ABF officials who revoked his visa application with reports claiming he had applied for the “wrong type”.

After several hours of discussions in a room at the airport, Djokovic was then whisked away to a quarantine hotel while his team of lawyers lodged an appeal to allow him to compete at the Australian Open.

If that fails though, Djokovic faces the very real possibility of also losing his No 1 status on the ATP Tour.

Djokovic opted to skip this year’s ATP Cup, which will result in the Serbian losing 665 points this coming Monday.

And if he misses out on competing at the Australian Open, Djokovic’s points tally will drop down to 8,875.

That puts both Alexander Zverev and Daniil Medvedev in range of overtaking the 20-time major winner.

Medvedev can win a maximum of 9,550 points by the end of the Australian Open if he is able to repeat last year’s success at the ATP Cup as well as clinching his first major title Down Under.

Zverev is already set to lose some points after Germany were knocked out of the ATP Cup quarter finals, but could still overtake Djokovic if he wins the Australian Open too.

The 24-year-old lost to Djokovic in the quarter-finals last year, but a first Grand Slam Down Under could see Zverev take the No 1 spot in the rankings.

If both Medvedev and Zverev compete in the final – a real possibility if Djokovic is unable to play – then both players could theoretically overtake Djokovic in the rankings.

It would be the first time Djokovic drops out of the top two spots since September 2018.