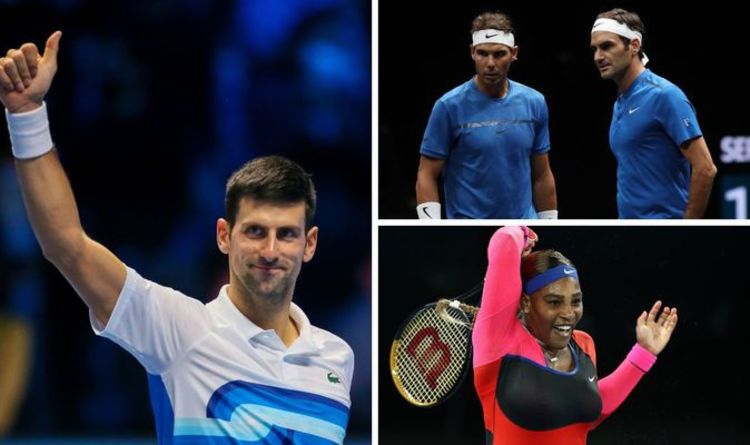 Novak Djokovic has been tipped to surpass not only his long-time rivals Roger Federer and Rafael Nadal, but Serena Williams to become the GOAT of tennis. Former world No 4 Greg Rusedski believes the Serb is motivated to break all the big records in the sport after achieving a record weeks at No 1 and year-end No 1 finishes in the men’s game.

Djokovic is currently competing in the last ATP Tour event of the season – the Nitto ATP Finals.

The 34-year-old is already through to face Alexander Zverev in Saturday’s (November 20) semi-final, and is looking for a sixth title at the season-ending championships, which would see him equal Roger Federer’s record.

He has already written his name in the history books multiple times this season – surpassing Federer’s record for most weeks at world No 1 earlier this year, tying Federer and Rafael Nadal on a record 20 Grand Slam titles, securing the year-end No 1 ranking for a record seventh time and becoming the first man to win 37 Masters 1000 titles, beating the record of 36 that he previously shared with Nadal.

The world No 1 also fell one match short of winning the US Open in September, which would have given him a record 21st Major title and made him the first man in 52 years to win the Calendar Grand Slam.

Now, retired British No 1 Greg Rusedski has tipped Djokovic to continue breaking records across the sport in order to become the undisputed GOAT.

“I think Djokovic is the man to beat,” he said, speaking exclusively to Express Sport on who will end their career as the greatest player of all time.

“He’s healthy. Roger we know is on the sidelines at the moment, he’s talked about coming back and going to give it as long as he needs to. Rafa’s got a bit of a foot problem he’s struggling with and Djokovic is just looking supreme.

“I mean he nearly won the Calendar Slam this year, one match away, nobody’s really done that since 1969 which is incredible. And he’s still the man to beat.”

The 1997 US Open runner-up warned that the Serb’s crowd would be under threat, though not by his usual Big Three rivals.

“That next generation has arrived finally, it’s taken long enough, but Djokovic doesn’t want to give away his pedestal.”

Although Rusedski thought the world No 1 would face resistance from the new generation of players occupying the top ten with Djokovic and joining him at this week’s ATP Finals, he said the Serb was motivated by coming the greatest of all time.

“He wants to be the best male tennis player. Best in the men’s game and the women’s game,” he declared.

“Because the record for Slams is 24 by Margaret Court. End of season No 1s I believe is Steffi Graf with eight year-end No 1s, he’s done it seven times.

The former world No 4 also said he believed Djokovic’s goal was to get 25 Grand Slam titles “because it becomes undisputed in any category that he’s the greatest of all time”, and backed the 34-year-old to reach the record, surpassing even Serena Williams.

The ATP Finals can be watched exclusively on Amazon Prime Video in the UK at no extra cost to Prime members from 14 Nov to 21 Nov.