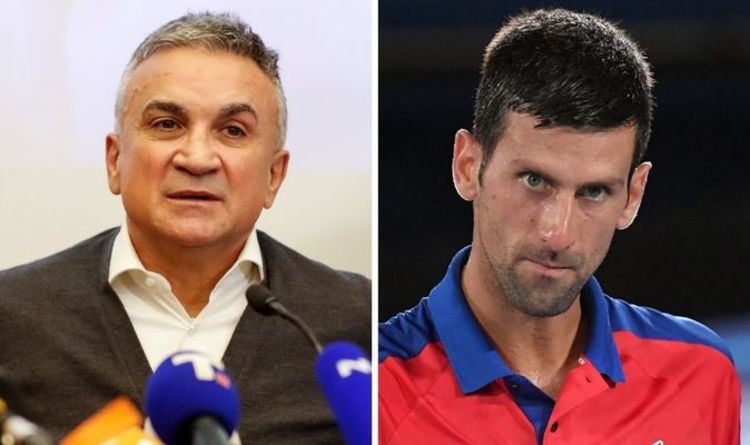 Djokovic's brother says star is back on tennis court

The inability of the Australian Government, Tennis Australia and the Victoria government to sing from the same songsheet over whether he should be in the country or not has been a shambles.

Whatever you may think of Djokovic’s anti-jab stance – selfish, cavalier and foolhardy makes for a reasonable starting point – he has been treated abominably Down Under.

When a player receives a medical exemption to play in a tournament, issued by the organisers and backed up by the local authority, he should have every right to expect that to be honoured. Instead Djokovic has been subjected to an ordeal which shames Australia.

What sort of host sends out a party invitation and then tells their guest they can’t come in at the door?

JUST IN: Farage speaks out against ‘leftie’ Twitter critics over Djokovic views

Until the country’s federal system and its sporting bodies can establish a Covid commonality every sporting event played in Australia will have the same potential for chaos hanging over it.

Djokovic, as one of the highest-profile sportsmen in the world, has been deliberately played for political gain by Australian Prime Minister Scott Morrison.

It is true that he made for an inviting target. Few countries have locked down harder or for longer than Australia so the sound of the unrepentantly unvaccinated Djokovic loudly trumpeting his impending arrival on a medical exemption on social media was a clarion call to the border force sniffer dogs.

But while the Victorian court’s decision to overturn Djokovic’s visa revocation may have come on a technicality, the exasperation of Judge Anthony Kelly at the behaviour of the federal authorities was clear.

Removing his phone and passport and being told at 4am he had 20 minutes to gather evidence to support his claim to stay effectively reduced the best tennis player in the world to criminal status.

For Djokovic, the whole charade will be fuel to the fire. For a player who has spent his career as the outsider in the affections of the public – the anti-Rog and Rafa – the sense that the world is against him will be familiar. It has stoked him before

You just know that unless Australia’s immigration minister presses the nuclear button and deports him, Djokovic is going to win the Australian Open.

He might have done so in ordinary circumstances – he usually does – but the unprecedented circumstances of his detention and court case ahead of the tournament will provide the Serb with a singularity of purpose he can rarely have felt before.

Four days cooped up in a ropey quarantine hotel is not ideal preparation for a Grand Slam. Neither is a dose of Covid. But once the immediate trauma of this episode has eased it will be replaced by a renewed drive to prove a point in Melbourne next week.

There are few more stubborn and determined individuals in sport and if he can win his 10th Australian Open in these circumstances – and become the greatest collector of Grand Slams in history – this will be Djokovic’s most satisfying triumph of all.