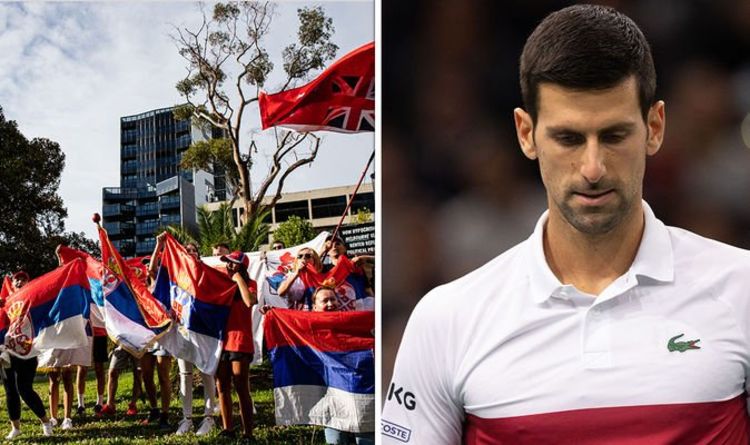 Novak Djokovic is 'fighting a losing cause' says Magee

Novak Djokovic has been released from detention after a judge overturned the decision to cancel his visa. The tennis star now looks free to play this month’s Australian Open but has been warned the ‘stakes have risen’ now and could be detained once again.

Djokovic has been held in an immigration hotel for three days in a room where the windows do not open after being taken in by Border Force on his arrival to Australia earlier last week.

The 20-time Grand Slam winner travelled to Australia under the premise that he had a medical exemption to enter the country without being vaccinated against coronavirus.

He is hoping to compete at the Australian Open on January 17, a tournament he has won on nine occasions.

The Serbian was facing the prospect of being sent packing if the courts ruled in favour of the Australian government this afternoon, but was given a reprieve with a judge ordering the star to be released from detention.

Djokovic is now free to compete the Australian Open, but could still face deportation with another court case on the cards. Stay tuned below for all the very latest in this extraordinary case Down Under.

Djokovic told officials in Australia last week that he is not vaccinated, according to reports.

The Serb has spoken out against vaccine mandates on a number of occasions.

Novak Djokovic is facing a three year Australian Open ban, despite winning the appeal against the overturning of his visa.

This is because Australia immigration minister Alex Hawke can now intervene and could re-cancel the tennis player’s visa.

The tennis player has been informed that he could still lose his battle to compete at this year’s Australian Open after the cancellation of his visa was controversially overturned on Monday.

This suggests that his bid to seal a place at this month’s tournament could still be thrown out in spite of Monday’s ruling.

Judge Anthony Kelly went on to comment: “In a view, the stakes have risen rather than receded.”

The Australian Open is only a week away.

This could mean, despite the court deciding to allow Mr Djokovic to receive his visa, Mr Hawke could rescind it.

Judge Kelly said: “In a view, the stakes have risen rather than receded.”

Judge Anthony Kelly concludes the proceeding by revoking the the decision to cancel Mr Djokovic’s visa.

Judge Kelly also ordered government to pay costs and Mr Djokovic to be released from detention in 30 minutes.

The court has returned from the extended ajournment.

Novak Djokovic’s lawyers confirm the tennis star is in the room with them.

Judge Kelly then extended it until 8pm.

The court returned to a temporary adjournment.

The court is back in session!

The hearing has resumed.

A white van has left the Park Hotel, reports claim, but it has not been confirmed if tennis star Novak Djokovic was in the vehicle.

The tennis pro was allowed to leave to another, unknown address, so he may watch the court proceedings remotely.

If the appeal is not finalised Mr Djokovic will return to the hotel tonight.

The case is resuming in another 20 minutes

Mr Djokovic’s case is due to resume in another 20 minutes.

The tennis star has been allowed to leave the Park Hotel for the duration of the court case, where he has been forced to remain ever since his visa was rejected.

However, most of the time Mr Djokovic will spend with his lawyers watching the stream.

The court has adjourned

The court has been adjourned until 3:15PM AEST, which is an hour and 15 minutes.

Novak Djokovic’s Serbian lawyer Goran Draganic has been speaking to Serbian TV during the hearing about the tactics his representatives may use.

He said: “The first thing is that Novak was given the regular visa for Australia in November.

“He got the medical exemption on December 30. That exemption is based on the verification of two independent medical panels – the first by Tennis Australia and the second by the Victorian government.

“So, he could travel based on the second verification. Two days later, Novak gets the formal document from the Department of Home Affairs that he can freely travel to Australia.

“I am sure the legal team in Australia will also use serious procedural shortcomings during his questioning.”

On Sunday Judge Kelly ordered for Djokovic to be allowed to leave the Park Hotel to view the hearing, it has been revealed.

“The respondent, by her servants or agents, including the Australian Border Force, take all steps and do all things as may be necessary to bring the applicant to premises as specified by the applicant’s solicitors on Monday, 10 January 2022 (and each day thereafter, including upon the delivery of judgment), to permit him to remain there until the conclusion of each hearing and to secure his safe return to detention upon the conclusion of each hearing.”

The stream has been down for almost half an hour now.

Read everything the judge had to say on Djokovic’s visa being overturned here.

“And in relation to any other action the government may undertake, I mean, that’s purely a matter before the courts at the moment.

“But in relation to the government – our government, the federal government’s advice to Tennis Australia, that was set out very clearly in November. And I read the extract from this very podium. It could not be more clear.”

The court is suspended for the time being because the live stream is down again.

The judge says some “smarta***” has knocked the bandwidth off.

Djokovic’s team argue that he could have got more documents if he was allowed his phone back in the airport.

Judge Kelly claims Djokovic had his medical exemption in hand after two separate medical boards in Australia granted it.

He appears to show some sympathy for Djokovic.

The judge said: “The point I’m agitated about is what more could this man have done?”

Judge Kelly has referenced comments Djokovic made to an immigration official as he attempted to clear up the situation at Melbourne Airport.

He apparently said: “If you will let me talk to people, even though you have taken my phone from me, I will get you what you want.”

It could be a long one

Djokovic’s barristers have suggested they may ask for an extension to their defence deadline, which is currently set for 2.45am GMT.

The judge hinted there would be no problem saying “we’ll cross that bridge when we come to it.”

The prosecution are due to lay out their case at 3am.

We could be here for the long haul.

Djokovic’s barrister Mr Wood is claiming the delegate who cancelled the visa used a “mash-up” of two different grounds.

“It’s a confusing blend of two distinct grounds of cancellation,” he tells the court.

Novak Djokovic’s camp have started to set out their case and Judge Kelly is quizzing them about the timing of notice to cancel his visa.

However, he is not having any acronyms.

“There’ll be no noics, there’ll be no oinks and there will be nothing else of that nature,” the judge says in relation to the Notice of Intention to Cancel.

The hearing has got underway in Melbourne but there are no journalists in the room so there may be a delay in information coming out.

The court is running a digital-only hearing – but the live stream service is still down!

Just when you think this can’t get any weirder…

Court has not yet begun

Thousands are left staring at this screen, waiting for it to load into the court room.

A court spokesperson has confirmed that the hearing has not yet started.

Just minutes before the live stream was supposed to start the website has crashed.

You can only imagine that the servers are struggling to deal with the huge demand.

The court is investigating the issue and hope to have a resolution soon.

When it does load up again, here is who will be representing both parties.

Murray said: “I think everyone is shocked by it [the circumstances] to be honest.

“I’m going to say two things on it just now. The first thing is that I hope that Novak is OK. I know him well, and I’ve always had a good relationship with him and I hope that he’s OK.

“The second thing I’ll say on it … it’s really not good for tennis at all, and I don’t think it’s good for anyone involved.

Rafael Nadal had a little sympathy for Novak Djokovic earlier this week but he underlined that the problem was all the world No 1’s own doing.

“Of course I don’t like the situation that is happening. In some way I feel sorry for him.

“But at the same time, he knew the conditions since a lot of months ago, so he makes his own decision.”

Saga could rumble on

The judge is expected to make a decision on Djokovic’s case tonight but that does not necessarily mean the saga will be over.

This could just be the start of a very long road as the Australian government has warned they may appeal a decision if it falls on Djokovic’s side.

The government attempted to delay to hearing until Wednesday but their request was rejected.

And in their written response they warned of their right to launch an appeal.

As if this story is not strange enough, British politician Nigel Farage has travelled to Serbia to be with Novak’s brother Djordje as they wait to hear the outcome of the court case.

Farage, who is extremely vocal about Britain having a hard border, is siding with Djokovic in this battle.

Earlier this week he tweeted: “His wallet has been taken, his mobile phone has been taken he has been put into a run down hotel which is more akin to a prison!”

He added: “And worst of all, the Australian Home Affairs Minister, Karen Andrews gives a press statement and says he is free to leave when he likes.

“Well that is not the true situation! Absolutely not!”

Novak Djokovic sets off for court

Minutes ago the world No 1 left has apparently left his hotel for the first time in three days.

The Australian government are hoping they can eject the 20-time Grand Slam winner after an injunction was filed stopping them from doing so until the matter has been decided by a judge.

Stay tuned for all the latest from this extraordinary story.