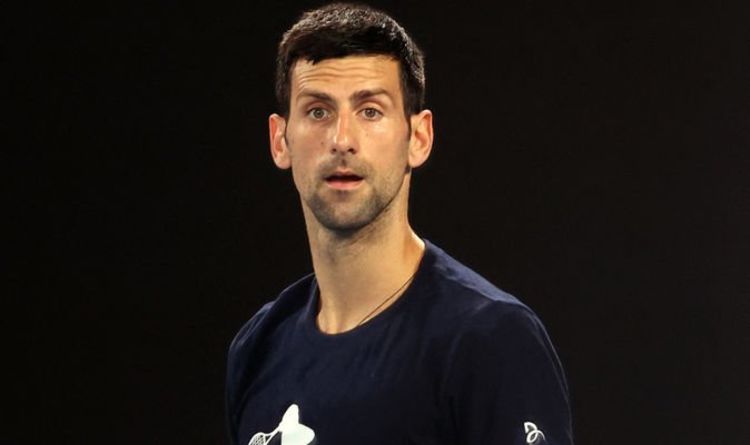 Novak Djokovic faces the likelihood of not being permitted to defend his Australian Open crown after having his visa cancelled for a second time. The decision is set to bring an end to months of uncertainty over the Serb’s participation in the season-opening Grand Slam in Melbourne, where he is a nine-time champion.

However, Djokovic’s legal team are preparing to file an immediate injunction against the decision.

Immigration Minister Alex Hawke spent several days weighing up whether or not to revoke Djokovic’s visa and decided to use his personal power to overrule the court on Friday.

In a statement, Hawke said: “Today I exercised my power under the section 133C(3) of the Migration Act to cancel the visa held by Mr Novak Djokovic on health and good order grounds, on the basis that it was in the public interest to do so.

“The decisions followed orders by the Federal Circuit and Family Court on 10 January 2022, quashing a prior cancellation decision on procedural fairness grounds.

“In making this decision, I carefully considered information provided to me by the Department of Home Affairs, the Australian Border Force and Mr Djokovic.

“The Morrison Government is firmly committed to protecting Australia’s borders, particularly in relation to the COVID-19 pandemic.

“I thank the officers of the Department of Home Affairs and the Australian Border Force who work every day to serve Australia’s interests in increasingly challenging operational environments.”

The move means Djokovic’s quest to win a 10th Australian Open is in serious doubt, with the tennis star facing deportation if he cannot win in court again.

The Serb was initially allowed to remain in Australia after a judge overturned a decision to cancel his visa following his detention on arrival to the country.

However, Djokovic, who admitted to Border Force that he is not vaccinated against Covid-19, must now return to court if he is to stand any chance of competing at Rod Laver Arena.

Djokovic’s lawyers will have to file an appeal immediately as the world No 1 could be kicked out of the country within hours.

Any appeal would need to be heard over the weekend with the tournament beginning on Monday.

The Djokovic saga has overshadowed the season-opening Grand Slam and threw the draw into chaos this week. Djokovic had been drawn to play fellow Serb Miomir Kecmanovic despite uncertainty over his place in the tournament.

Djokovic believed a Covid infection in mid-December met the conditions for foreigners entering Australia, but authorities have now cancelled his visa on the basis that it was not a valid exemption.

It has been a turbulent time for the world No 1, who had to come out earlier this week to publicly admit he broke Covid isolation rules in Serbia and made errors on his travel form into Australia after Border Force launched an investigation.

Djokovic’s form claimed he had not travelled anywhere 14 days prior to entering Australia despite having been to Spain and insisted this was a ‘human error’ made by his agent.

He had been training on the court on Wednesday and Thursday in preparation of defending his Australian Open title but that now appears to be out of the question.

Djokovic could face a three-year ban from Australia if his appeal is unsuccessful in court, though that can be waived.

The tennis star’s lawyers are hoping their appeal can be heard in court over the weekend and finalised on Sunday.

The case may now return to Federal Circuit Court Judge Anthony Kelly (who overturned the cancellation the first time) but he is expected to refer it to the Federal Court. Reports in Australia claim there was a justice on standby to hear the case in the eventuality that Hawke decided to cancel Djokovic’s visa.

January 14, 2022 Tennis Comments Off on Novak Djokovic faces being kicked out of Australian Open as tennis star has visa cancelled
NFL News