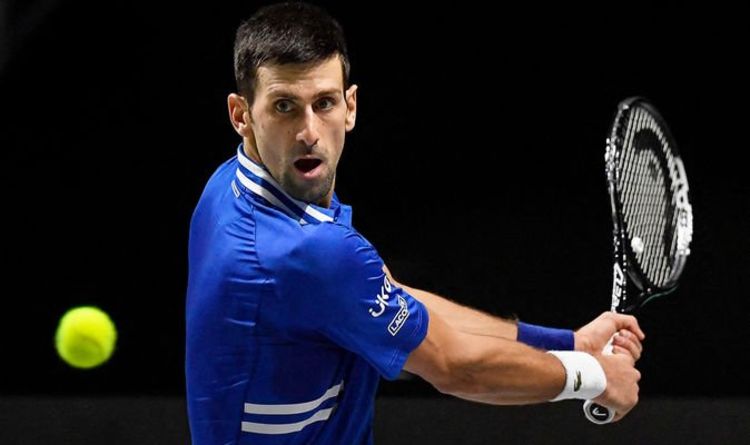 Novak Djokovic has broken his silence following the court ruling which saw the cancellation of his visa overturned. Djokovic appealed against the decision last week to revoke his visa to enter Australia. The world No 1 was confined to a quarantine hotel before his hearing was held on Monday.

Djokovic won the appeal, meaning he was able to leave the accommodation which had received strong criticism from his family.

The 34-year-old is hopeful of participating at the Australian Open, which starts next Monday.

And he took to social media to thank Judge Kelly for overturning the decision.

Djokovic tweeted a picture of himself and his support staff at Rod Laver Arena, writing: “I’m pleased and grateful that the Judge overturned my visa cancellation. Despite all that has happened, I want to stay and try to compete @AustralianOpen I remain focused on that. I flew here to play at one of the most important events we have in front of the amazing fans.

“For now I cannot say more but THANK YOU all for standing with me through all this and encouraging me to stay strong.”

There are still doubts over whether Djokovic will be allowed to compete at the first Grand Slam of 2022.

The Serbian has won the tournament more than any other male player, and will be hoping to be victorious in Melbourne for a 10th time this year.

However, Australia immigration minister Alex Hawke still has the power to take the case back to court and cancel the visa.

If that happens, Djokovic could be banned from entering Australia for three years.

Djokovic’s brother Djordje thanked the people who have supported his family along the way and said justice had been done.

He said: “In the end he won. Justice has won and the rule of law has won.

“I would like to thank you so many of you for coming here.

“We wanted to get as clear as situation as we could about what is happening at the moment.

“We as a family have found it very difficult. We are subjective we are very emotional about my brother.

“It’s very difficult to defend Novak and not to offend anyone at the same time.

“I would like to thank people across the world who have organised. We have seen wonderful scenes to far away Melbourne, where hundreds of people gathered.”