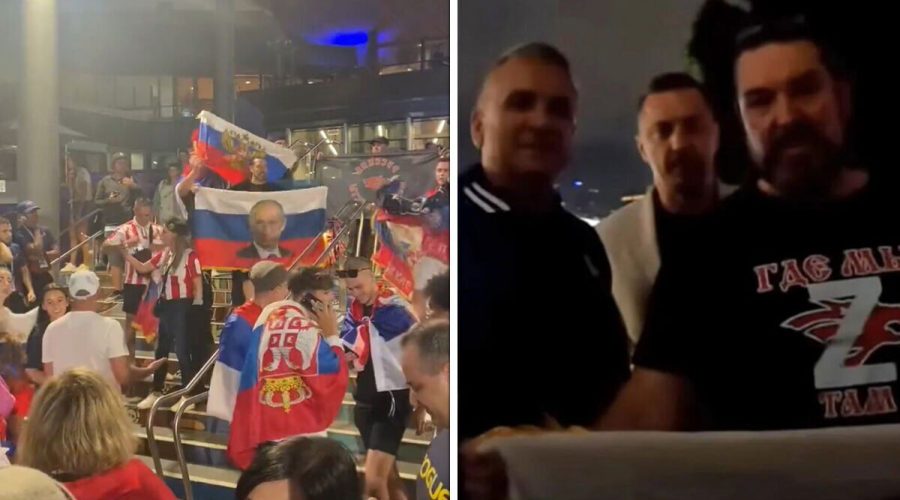 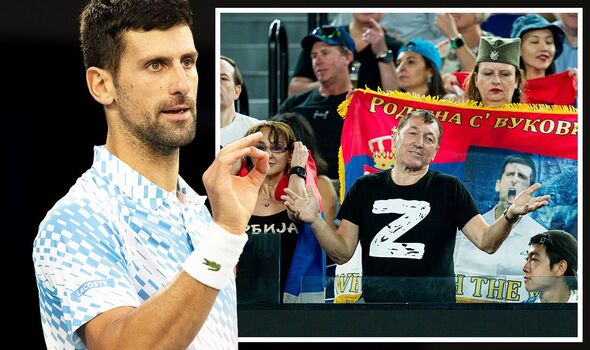 Novak Djokovic and his family have been warned about their conduct after his father was filmed posing with pro-Putin Russians at the Australian Open. Four men were detained and evicted for flying a Russian flag showing the face of President Vladimir Putin after the Serb’s quarter-final victory on Wednesday night.

And a video posted later on YouTube showed Srdjan Djokovic with a nationalist fan holding a flag and wearing a Z-shirt in support of the invasion of Ukraine. The YouTube channel called Aussie Cossack translates Djokovic Sr saying: “Long live Russia.”

Unlike Wimbledon, players from Russia and Belarusia are allowed to compete here under a neutral flag but national symbols are forbidden following the invasion of Ukraine.

The incidents have caused embarrassment to tournament organisers and caused security to be stepped up. But tournament boss Craig Tiley, who tried to get Djokovic into the event on a medical exemption last year, has decided not to sanction Srdjan Djokovic.

A Tennis Australia statement said: “A small group of people displayed inappropriate flags and symbols and threatened security guards following a match on Wednesday night and were evicted. One patron is now assisting police with unrelated matters.

“Players and their teams have been briefed and reminded of the event policy regarding flags and symbols and to avoid any situation that has the potential to disrupt. We continue to work closely with event security and law enforcement agencies.”

A fan wearing a Z tee-shirt was also filmed in the Rod Laver Arena during Serb Novak Djokovic’s win over Russian Andrey Rublev in the quarter-finals.

Former Ukrainian pro Alex Dolgopolov, who is now fighting in the war in his homeland, tweeted: “This guy will get banned for life, at least for all Australian events, right? @AustralianOpen”.

Ukrainian ambassador Vasyl Myroshnychenko said: “It’s a full package. Among the Serbian flags, there is a Russian flag, Putin, Z-symbol or chanting pro-Russian songs. It’s such a disgrace.”

Aussie Cossack is run by Putin supporter Simeon Boikov. Before the quarter-final on Wednesday night, he had called on Russian supporters to “strike back” at the Australian Open by banning flags.

“The Russian empire has had its flag banned,” he said. “Well guess what Tennis Australia? Good luck when the empire strikes back.”

Security guards have been issued with tougher guidelines regarding bringing flags and national symbols into Melbourne Park with Russian Karen Khachanov facing Stefanos Tsitsipas of Greece in the first men’s semi-final on Friday.

Nine-time champion Djokovic will return to action in his 44th Grand Slam semi-final against American Tommy Paul on Friday.

Back in July, Djokovic pledged to send support to Ukrainian former tennis player Sergiy Stakhovsky after the former world No.31 joined the country’s army.

But last month Stakhovsky published conversations he had with Janko Tipsarevic and Viktor Troicki after the Serbs playg a Russian exhibition event held in St. Petersburg.

The Ukrainian criticised the Serbs for taking Russian money but Tipsarevic responded: “Really? How about this Mr Instagram Freedom Fighter. Did you or any of your f****** family members boycott or protest in any capacity when NATO forces bombed by country, my family and my people somewhat 20 years ago.”