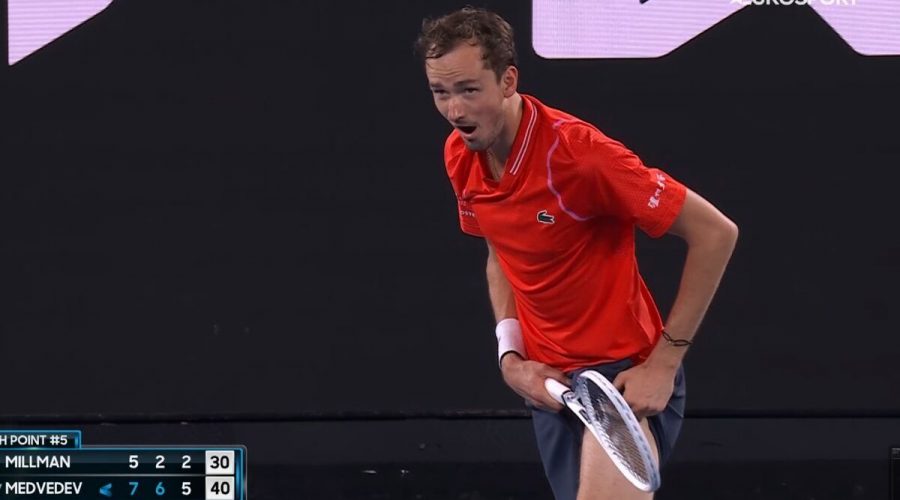 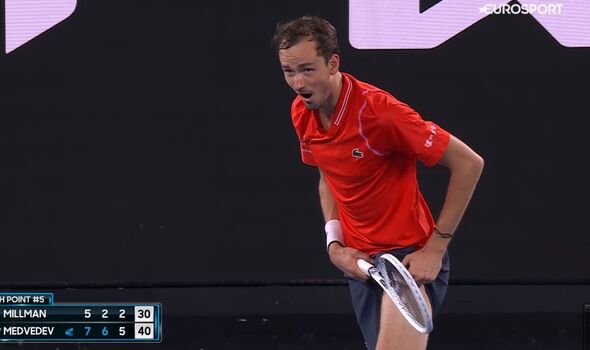 Daniil Medvedev celebrated his 7-5 6-2 6-2 victory over John Millman at the in a bizarre way, as he lifted up his shorts to reveal his thigh and put on a shocked face after booking his spot in the third-round of the Australian Open. The seventh seed then explained that he was trying to mock himself in relation to Marton Fucsovics after the world No 78 showed off his “ripped” body following his own win.

Medvedev is known for his unique celebrations, first becoming famous for failing to show emotions after a victory before he used the ‘dead fish’ after winning his maiden Grand Slam title at the 2021 US Open. And the former world No 1 whipped out a new move at the Australian Open on Wednesday as he exposed his thigh after defeating home hope Millman in straight sets.

The world No 8 was then asked about the bizarre move, and immediately made reference to Fucsovics, who celebrated his first-round victory over Federico Coria by taking off his t-shirt and flexing his muscles as fans raced to social media to comment on his “ripped” physique. “This match I felt amazing physically. Probably a lot of people saw on social media photos of Marton after his match,” the 26-year-old said when asked about his own celebration.

“Fucsovics?” Jim Courier asked, before remarking on the Hungarian’s body himself. “Yeah, who looked like Thor,” he laughed.

JUST IN: ‘You should ask Nick Kyrgios’ – Thanasi Kokkinakis in awkward exchange

The 15-time title winner also cracked a joke to Courier, who he peviously said he was excited to see again during the on-court interview for his first-round match on Monday. “Also I have to ask you Jim, last year I played all my matches on Rod Laver and I think almost all of them you interviewed me after the match,” he said.

“I play on Margaret [Court Arena] and it’s still you, you follow me. I’m happy about it,” Medvedev laughed.

“You can’t shake me man, I’m like glue,” Courier responded. And Medvedev added: “I see it, I see it but I’m happy to see you.”

It comes after the seventh seed admitted he was thinking about the former pro-turned-pundit during his first-round match against Marcos Giron. When Courier stepped onto the court to interview the two-time finalist in Melbourne, Medvedev told him: “First of all, I’m really happy to see you, During the match when I was leading two sets to love, I was thinking to myself, ‘Is Jim here?'”