Alexei Popyrin has sensationally dumped Taylor Fritz out of the Australian Open for his second top-10 scalp this year to storm into the third round and equal his best grand slam result.

It was the wildcard’s second five-set triumph in as many matches after rallying from two-sets-to-one down to score a memorable win over Taiwan’s Chun-hsin Tseng in the early hours of Wednesday.

Popyrin also made the last 32 at Melbourne Park in 2019 and 2020, a feat he has also achieved twice at the US Open, but he has never gone further.

“This win means so much to me,” an emotional Popyrin said. “I had the toughest year last year and didn’t win many matches. I’ve won [almost] as many matches this year [four] as I did the whole of last year – and it’s only January.

“In the pre-season, I put my head down and worked as hard as I could. I don’t want that feeling I had last year ever again … I love this feeling and want more of this feeling.” 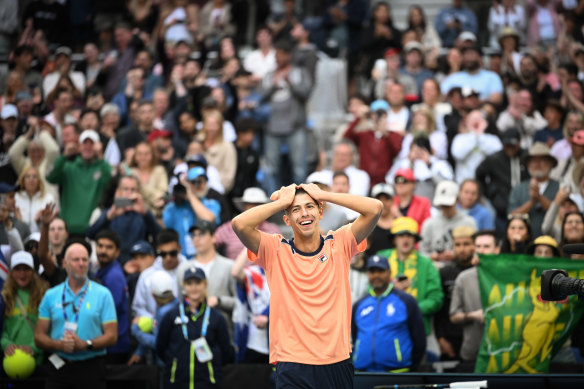 After saving a break point in the opening game of the final set with one of his 19 aces, Popyrin, who is back in the top 100 in the live ATP rankings, swung the four-hour-plus match in his favour three games later with a brilliant reflex volley winner.

He went on to clinch the decisive break soon after with a superb drop shot – in contrast to the ball-mashing that got him to that point – and Fritz could not chase it down.

Popyrin did not wobble down the stretch, impressively completing the most significant victory of his career with another bombastic forehand on his second match point.

The 2017 French Open junior champion said in Adelaide a fortnight ago, after defeating then-world No.6 Felix Auger-Aliassime, that he wanted those kinds of wins to become the norm.

He now has another high-profile victim to back up that bold ambition, and it could prove the impetus for him to realise his immense potential. 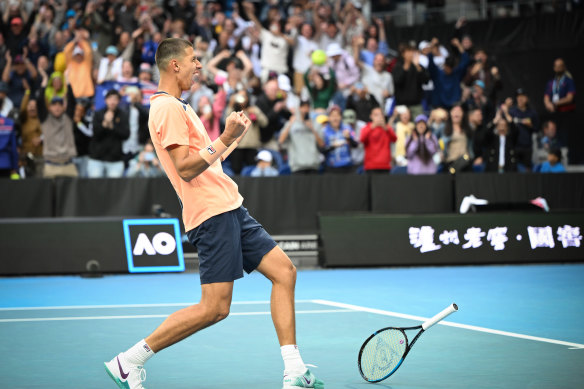 Fritz joins top seeds Rafael Nadal and Casper Ruud in suffering a shock early exit from the Open, and he sought a medical timeout after the third set for a right foot issue.

He was one of the rare Americans not to reach the last 32, with compatriots Mackenzie McDonald, Frances Tiafoe, Seb Korda, Ben Shelton, J.J Wolf, Tommy Paul, Jenson Brooksby and Michael Mmoh already there.

Popyrin began to work his way on top of Fritz in the second set but could not capitalise on three break points in the sixth game and had to settle for a second straight tie-breaker. 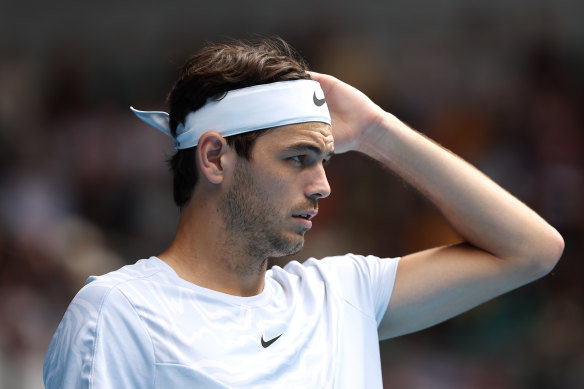 Eight seed Taylor Fritz joined those on the sidelines this year.Credit:Getty Images

That is where he truly came to life, starting with an outrageous inside-out forehand winner that helped him scorch to a 5-1 lead in the tie-breaker before locking the match at a set-all.

Popyrin did not drop a point on serve in the third set and broke Fritz in the third game as he cruised to a two-sets-to-one edge, but the American saved a match point on his way to forcing a deciding fifth set.

The young Australian’s strong start to this year contrasts wildly with his horror 2022 campaign.

The 23-year-old won only five of 22 matches and slumped from a career-high ranking of No.59 to outside the top 130 at one stage.

Popyrin knew something needed to change, and he appointed former Belgian star Xavier Malisse as his new coach in October and the move has already paid huge dividends.

The news was not so good for Queensland wildcard Kim Birrell, who went down to 17-year-old Czech sensation Linda Fruhvirtova in straight sets in their second-round match.

Birrell was bidding to reach the third round at her home grand slam for a second time after achieving that feat four years ago, but Fruhvirtova proved far too good in a 6-3, 6-2 result.

The 24-year-old’s defeat means no Australian women will advance to the third round, but she will still climb to a career-high ranking of about 150 after the Open.