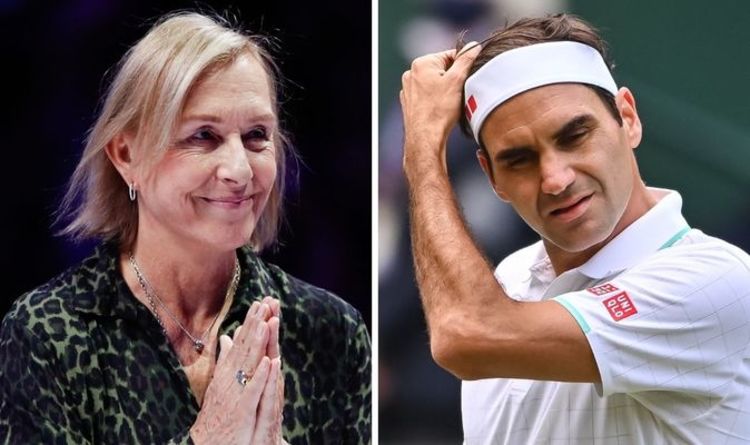 Martina Navratilova believes ‘Father Time’ may finally be catching up with Roger Federer after the 39-year-old exited Wimbledon in the quarter finals on Wednesday. Federer had made no secret that Wimbledon was his big goal for coming back from his long injury lay off.

A shaky opener against Adrian Mannarino was soon followed by impressive wins over Richard Gasquet, Cameron Norrie and Lorenzo Sonego.

But his toughest test was to come against No 14 seed Hubert Hurkacz, who had defeated world No 2 Daniil Medvedev in the previous round.

Still, Federer was seen as the favourite for the match as he bid for another semi final at Wimbledon.

What transpired on Centre Court though caught everyone by surprise as Hurkacz made light work of the eight-time Wimbledon champion.

JUST IN: Princess Beatrice ‘bump-touching’ is ‘reminiscent of Meghan’

The Poland tennis star completed the rout in less than two hours as well as inflicting the first bagel on Federer in his career at Wimbledon.

Federer was then asked about the possibility of retirement following the shocking manner of his exit, to which he admitted discussions will be had with his team on his next step.

And Navratilova, who won a record nine Wimbledon titles in her career, believes Federer will have a difficult decision to make.

“Things are complicated because of COVID,” she said on BBC.

“So there’s another unknown you have to deal with. Do you really want to give up your family so that you can play tennis because at least he had his family with him.

“That’s a big part of it I think but Roger lost a year because of surgery so he didn’t lose anything tennis wise really.

“But he is now two years older than he was at the last Wimbledon.

“So it’s a combination: the two surgeries, he got his body together and the knee is fine, but he’s two years older so it’s father time I think catching up.

“No matter how much he works, he can not get any younger.

“Also, he maybe wants to work harder but your older so you can’t work as hard as you really want to.

“So it just gets complicated and maybe father time is finally catching up.

“His weaknesses were shown yesterday and also another thing that happens when you’re older and have a slightly off day, it’s a worse off-day than it was 10 years ago.”