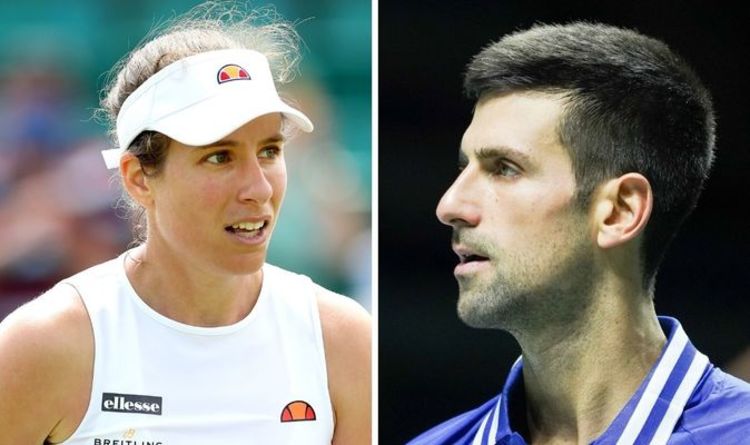 Konta, who is the former World Number 4, is a guest on ‘James Martin’s Saturday Morning’ from 9:30am on ITV. The show sees television chef James Martin cook up recipes perfect for the weekend, and impart cooking tips to his special celebrity guests and viewers at home. This week, the chef will be serving up delicious dishes alongside Konta, with the pair tasting recipes from the likes of Lesley Waters and Andres Alemany.

Konta is no stranger to the kitchen, with the former British Number 1 having been known in the tennis world as a keen chef.

During the first coronavirus lockdown she even cooked up roast dinners, pork belly and steaks with homemade sauce for her photographer husband Jackson Wade.

However, when Djokovic asked to try some of Konta’s food during the 2018 Italian Open, the Briton was brutal in her response.

According to the Times, Djokovic had overheard Konta talk to the press about baking.

The World Number 1 asked her: “Can I experience your cooking one day?”

Konta answered: “To be fair, it’s my parents and my boyfriend who say it’s good, so they are a bit biased. But I’ll bring stuff in.”

Djokovic said, “Please, at Wimbledon” to which Konta replied: “I need to know what you’re allergic to or don’t like.”

The Serbian said: “[I like] anything that is gluten free, dairy free or sugar free.”

Konta savagely responded: “Ok f*** off, I will make it work.”

In December, Konta, who was one of the most successful British tennis players in the modern game, announced her retirement from the sport aged just 30.

She was the first British woman in more than 30 years to reach a grand slam quarter final, while she contested three semi finals in total, including at Wimbledon in 2017.

Only weeks after calling time on her tennis career she also announced she had married Mr Wade.

Meanwhile, Djokovic made headlines this week after having his visa to enter Australia suddenly revoked on his arrival to Melbourne.

The Serbian, who won last year’s Australian Open, was held in the airport for hours before border officials informed him he had not met entry rules.

Though Djokovic has not spoken about his vaccination status, last year he said he was “opposed to vaccination”.

However, the athlete was thought to have been given an exemption to play at the tournament.

This caused huge backlash in a country that had to endure some of the world’s tightest restrictions and where over 90 percent of those over 16 are double jabbed.

Djokovic was taken to a government detention hotel while a court will decide on whether he will be deported on Monday.

Australian Prime Minister Scott Morrison stressed that no-one was exempt from the country’s laws and added that Djokovic’s vaccination stance had drawn attention.

Speaking to reporters Mr Morrison said: “When you get people making public statements ‒ of what they say they have, and what they are going to do, and what their claims are ‒ well they draw significant attention to themselves.”

In response, Serbian President Aleksandar Vučić said Djokovic was a victim of “harassment” and that he had the support of “the whole of Serbia”.

Mr Morrison denied the saga was because of “any particular position in relation to Serbia.”

Watch ‘James Martin’s Saturday Morning’ from 9:30am on ITV.