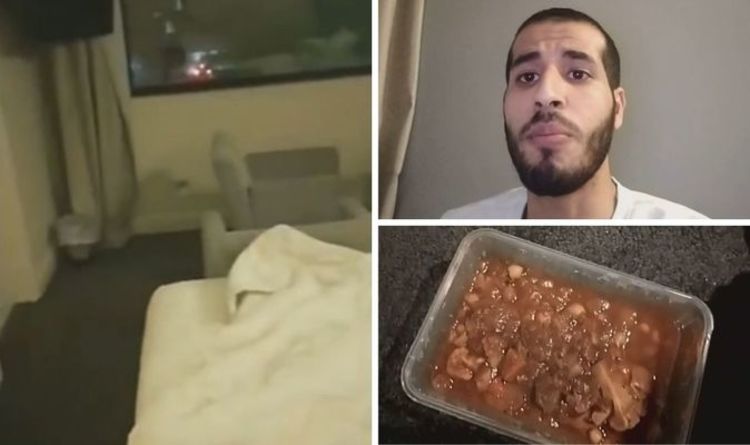 A refugee living in the same accommodation given to Novak Djokovic in Australia has described what the conditions are like for himself and other asylum seekers held at the country’s border. Adnan Choopani, who has lived at the Park Hotel in Carlton for several months, also shared footage of his room and the food he is served.

The hotel’s latest ‘guest’ is world number one tennis player Djokovic, after he was denied entry into Australia.

He had travelled Down Under for the Australian Open after claiming he had been given a medical exemption to bypass Covid rules around vaccination.

But there was an issue with his visa and it soon emerged his team had applied for the wrong document – one which was not compatible with such vaccine exemptions.

So Border Force officials cancelled his visa and told Djokovic that he would be deported.

The Serbian’s lawyers successfully blocked that action from being carried out immediately with an emergency injunction, with his case set to be presented in court on Monday.

Until then, he is being held in the detention centre known as the Park Hotel, which has long been used to house refugees, asylum seekers and others who are denied entry into Australia.

JUST IN: Djokovic given French Open boost amid his Australian Open nightmare

Refugee Choopani admits he has little in common with the 20-time Grand Slam champion who now occupies a room on the floor below the one he has lived in for five months.

But one thing he says he does share with Djokovic is that they have been been “humiliated” by the government.

“I don’t wish detention for nobody, I don’t wish it for any human. No matter what,” he told ITV News.

“The Australian detention system and detention places are the same as hell.

“I feel Djokovic has been a victim of Australian politicians… he has been victim of a political game.”

Choopani also shared some footage of his room, which he says is constantly under guard.

Basic comforts appear to be provided, but the room’s windows cannot be opened meaning there is “no access to fresh air”.

And the food is “disgusting”, as he shared footage of what those who are held at the Park Hotel can expect to be served at mealtimes.

“We’ve been receiving mouldy bread, the food is kind of disgusting and we don’t have access to fresh air,” Choopani added.

“We’re under guard 24/7 and the windows can’t be opened at any stage.

The 24-year-old’s claims of what treatment is like at the detention centre echoes some of what has been claimed by Djokovic’s parents, who have been very vocal ever since their son was first stopped at Melbourne Airport.

His mother Dijana claims her son is being held like a “prisoner” rather than a detainee, and that he has been unable to sleep over the ordeal.

“He was like good. We didn’t speak a lot but we spoke for a few minutes,” Dijana Djokovic told reporters in Serbia. “He was trying to sleep but he couldn’t. As a mother, what can I say?

“If you’re a mother you can just imagine how I feel – I feel terrible since yesterday, last 24 hours.

“They’re keeping him as a prisoner, it’s just not fair, it’s not human.

“The ABF can confirm that Mr Djokovic failed to provide appropriate evidence to meet the entry requirements to Australia, and his visa has been subsequently cancelled.

“Non-citizens who do not hold a valid visa on entry or who have had their visa cancelled will be detained and removed from Australia.

“The ABF can confirm Mr Djokovic had access to his phone.​”