Williams, a six-times champion in New York, struggled with Pironkova's slice forehand early and was at risk of her earliest US Open exit in 14 years until she used her experience to find a way back against a resurgent Pironkova. 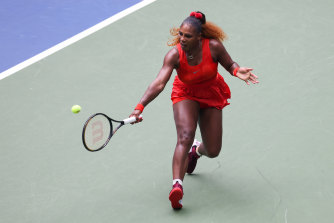 Serena Williams hits a return in her quarter-final against Tsvetana Pironkova. Credit:Getty Images

"I'm happy to be standing here … because at one point I was pretty close to not being here," Williams said during the on-court winner's interview. "I keep fighting and that's one thing that I am super excited about is I never give up."

For Pironkova, who dropped to 0-5 in career head-to-head meetings with Williams, the loss marked the end of a surprise New York run given this was her first professional tournament since Wimbledon in 2017.

Pironkova, back after an absence of more than three years during which she had a baby in early 2018, made a nice start as she consolidated a break to go ahead 4-2 in the first set.

After Williams saved two set points on serve to pull within 4-5, the Bulgarian held her nerve and secured the opener with a backhand crosscourt winner.

In the second, Williams won a 24-point rally to break and open up a 5-3 lead and then, after falling behind 15-30 on her serve, fired three consecutive aces to force a decider.

Williams broke to start the third set in a game during which she even hit a left-handed shot, and never looked back as Pironkova suddenly started to run out of gas.

"Definitely was feeling it in my legs," Williams said of her flat start.

"In the beginning I was a little bit fatigued for whatever reason so obviously I can't do that if I want to keep winning so I am going to try to figure that out."

Williams has been stuck on 23 Grand Slam singles titles, one shy of Margaret Court's record, since winning the 2017 Australian Open.

Up next for the 38-year-old Williams, who has been pushed to three sets in her last three victories, will be either Belgian 16th seed Elise Mertens or former world number one Victoria Azarenka of Belarus.

September 9, 2020 Tennis Comments Off on ‘I never give up’: Serena stays alive in race for grand slam No.24
NFL News