Andy Murray has expressed concern for Novak Djokovic and said the world No.1’s predicament – in hotel detention and awaiting a court case to avoid deportation – is “not good for tennis at all”.

A long-time friend and rival of the Serbian, three-time major winner Murray said he hadn’t personally spoken to Djokovic, but said the Association of Tennis Professionals (ATP) had tried to maintain contact with him. 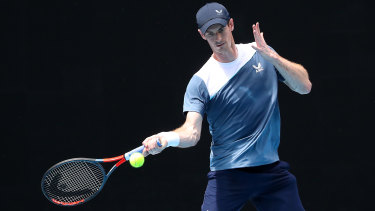 Asked about the sentiment among fellow players amid uncertainty about the nine-time Australian Open champion’s future, Murray said: “I think everyone is shocked by it [the circumstances] to be honest.

“I’m going to say two things on it just now. The first thing is that I hope that Novak is OK. I know him well, and I’ve always had a good relationship with him and I hope that he’s OK.

“The second thing I’ll say on it … it’s really not good for tennis at all, and I don’t think it’s good for anyone involved.

Murray, 34, was among the first people to put the looming vaccine mandate for tennis pros coming to Australia on the agenda, when he said at the US Open that “a lot of the tour is not vaccinated”.

A five-time Australian Open runner-up, Murray is a strong supporter of COVID-19 vaccination, but said he could not comment further on Djokovic’s circumstances. 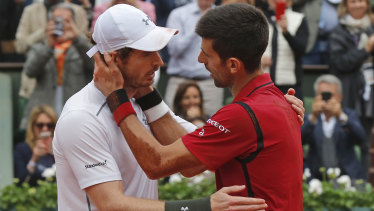 Andy Murray congratulates Novak Djokovic after the Serb won their clash in the 2016 French Open final.Credit:AP

“What I would like to do right now is just wait for all of the facts to come out about what’s happened, because every day something new is coming out and we’re hearing new information all of the time,” Murray said.

“[I need to] wait and hear exactly what the situation is before commenting on it further, because again I don’t think it’s fair because some of it is speculation.

“Some stuff has come out that really doesn’t look good, either. I want to hear all the facts first before giving all of my thoughts on it.”

Murray has famously lost to Djokovic in four of his five Australian Open finals, the first 11 years ago. The pair have a long history and, famously, were born seven days apart in 1987.

Australian Nick Kyrgios also expressed concern for Djokovic’s welfare. “I got vaccinated because of others and for my mums health, but how we are handling Novak’s situation is bad, really bad. Like these memes, headlines, this is one of our great champions but at the end of the day, he is human. Do better,” Kyrgios tweeted on Friday.

Former world No.1 Rafael Nadal, however, made it clear that Djokovic had to deal with the consequences of his choice not to be vaccinated.

Nadal endorsed the importance of science, declaring vaccination was “the only way to stop this pandemic”.

The Spainard has long supported vaccination. “I think if he wanted, he would be playing here in Australia [at the Australian Open] without a problem,” Nadal said on Thursday.

“It’s not for him to say what the right thing to do is, but to listen to the experts on those subjects, and I feel the same,” said Murray.

“A lot of people debate over data and numbers and things like that, but from what I’ve seen currently as well … in the UK, anyway, the people [who] are ending up in the ICUs and in hospital are the people … [who] are unvaccinated.

“And, yes, young healthy athletes are unlikely to be those people, but I guess the best way to protect everyone is for more people to be vaccinated and to protect each other.

“I can accept that young healthy athletes [would think that if] if you contract coronavirus [you] are probably going to be OK.

“But I trust what I’m getting told by the scientists and the doctors.

“It’s not about listening to what politicians or government are telling me to do, it’s more listening to the doctors and the scientists, and the people that really know about that stuff.”

January 9, 2022 Tennis Comments Off on ‘I hope that Novak is OK’: Andy Murray’s concern for friend and rival Novak Djokovic
NFL News