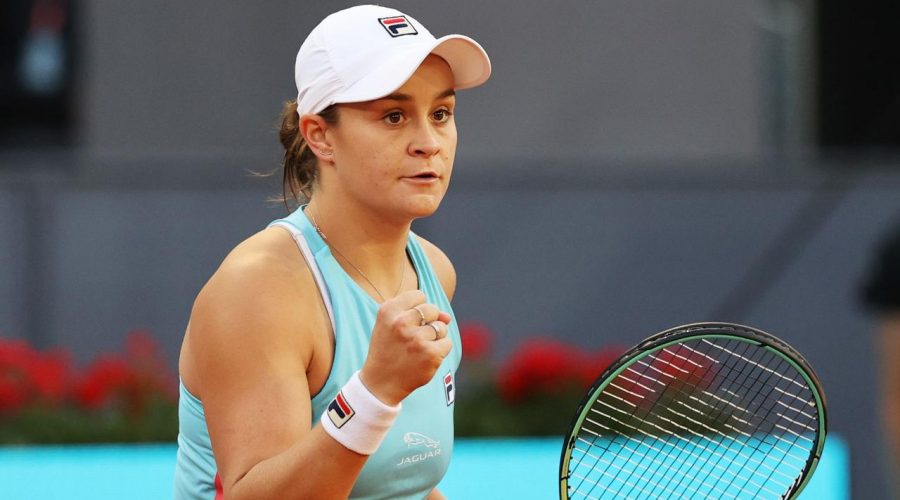 Ash Barty has claimed another major scalp in her stampede through the clay-court season, dispatching the reigning French Open champion in straight sets.

The world No. 1 recovered from losing the first three games against Poland’s Iga Swiatek to post an impressive 7-5, 6-4 triumph in a match-up of the past two Roland-Garros winners.

Barty’s latest victory on the red dirt booked her a quarter-final clash with ninth-seeded Czech Petra Kvitova, who has won five of their nine meetings.

She took out three consecutive top-10 opponents to clinch last week’s Stuttgart title and is on track for another successful tournament.

“I really enjoyed myself out there tonight. I enjoyed the challenge. Iga’s game is exceptional. It’s really, really impressive,” Barty said.

“I loved testing myself and trying to figure out the puzzle tonight and the challenges that she created for me.

Barty didn’t concede serve again after losing an extended second game of the match, and Swiatek was unable to even earn another break point before the Queenslander grabbed the opening set.

She levelled the first set at three-all, then broke Swiatek a second time in the 11th game to take control of the contest.

Barty shot out to a 3-1 second-set lead, and her ability to rally from an 0-40 hole in the sixth game proved crucial in the final result.

“(That was) a massive game in a sense of continuing to build pressure on Iga. I think that was a big part of it,” she said.

“A lot of my service games I felt like I was building pressure on her service games by being able to get out of some tight ones. I think that was a massive game to continue the momentum.”

Barty will try to increase her perfect record against top-20 opponents to 10 matches when she faces three-time Madrid champion Kvitova.

“I love to play Petra. I do. She brings out the best in me … It’s another challenge, another test,” she said.

“She’s won this tournament multiple times, loves the conditions here. A fresh challenge for me.

“We go into it like any other match; try and execute as best we can and whoever does that better on the day will come out on top.”

Alex de Minaur – who advanced to round two on Monday – John Millman and qualifier Alexei Popyrin are Australia’s representatives in the Madrid men’s draw.