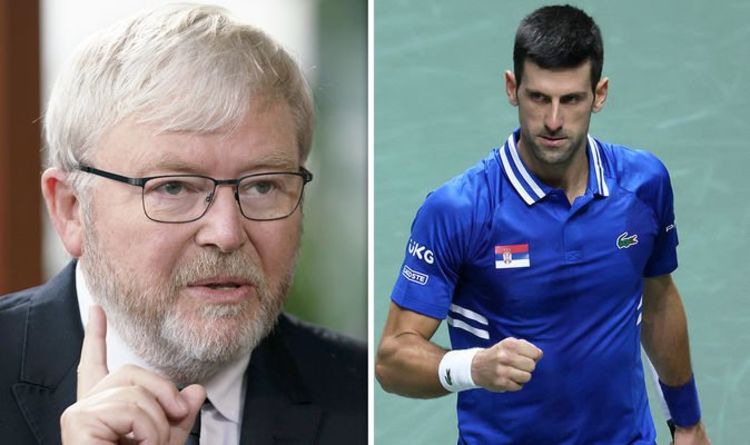 Novak Djokovic is 'fighting a losing cause' says Magee

Former Australia Prime Minister Kevin Rudd has hit out at current PM Scott Morrison, labelling losing the case against Novak Djokovic as “total incompetence”. Djokovic won his appeal to uncancel his visa overnight and has been allowed to leave his quarantine hotel in Australia. The world No 1 had been detained in the hotel for the last few days after having his medical exemption to compete at the Australian Open revoked.

Djokovic has confirmed to officials in Australia he is not vaccinated against COVID-19.

And after arriving in the country last week, the Serbian was told his visa had been cancelled.

Djokvoic had to remain at the hotel until his case was held in court on Monday.

And Judge Anthony Kelly ruled the immediate release of the 34-year-old and ordered the Australian government to pays costs.

But the saga has not gone down well in the eyes of former Prime Minister Rudd.

He tweeted: “Morrison just lost his case against #Djokovic. Total incompetence! Like on everything else. If they seriously didn’t want him, why on earth did they give him a visa to fly here? This was conceived as one giant distraction strategy when out in the real world people can’t get tested.”

His criticism of current Prime Minister Morrison continued, as he later tweeted: “So will the Morrison Brains Trust now cancel #Djokovic’s visa anyway? Despite his incompetence, Morrison would then get to sound like a Howard Mini-Me: ‘We decide who comes to this country. Nobody else’. A distraction from RAT tests, kids’ vaccines & the booster shortage.”

The Australian Open starts in Melbourne in seven days’ time.

No male player has won the tournament more than Djokovic in the open era.

It is the favourite Grand Slam for the world No 1, having been victorious there on nine occasions.

However, there is still a possibility he will not be competing next week.

That is because he could return to court on new grounds.

Australia immigration minister Alex Hawke could take the matter into his own hands.

Hawke could intervene and re-cancel Djokovic’s visa and the Australian government confirmed in court that could be the case.

Djokovic could therefore be banned from entering Australia entirely for three years.