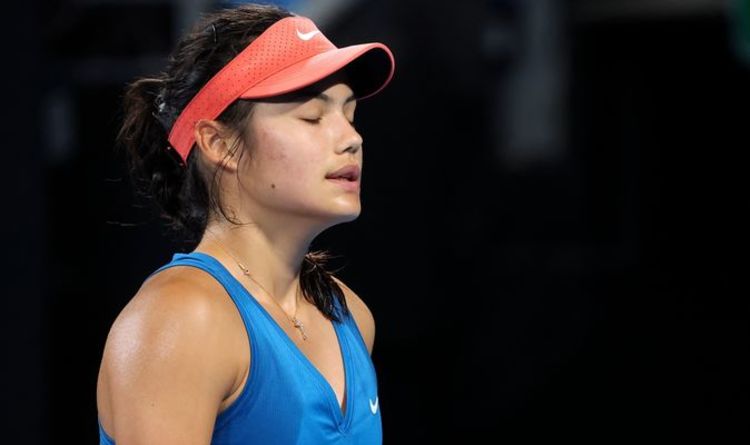 Emma Raducanu suffered a disappointing start to the 2022 season as she won just one game in a one-sided defeat in her first match of the year. The US Open champion faced world No 13 Elena Rybakina in the opening-round of the Sydney International after her original opponent, Iga Swiatek, withdrew. The Kazakh dominated to defeat Raducanu 6-0 6-1 in just 56 minutes.

Raducanu was playing her first match of the season after withdrawing from last week’s Melbourne Summer Set and opting to use the week to practice instead, after having her preparations thrown off after testing positive for Covid in December.

Before stepping onto court, the 19-year-old was thrown a curveball after her original opponent – world No 8 and 2020 French Open champion Iga Swiatek – withdrew and was replaced in her seeded position by world No 13 Elena Rybakina.

The Kazakh came to Sydney off the back of a run to the final at the WTA 500 in Adelaide last week, where she lost to world No 1 Ash Barty in the final.

Rybakina’s momentum seemed to continue in Sydney, as she raced to a 6-0 lead, taking the opening set after just 25 minutes.

JUST IN: Kyrgios “embarrassed to be Australian” after handling of Djokovic saga

Raducanu served three double faults in her opening service game, blowing her 40-15 lead to get broken, and was overpowered by the hard-hitting 22-year-old throughout the set.

A fourth double fault for the Brit gave Rybakina set point, and she took the opener in less than half an hour without dropping a game while Raducanu struggled on her serve.

She continued to struggle in the second, handing Rybakina the break once again with a double fault.

Raducanu finally ended the 22-year-old’s nine-game streak after 41 minutes, getting on the board for the first time much to the delight of the Aussie crowd who cheered her on as she smiled and fist-pumped.

But she was unable to win another game, getting broken once again to allow Rybakina to serve out the match 6-0 6-1 in just 56 minutes.

It leaves the young Bromley local with some things to work on ahead of her Australian Open debut, with the season-opening Major starting in just six days.

The Aussie Open will be the first Grand Slam tournament since the US Open, won by Raducanu when she was a qualifier, and she will now be the woman to beat as the most recent Major champion.

It will be the 19-year-old’s third Grand Slam tournament, and her first with direct-entry, as she will now be the 17th seed compared to her qualifier and wildcard status at the US Open and Wimbledon last year.

Raducanu’s one-sided Sydney loss serves as a reminder of her inexperience on the professional tennis tour, having played just seven tournaments last year.

The Sydney International marked her eighth professional tournament, and the first in her first full year on the tour.

The defeat was also her first match with new coach Torben Beltz in her corner, and ahead of the match she asked chair umpire John Blom where her team would be sitting.

The German previously helped Angelique Kerber win two of her three Grand Slam titles and reach the world No 1 spot in the rankings.