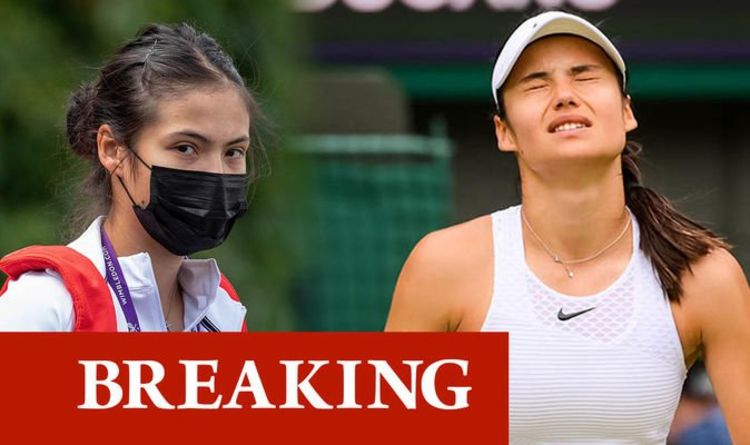 Emma Raducanu will be 'stronger' after loss says Keothavong

Emma Raducanu, 18, retired from her last-16 tennis match at Wimbledon. She today spoke out about her reason behind the move claiming the “whole experience caught up” with her. Her statement in full is detailed below.

The tennis star became a wildcard in this year’s competition after making it further in the competition than expected.

She was forced to retire from her Wimbledon fourth-round match after suffering breathing difficulties bringing her Wimbledon journey to a heartbreaking end.

The teenage athlete was trailing 4-6 0-3 to Ajla Tomlijanovic when she called on her trainer.

Raducanu left the court for medical treatment before announcing she would not be returning.

Wimbledon later confirmed Raducanu retired from the match because of “difficulty breathing”.

The British wildcard tennis star, who was ranked 338th in the world before the tournament, lost a tight first set.

She began to show signs of feeling unwell early in her second set.

Raducanu was seen frequently placing her hand on her stomach and showing signs of breathlessness.

She reached the last 16, making her the last Briton standing in the singles draws.

Anne Keothavong, the former British player and current Billie Jean King Cup captain, was watching two seats away from Raducanu’s mother, Renee, on Court No 1, and saw the 18-year-old after her retirement.

She told the BBC: “Emma’s ok – she’s going to be fine. I saw her leave [Wimbledon] last night and it was a difficult situation for her to be in and for everyone to witness, but she’ll be just fine.”

Keothavong said the sight of Raducanu’s struggles was painful for the teenage tennis star’s family, but insisted neither the scheduling or the athlete’s preparation were to blame.

She added: “Her mum wanted to see her. It’s never easy for anyone to see their child in that much discomfort. But they’re a tight family, good people, and they just want the best for her. I’m sure they will be able to give that to her.

“She purposefully stayed over at Aorangi rather than practising on the main courts to stay out of the public [eye]. It was just unfortunate.

“Had she played earlier in the day, a similar thing may have unfolded.

“It was always going to be a difficult match given the hype and the buzz around it but she will learn from this.

“It was a fantastic Wimbledon debut and next year she will be better prepared and stronger for it.”

In a statement released 18 hours after she abandoned her match against Australian Alja Tomljanovic after 75 minutes’ play, the 18-year-old tennis player has spoken about the issues which prompted her to retire.

Raducanu wrote: “I wanted to let everyone know that I am feeling much better this morning,” the 18-year-old wrote.

“First up, I want to congratulate Ajla on an incredible performance and I’m sorry our match ended the way it did. I was playing the best tennis of my life in front of an amazing crowd this week and I think the whole experience caught up with me.

“At the end of the first set, after some super intense rallies, I started to breathe heavily and felt dizzy. The medical team advised me not to continue and although it felt like the hardest thing in the world not to be able to finish my Wimbledon on the court, I was not well enough to carry on.

“I want to thank the people who have cheered me on every single match, I wanted to win so badly for you! I also want to thank the All England Club, my team, the LTA, my parents and friends. Last night will go a long way to helping me learn what it takes to perform at the top.

“I will cherish everything we have achieved together this week and come back stronger! Can’t wait to see what’s next on my journey.”

Britons were quick to praise Raducanu’s statement on social media, applauding her spectacular performance in the tournament.

One social media tweeted: “You did everyone proud Emma… You will learn so much from this experience, you have a very bright future”.

Another added: “Don’t worry. You’ll win it one day.”

Jo Malone wrote: “So glad your feeling better today, I remember having to step down once from an event due to anxiety, feeling very dizzy and I couldn’t find my balance, you played so well I know we will see u play many many more times in the future rest and remember your dreams are still yours”

Another Twitter user commented: “I am now a life-long fan after seeing some of the best tennis shots I have ever seen. The way you return a cross-court ball with accuracy and doggedly chase every ball was incredible. I have no doubt you will get an even bigger roar on Centre Court in 2022. Get well soon”.

One person added: “Just the beginning Emma! You’re 18! Keep working hard and you have a seriously bright 10-20 years ahead of you! Future grand slam champion without a doubt! Best of luck Emma!”

Another wrote: “If this is just the start, then you’re going to have one hell of a career. You gave British tennis fans a huge smile with how you played and composed yourself off-court. What happened yesterday was part of the learning curve. You’ll be stronger for it. Here’s to a lot more highs.”

One Twitter user said: “You are a gem; an absolute delight to watch on the court. I’m so glad you’re feeling better. Dizzy spells are not to be taken lightly. Take care of yourself and congratulations on an incredible debut at Wimbledon. You have lots to be proud of! Can’t wait to see you on the hard courts.”

Another social media user commented: “What an absolute class act! You were absolutely amazing and it didn’t surprise me as I know all of the hard work you do to get to this level. This is just the beginning, you are a breath of fresh air to the sport and in my opinion, you will get to the very top. We’re with you!”