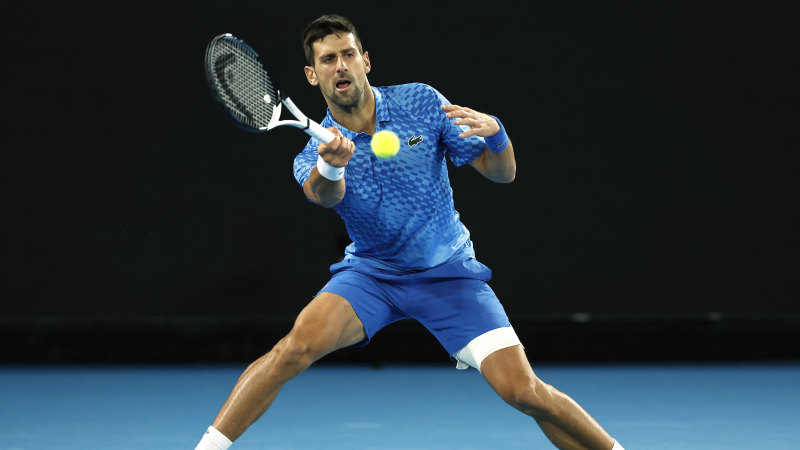 A lamed Novak Djkovic escaped with a four-set win over a player barely ranked inside the world’s top 200 on Thursday night, but with such a question mark hanging over a brittle hamstring that there has to be a doubt about him surviving the highly credentialed heavyweights he would need to conquer to win the Australian Open for the 10th time. 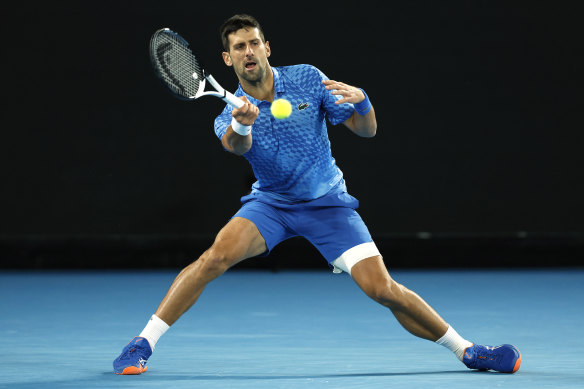 Put those words in the fridge to eat on Sunday week accompanied by the winner’s champagne.

The first of his next-level opponents on Saturday will be Bulgarian Grigor Dimitrov, once regarded as the next big thing and still quite a sizeable figure. Of course, the cohort of heavy hitters has been considerably thinned in what has become a star-crossed tournament. The world No.1 is not here at all, and the top two seeds are both out, as well as two others in the top 12. This is only the second round, remember.

For a fleeting moment on Thursday evening, it appeared that fourth-seeded Djokovic, who is nearly invincible on these courts, would join them on an early flight out. Midway through the second set against No.191 ranked French chancer Enzo Couacaud, Djokovic’s left hamstring began to give him grief, necessitating a long injury time-out and off-court treatment. He lost the set in a tie-break and momentarily it was not clear that he could complete the match.

On-court interviewer Josh Eagle did not ask Djokovic about his hamstring post-match, which seemed to baffle even Djokovic. Fans were left only with his somewhat downbeat and world-weary summation: “Well, yeah, let’s keep it going.”

He did eventually close out the match with the authority you might expect. But for stretches, Couacaud played him as a near equal and peer. With due respect to Couacaud – and the crowd gave him plenty for his courage and audacity – this was more instructive about Djokovic than him.

In fact, they were from different tennis castes. The way to define it sounds like an old joke. When asked how he might beat Djokovic, Couacaud said his coach once coached a player who played Djokovic once. As if he was not already handicapped enough, Couacaud turned an ankle early in the match and needed a time-out of his own, though he appeared to play without restriction afterwards.

“There was a lot happening in tonight’s match,” Djokovic said by way of later understatement.

In the fourth set, Djokovic approached umpire Fergus Murphy to try to have evicted a fan he said had been drunk and provocative throughout the match. “Kick them out,” chanted the crowd. If there was any doubt about the public’s sympathy for everyone’s favourite villain, there was none now. In the end, Dokovic had his way. He usually does.

Djokovic played through and won with hamstring soreness in lead-up events in Adelaide, but was vague and equivocal about his fitness before this tournament. In his first-round win over Spaniard Roberto Carballes Baena, he finished points with uncharacteristic rush, which made for emphatic looking scoreline, but prompted canny judges to wonder if it was to the end of minimising the toll on his hamstring.

This night, which was colder, he was conservative from the start, which allowed the unheralded Couacaud to play his way into the contest. Doubtlessly Djokovic had hoped that his vast advantage in class and experience would pull him through and so it did.

But in the second set and into the third, it was clear that he was still favouring the dicky hamstring. Sometimes, he moved as if leg-roped. After nearly every point, Djokovic winced and hobbled. At changes of end, he stretched and flexed using courtside furniture like an amateur fun runner. It was macabrely intriguing.

In time, the bandaging and painkillers did their job, and Djokovic found his range and rediscovered his strut, and he cruised to the victory. 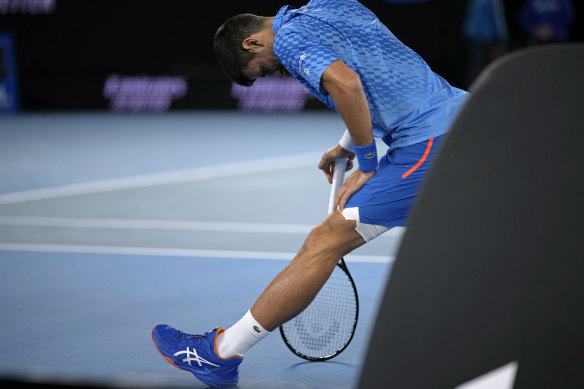 Novak Djokovic stretches his leg during a break.Credit:AP

This was the least anyone expected of him when he met with Couacaud who at 27 only ever had two matches on the ATP tour, one in the first round here, and who had made it through qualifying here for the first time after six attempts. His biggest career achievement was to make and lose the final of a Bendigo challenger some years ago.

How he would like to play with two legs as Djokovic can on one-and-a -half.