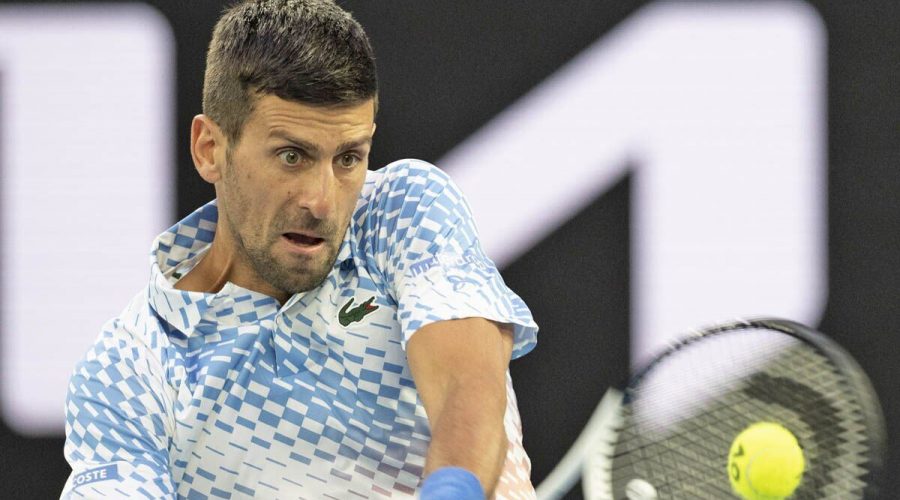 During his Australian Open victory over Enzo Couacaud on Thursday, Novak Djokovic was heckled. And he responded to the fans in question by saying they were ‘drunk out of their mind’, in scenes reminiscent of the Wimbledon final when Nick Kyrgios faced the Serb. The former world No 1 was able to battle his way to victory regardless, however, and will be hoping to go all the way Down Under.

But his mood was worsened during the showdown by some fans dressed up in ‘Where’s Wally’ attire, complete with red and white stripy t-shirts.

The group seemed to be in a raucous mood at the Rod Laver Arena and Djokovic switched as they continued to make a noise in the fourth and final set.

Approaching umpire Fergus Murphy, he said: “The guy’s drunk out of his mind. From the first point he’s been provoking. He just wants to get in my head.

“So I’m asking you, what are you going to do about it?

“You heard him at least ten times, I heard him 50 times. What are you going to do?

“Why don’t you get security to get him out of the stadium?”

Djokovic appeared to have the backing of fans inside the stadium, with supporters chanting his name as he made his complaints.

And the 35-year-old would proceed to get his way, with security escorting the men out of the ground.

The Australian made allegations against fan Anaia Palus, accusing her of having ‘700 drinks’ on a hot day in the capital.

He also fumed at the umpire by saying: “She’s distracting me when I’m serving in a Wimbledon final.

“There’s no other bigger occasion, you didn’t believe me and then she did it again. It nearly cost me the game.

“Why is she still here? She’s drunk out of her mind and speaking to me in the middle of a game. What’s acceptable?”

Palus then hit back afterwards, however, insisting she was only sending nice words in Kyrgios’ direction.

“I wanted to show we were for him, I wanted to encourage him,” she said.

“I wanted to give him support. Maybe I took it too far… but I only had good intentions.

“It’s the temperature for me, I had no hat. I’m really sorry.”

And Kyrgios would go on to apologise, settling his case with Palus and later releasing a statement that read: “I told the umpire that a fan, who I now know to be Anna Palus, was distracting me during the match, believing that she was drunk.

“I accept that belief was mistaken, and I apologise.

“To make amends, I have donated £20,000 to the Great Ormond Street Hospital Charity, a charity chosen by Ms. Palus. I will not be commenting on this matter again.”

Sometimes, the heat of the moment gets to athletes and fans alike.

And Djokovic paid tribute to Couacaud after his Australian Open victory, saying: “I wanted to get through in three (sets) but credit to him for playing some really good tennis towards the end of the second.

“Yeah, some really interesting circumstances that you have to deal with but I guess that’s a Grand Slam, night sessions can be electric in both a positive and negative way for a player on the court.

“You just have to accept it and get the most out of it.”

When quizzed about his hamstring, which seemed to be causing him problems, he added: “To be honest, it’s not good at all.

“But look, I’ll take it day to day. It was better last match than tonight, that’s all I can say.

“It’s up to God to help me and the physio and everyone. Let’s take it day by day.”

January 19, 2023 Tennis Comments Off on Djokovic has just had his Kyrgios moment at the Australian Open
NFL News