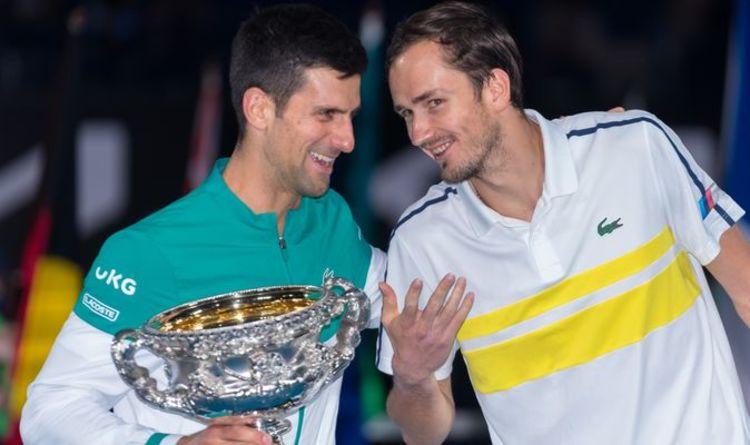 US Open: Daniil Medvedev tells crowd he won because of them

Daniil Medvedev has admitted he’s following the example of Novak Djokovic as he tries to forget his straight-sets quarter-final defeat at the Tokyo Olympics. The Russian was a favourite to reach the gold medal match but crashed out to Pablo Carreno Busta 6-2 7-6 (5). He’s now competing in the Toronto Masters and upcoming Cincinnati Open as the top seed and aiming to put his heartbreaking Olympics defeat behind him in a bid to pick up more titles during the North American hard court swing.

Medvedev had already caused controversy at the Olympics as he told officials he “could die” in the sweltering heat and humidity during his win over Fabio Fognini.

He was tipped to be the man to stop Djokovic’s attempt at the Golden Slam but both players suffered defeat ahead of the final and were unable to take home any hardware in the men’s singles.

The Russian now comes into the North American hard court season with an impressive resume from the last full run in 2019, having won Cincinnati and reaching the finals at the Canada Masters and the US Open.

Now in Toronto, where he is the top seed, the world No 2 has admitted that his Olympic result was disappointing but says he’s managed to get over it by following the advice of 20-time Grand Slam champion Djokovic.

“Yeah, definitely Olympics was a tough shot, I would say, to be completely honest,” the two-time Major finalist told reporters.

He continued: “When Novak lost, I saw all over social media what he said and he said, especially when he lost after the third place, he said that all his Olympics defeats were very tough, but then he came back only stronger and he knew that that would make him stronger.

“I was, like, I was really disappointed with the way Olympics ended for me. Obviously if the guy who is probably the greatest tennis player of all time, 20 slams, 37 Masters or whatever, says this, well, I have to, you know, kind of follow what he does, and I knew that I will be coming here, trying to disconnect a little bit, went to Orlando, no really strict rules there before coming here. Tried to disconnect from, yeah, from the loss, and now in a way I don’t remember it.”

Now, the Russian has been able to find perspective as he accepts he can’t win every tournament and sets his sights on the matches ahead in North America.

“That’s how tennis is. You’re going to have 20 tournaments in a year. You can win what, maybe five, six, seven if you have the best year of your life. So you’re not going to win every tournament. You just need to show your best and play your best.”

Second-ranked Medvedev is the top seed this week and next, with world No 1 Djokovic absent from the Masters 1000 events as well as Rafael Nadal and Roger Federer.

Despite now being the man to beat in Toronto and Cincinnati, the 25-year-old says he’s not feeling any extra weight on his shoulders.

Responding to a question on whether he was feeling more pressure, he said: “No, not at all, to be honest. When I just came on the tour, when you play your first Grand Slam or, I don’t know, first quarterfinal of a slam, first Masters final, you feel tight. It’s not an easy feeling, but sometimes it actually helps you to play good.

“I don’t have it anymore. I know how to win Masters. Okay, just need to play good. Need to fight, need to run well, hit some big forehands or whatever.”

Medvedev found himself in the same situation at the Miami Masters earlier this year, with all of the big three absent from the draw there, but was unable to seize his opportunity and lost in the quarter-final.

He added: “I have zero pressure being the No 1 seed. I actually feel it’s an honour, I would say, because means that you’re high in the rankings, playing great tennis, have a lot of points. So, yeah, it’s an honour for me to be No 1 seed in Masters for the second time, but no pressure at all.”
Source: Read Full Article

August 12, 2021 Tennis Comments Off on Daniil Medvedev copying Novak Djokovic as Russian vows to bounce back ahead of US Open
NFL News