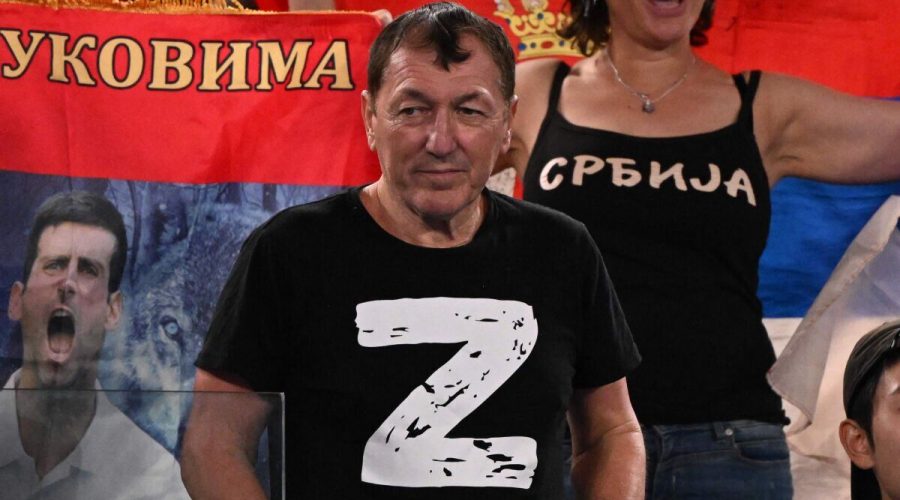 Novak Djokovic jokes about his age at the Australian Open

Victoria police have been drafted in to question Australian Open spectators who unveiled symbols in support of Russia and president Vladimir Putin during this week’s tennis action. One supporter was seen sporting a t-shirt with ‘Z’ on the front, while others gathered and chanted outside Rod Laver Arena.

Aussie Open chiefs were forced into a tricky position when a Russian flag was brought to the match between Kamila Rakhimova and Ukrainian star Kateryna Baindl earlier in the tournament.

At the time, Vasyl Myroshnychenko, head of Embassy of Ukraine in Australia, Tweeted: “I strongly condemn the public display of the Russian flag during the game of the Ukrainian tennis player Kateryna Baindl at the Australian Open today. I call on Tennis Australia to immediately enforce its ‘neutral flag’ policy.”

That prompted a tightening of restrictions as tournament organisers moved to ban all Russian and Belarusian flags within the grounds of Melbourne Park, with signs reading: “Our initial policy was that fans could bring them in but could not use them to cause disruption.

“Yesterday we had an incident where a flag was placed courtside. The ban will be effective immediately. We will continue to work with the players and our fans to ensure that this is the best possible environment to enjoy the tennis.”

Things kicked up a notch on Wednesday as a group of supporters unveiled more Russian flags, as well as t-shirts in support of Putin’s Ukrainian invasion, which has killed thousands and displaced multiple millions. One fan removed a t-shirt to reveal another one underneath sporting a ‘Z’, which has become known as a pro-war symbol in Russia.

“Our initial policy was that fans could bring them in but could not use them to cause disruption. Yesterday we had an incident where a flag was placed courtside. The ban will be effective immediately. We will continue to work with the players and our fans to ensure that this is the best possible environment to enjoy the tennis,”

Russian forces often use the letter ‘Z’ as an identifying symbol on their vehicles in Ukraine, allowing soldiers to distinguish themselves from other forces, and it has since been used as an intimidation tactic against those who oppose the war. Security were caught on camera speaking to the supporter, although he was seemingly allowed to stay in his seat until Djokovic’s three-set win was sealed over Moscow-born Rublev.

Footage shot from outside Rod Laver Arena showed a group of fans celebrating with Russian flags on show, along with people wearing ‘Z’ t-shirts and pro-Putin displays. Multiple Aussie Open spectators have since been questioned by Victoria Police after allegedly threatening security guards following the quarter-final between Rublev and Djokovic.

“Four people in the crowd leaving the stadium revealed inappropriate flags and symbols and threatened security guards,” read a brief statement released by Tennis Australia. “Victoria Police intervened and are continuing to question them. The comfort and safety of everyone is our priority and we work closely with security and authorities.”

The women’s side of the draw is heating up with two Belarusian competitors, Victoria Azarenka and Aryna Sabalenka, who are both competing under a neutral flag, seemingly on a collision course to meet in the final. Azarenka faces Russian-born Elena Rybakina in Thursday’s semi, while Sabalenka will come up against Poland’s Magda Linette.