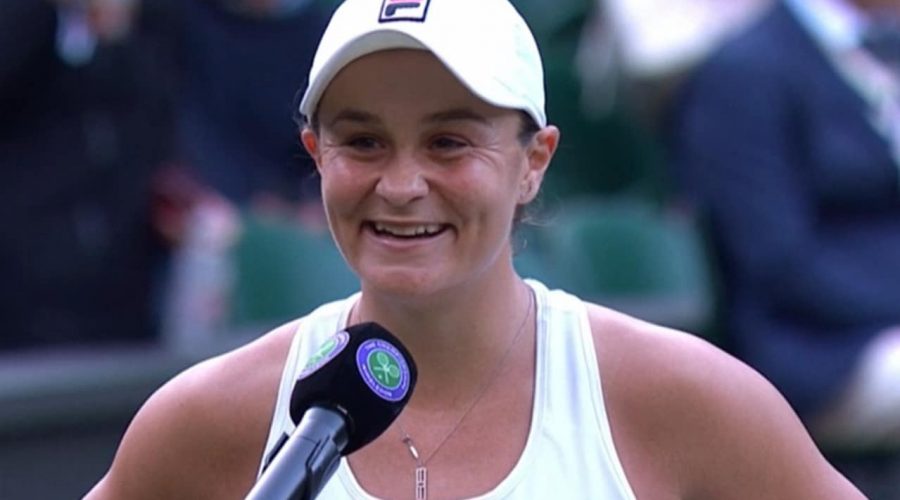 Ash Barty set up a clash of French Open winners in the Last 16 of Wimbledon after the world No. 1 beat Katerina Siniakova of the Czech Republic 6-3 7-5 on Sunday morning (AEST).

The 25-year-od Australian won the 2019 French Open and meets the reigning champion of Paris, Barbora Krejcikova of the Czech Republic, for a place in the last eight.

“It was a hell of a match right from the first point. Katerina brought an incredible level and it was a lot of fun playing out here,” Barty said.

“I knew that I had to play very near my best to be able to compete with her today, so (I’m) happy to be able to play some good stuff.

“Another great challenge (Krejcikova) but looking forward to it.

“She has been playing some great stuff and it will be a new challenge for me as I have never played her before.

“I’m very privileged to be in the second week of Wimbledon again. This is genuinely one of my favourite weeks of the year, so to be able to be prolonging my stay is a lot of fun.”

Barty — who has never been beyond the Last 16 at Wimbledon — is bidding to win her first Wimbledon singles title on the 50th anniversary of fellow Indigenous Australian Evonne Goolagong Cawley’s maiden crown.

But she’s not feeling any pressure, judging by her light-hearted display in her post-match, on-court interview.

English sports fans are dividing their time between Wimbledon and the Euro 2020 tournament, as they will their football side to win a first international trophy since the 1966 World Cup.

The Three Lions beat Germany in a historic result earlier in the week and kicked off their quarter-final against Ukraine shortly after Barty’s match had wrapped up on Centre Court.

Asked how it feels to have so many Australian fans in the stands cheering for her, Barty delivered the perfect sledge.

“Better than the English telling me the football’s on!” she said, as the crowd roared with laughter.

The official account for The Tennis Podcast tweeted: “Only Ash Barty could tell a crowd in England that football is boring & still get cheered.”

Barty only needed 97 minutes to power into the round of 16, recording 26 winners in a near-faultless display. Thankfully, there were no signs of the bizarre serving woes that plagued Barty in her second round win over Anna Blinkova.