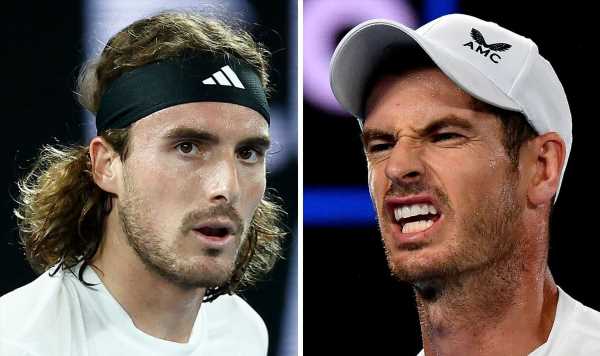 Stefanos Tsitsipas has insisted that he was left stunned when he saw that Andy Murray was still hanging around at the Australian Open on Friday morning after his thrilling second-round comeback victory over Thanasi Kokkinakis that lasted for a total of five hours and 45 minutes. Murray rolled back the years to book his place in round three with a determined performance that saw him fight back from two sets down to snatch victory from the jaws of defeat in remarkable fashion.

The match started late on Thursday evening and did not finish until around 4am local time in Melbourne, which was just six hours before the start of Friday’s third-round action at 10am. It seems as though Murray was in no rush to go back to his hotel room for some much-needed rest, though, with Tsitsipas running into the Scot before his straight-sets win over Tallon Griekspoor.

“It’s no fun for Andy,” said Tsitsipas. “I saw him today before my match. I was thinking to myself, what is he doing here? He should be in bed! That’s the nature of it, you have to deal with it.

“What can you do? It started as a reasonable time, I would say. There’s a rule in place. They didn’t break any rule. The match started at 10pm. Kokkinakis made it long. Murray made it long, too.

“I think tennis likes these kind of matches because there’s a story behind, there’s a great story behind this match, and it’s going to be remembered. I do remember very vividly, very well the match that Baghdatis played with Hewitt. It’s somewhere back inside my mind somewhere. I do remember this moment.

“It is definitely a very magical moment, for sure not for the one who loses because it’s painful. On one side it’s painful, on the other way it’s pretty good because you don’t have to deal with jet lag coming back to Europe, which helps.”

Murray, meanwhile, was left delighted with his awe-inspiring win over Kokkinakis but slammed Australian Open organisers in his post-match interview by insisting that early-morning finishes are not beneficial for anybody involved in the sport.

“I don’t know who it’s [the late finish] beneficial for,” said Murray. “We come here after the match and that’s what the discussion is, rather than it being like, ‘epic Murray-Kokkinakis match’. It ends in a bit of a farce.

“Amazingly people stayed until the end, and I really appreciate people doing that and creating an atmosphere for us. Some people obviously need to work the following day and everything. If my child was a ball kid for a tournament and they’re coming home at five in the morning, as a parent, I’m snapping at that.