The first Australian to reach the men's last eight at Flushing Meadows since John Millman in 2018, the 21st seed now awaits the winner of second-seeded Austrian Dominic Thiem and Canadian Felix Auger-Aliassime. 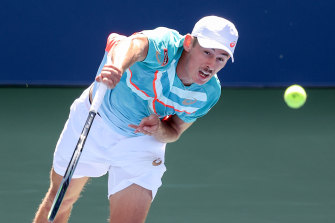 Alex de Minaur, pictured, will play either Dominic Thiem or Felix Auger-Aliassime in the quarter-final.Credit:Getty Images

When the US Open started, neither promising 21-year-old De Minaur nor 30-year-old Pospisil, who grabbed more attention in recent weeks as Novak Djokovic's sidekick in starting a new players' association, would have been tipped as a major winner.

But with Djokovic disqualified on Sunday after striking a line judge in the throat with a ball, Roger Federer and Rafa Nadal not at Flushing Meadows and Andy Murray suffering an early exit, the chances of de Minaur winning the title have grown.

With the stakes a little higher, the opening set unfolded like the first round of a prize fight with both players probing for openings and neither managing a single break chance.

In the tiebreak it was Pospisil who had looked poised to land the first blow by going up 6-2, but De Minaur sweept the next six points to grab a 1-0 lead.

"That first set was crucial," said De Minaur. "I think it was just a couple of things going his way and then my way.

"I went down 6-2 but I don't think I played a bad tiebreak, I was just unlucky here and there.

"I just tried to stay calm, do my thing."

After that effort the 94th ranked Canadian could only muster token resistance, with De Minaur securing an early break in the second and third sets and never allowing Pospisil a chance to get back into the match.