In a darkened room at the Hilton Hotel near Wembley, a couple of hours before the biggest game of their lives, Wycombe Wanderers held a team meeting. The manager, Gareth Ainsworth, pulled up the projector and played a series of video messages to his team: some were personal, from proud family and friends; some were funny, like the celebrities roped in by Adebayo Akinfenwa to wish them luck. Some brought a cheer, like popular former teammate Jason McCarthy whom Wycombe sold to Millwall the previous summer to stave off financial catastrophe. Others were more moving, like the message from the daughter of a lifelong Wycombe fan who died of a heart attack in January, whose funeral Ainsworth attended. “Dad would have been so proud to see Wycombe at Wembley,” she said. “I’m starting to see why he was so devoted.”

Next Ainsworth gave a stirring teamtalk, and told his players to close their eyes. “He asked us to visualise everything about the final ahead,” says long-time club captain Matt Bloomfield. “At the end he told us to picture me, ‘Mr Wycombe’ who’s been at the club for 16 and a half years, standing in Wembley lifting the trophy, and to picture how much that would mean to me. I had hairs stand up on the back of my neck, I was emotional, I had to get out of the room. It was such an emotionally charged room, we were ready to go out and play the game right there and then.”

The meeting left a lasting impression on everyone in the room and helped inspire victory over Oxford United, and so on Saturday Wycombe Wanderers will play in the second tier of English football for the first time in their 133-year history. They will play clubs who have won Premier Leagues and European Cups, clubs like Sheffield Wednesday and Middlesbrough who could fit the capacity of Adams Park inside their stadium four times over.

It has been some journey, one that cannot be told without the rock-n’-roll-loving Ainsworth at its centre – one staff member describes him as the “heartbeat” of the club, as if his energy and enthusiasm is plugged into the walls. His eight years in charge make him the longest serving manager in English football, a journey that began on the floor of League Two, clinching Football League survival on the final day in 2014, suffering Wembley penalty heartbreak in 2015, finally reaching League One in 2018 and somehow rising into the Championship, upturning all footballing logic as he went.

At 36, Bloomfield has been there through it all. “I can’t really overstate the job he’s done,” the captain says of his manager. “His drive to get the very best out of every player is just incredible. We were all at a point in our careers where League One was as high as we’d played, and staying up the season before was a great achievement, so to drive this group of players to promotion is nothing short of miraculous.”

Yet most extraordinary of all is that a year ago they were the favourites to be relegated to League Two, not only because they’d struggled the previous year but because they were penniless and without enough players to even make a team. Wycombe’s entire existence appeared fragile, and their season looked doomed.

At the start of 2019-20 preseason and what would go on to be the greatest single campaign in Wycombe’s history, the club had only nine contracted players. In fact it was barely a ‘club’ at all: they had no reserve team, no academy, and the lease for the ground was expiring. A couple of proposed takeover bids had collapsed, and the fans’ trust which owned Wycombe was leaking money. It had lost £700,000 in 2018-19, and so the spine of Ainsworth’s team which had got them up and kept them up was being sold and the already minuscule wage budget was being slashed by 30%. Ainsworth called in non-league triallists in to fill the gaps, but it was clear they were on the brink. Bloomfield describes playing in League One as living in “a pie-in-the-sky dream”, a dream that appeared to be almost over. Every predicted table around had Wycombe going down. 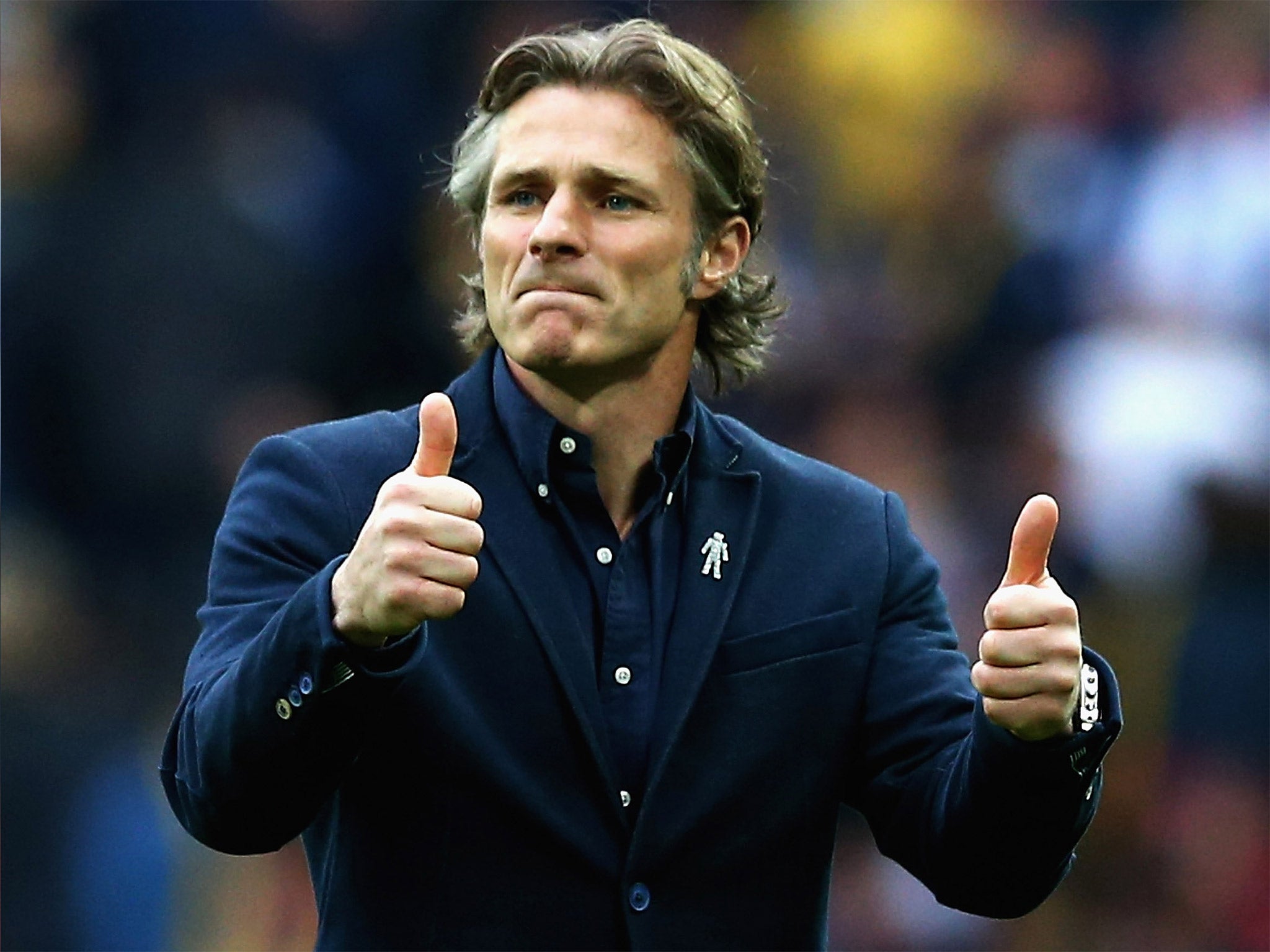 But just when they needed a lifeline, they found one. American lawyer and businessman Rob Couhig had been considering buying Yeovil Town but when they were relegated from the Football League he turned his attention to Wycombe, who had the appeal of stability in the football aspect of the club under Ainsworth. He began a try-before-you-buy arrangement, injecting some cash with a playing staff budget of £2m for the year – still not much in League One terms when Sunderland were paying Will Grigg half a million – but no longer so far behind. “Promotion was nowhere near our radar,” says Bloomfield, but at least Couhig had picked them up off the floor and given them a chance to compete.

Now Ainsworth needed some players. With assistant Richard Dobson they began a careful recruitment process, bringing in 11 on loan or by free transfer including key players like Jack Grimmer from Coventry and David Wheeler from QPR. Ainsworth was meticulous in the way he selected new additions. “It is the person before the player,” explains Bloomfield. “We’ve worked so hard to create an inclusive culture, and that is what we guard above all else. You have to be a certain type of person to get in the door at Wycombe Wanderers. If you get in the door, well done, because they’ve done their due diligence, umpteen phone calls and done their background checks. If there’s any slice of doubt, they won’t sign a player. At the same time, they’re not able to offer the wages that other clubs are able to offer so often they are a hungry player who’s doing it for the right reasons.”

Like Ainsworth, Couhig has an imposing personality and wasn’t afraid to lay down the law over finances when he felt the need. Later in the season when the manager wanted to bring back the popular McCarthy on loan for the play-offs, Millwall demanded such a large portion of his wages that Couhig blocked the deal. But with some frugal shopping, Ainsworth began to assemble a collection of misfits from around the Football League with a hunger for success.

Unlike the fans’ trust before him, Couhig wasn’t a regular supporter so he could make some pretty unpopular business decisions, and take the flack that came with it. There were grumblings when he raised ticket prices, but that soon dissipated when he transformed the matchday experience. Leaning on his American influences and baseball in particular, hotdogs and craft beer became staples as the club turned to local suppliers for produce, including chef Tom Kerridge for an upgrade in pies. New toilets and electric billboards brought Adams Park into the 21st century. There was live music too, and in amongst it all was often Couhig himself, swigging ale with fans and talking openly.

On the pitch, Ainsworth’s new team were beginning to click. The sun seemed to shine on every matchday in those opening weeks as the end of a golden summer faded into autumn, and goals flowed like the local beer to evoke a carnival atmosphere. They beat Bolton 2-0, scored a last-minute winner to beat Southend 4-3 and did the same to MK Dons. Big clubs like Sunderland and Portsmouth came and lost, and as each one departed, the belief grew.

Wycombe were seven points clear of the rest as Christmas neared, before a downturn and then lockdown, forcing a points-per-game calculation which placed Wycombe third and into the play-offs. Couhig had only sealed his 75% stake in the club weeks earlier, and the American businessman would have been forgiven for thinking this was something of a financial misstep. “I’ll be forever grateful to him for giving us the opportunity,” says Bloomfield.

One staff member tells a story of former Wycombe manager Paul Lambert and how he barely knew the names of anyone around the club during his brief spell at Adams Park. He rarely visited the club’s office and wasn’t often spotted at training either, preferring to spend the first few days of the week back in Scotland before flying down ahead of the weekend’s match.

By contrast, Ainsworth lives and breathes the football club. He turns on the sprinklers in the morning and switches off the lights at night. He knows the name of every staff member from top to bottom, and their husbands and wives too. He buys gifts when they have a baby and phones their family when they go through bereavement. He has a close-knit group of “generals”, four senior players who keep the squad in check – Bloomfield, Akinfenwa, Joe Jacobson and Darius Charles – and often on a Sunday he will walk his dog and give them a call to check in. 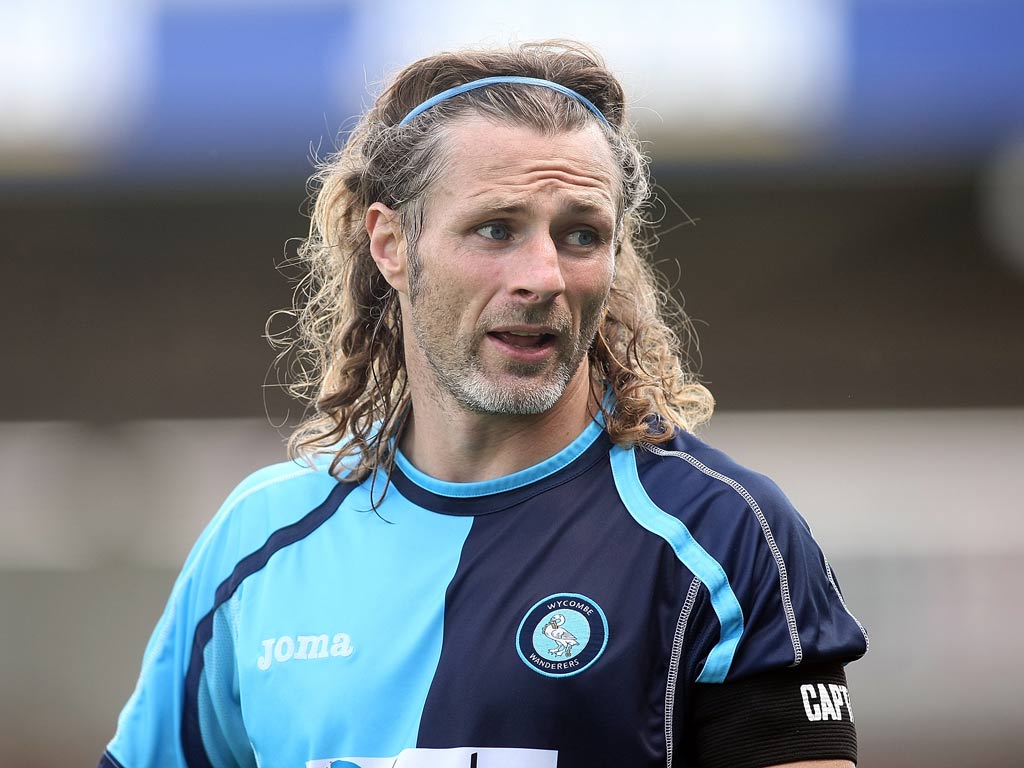 In a former life, Ainsworth and Bloomfield were Wycombe teammates. “He was always a happy, positive man who could see the best in every situation,” says Bloomfield. “He was that kind of guy who was energising those around him, always playing music, and he’s taken those qualities into management. He will always have a positive outlook on any situation, and that’s not always easy to do in football.”

Ainsworth is in a band when he’s not coaching and his touchline style is certainly more rockstar than manager, more Justin Hawkins than Jose Mourinho, but while it could be considered a little Brent-esque to turn out in a leather jacket and red snakeskin boots (you can still find them), he manages to pull it off with a sense of authenticity. Ainsworth has talked about the importance of being entirely himself in order to set a culture of openness at the club, to encourage the players to be comfortable in their own skin.

Above all it is his ability to motivate, to inspire and instil a feeling of impenetrable togetherness and confidence in his players, which has lifted Wycombe to new, dizzier heights. “He has a real knack of making you believe in what he’s telling you,” says Bloomfield. “So for instance before the playoff games, he got to the point where it felt like no matter who we were playing, he convinced us we were going out there to win a game, that the group of subs and players on the bench were behind us and we were one as a squad. And then he took us on the journey and by the time he finished his meeting, there was nothing and no one that was going to stand in our way. We were going out there to win.”

One of Ainsworth’s tricks in the play-off final was to get the Wycombe bench participating like a crowd, cheering from the touchline to the bemusement of their Oxford counter-parts on the opposite side. Every little detail fed into the game as Wycombe rode their luck in the final but got over the line. Ainsworth insists those players who earned promotion now deserve the chance to test themselves in the second tier this season.

Symbolic of their return to strength was the re-signing of Jason McCarthy this summer. He had appeared in that video before the play-off final after being sold when it all looked so bleak. After so many years just trying to stay afloat, and barely 12 months on from the edge of disaster, Wycombe Wanderers are about to begin life in the Championship.