It took 133 years to get to the second tier of English football, so despite kicking off life in the Championship with a defeat, everyone at Wycombe Wanderers is looking at the bigger picture.

“We don’t want to just make up the numbers, we want to make a good account of ourselves,” Wycombe winger David Wheeler said after a 1-0 defeat to Rotherham United.

“We didn’t defend the corner well enough. We’ve got to learn quickly [at this level], maybe quicker than we did last season.”

Some might have thought the footballing gods had smiled on Wycombe by handing them a fellow promoted side for their first ever game in the second tier of English football, especially considering Gareth Ainsworth’s side hadn’t lost to Rotherham in nine appearances since 2001, when Ainsworth himself was a 28-year-old winger at Wimbledon, but the Championship is famously an unforgiving league.

Michael Ihiekwe’s 92nd-minute bullet header was Wycombe’s first lapse in concentration at the back in a game where they had also hit the bar and had a chance cleared off the line. But there are 45 more matches to go and plenty of points to be won during a historic season for the Buckinghamshire club.

Last season Wycombe were most pundits’ and bookmakers’ tips to get relegated from League One, but in a fairytale run they made the play-offs and beat favourites Oxford in the final at an empty Wembley. Wycombe have only been a league team since 1993, having spent nearly 100 of those 133 years in existence as a non-league club. Indeed, the manager that led them into the Football League, Martin O’Neill, was in attendance for the Rotherham game.

It would have been a party atmosphere at Adams Park were it not for the continuing Covid-19 restrictions, with Wycombe fans urged to stay away, most watching an official feed at home. In pub garden weather, with a stream of navy and pale blue flags decked all over the lone terrace stand – which would have been packed with home fans – the mood among everyone Wycombe-related seemed nervous but hopeful.

“It means everything to be here,” broadcaster and Wycombe fan Alan Parry, one of a handful of fans who had managed to sneak in, told The Independent. Originally from Liverpool, Parry fell in love with the Chairboys in 1975 when he covered an FA Cup tie against Middlesbrough and later served as a club director as well as Head of Media. 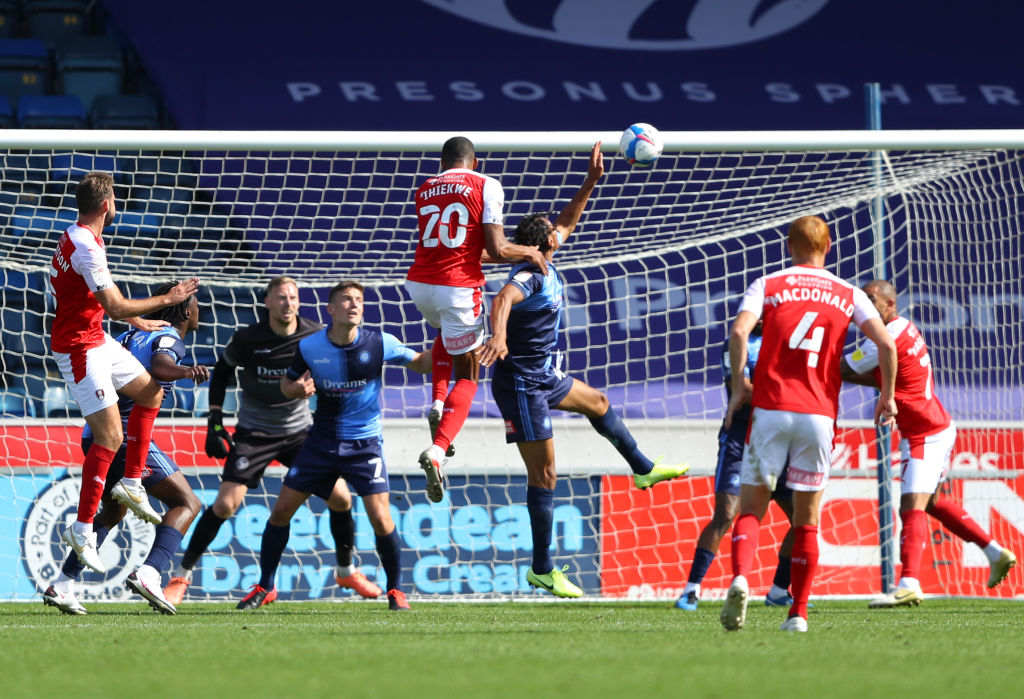 Since he was appointed player-manager eight years ago, Ainsworth has only been able to spend money on a handful of players, focusing instead on free agents and an incredible team spirit, but this summer had been given backing for their Championship adventure with seven new arrivals, four of them paid transfers. They included Hibernian striker Daryl Horgan, who was handed a starting place against Rotherham having come off the bench in the club’s EFL Cup defeat on penalties at Brentford the previous week and scoring.

During the game Ainsworth – a rare character in the game who looks more like a rock and roll star than a football manager and indeed still plays in a band – nervously played with his long rocker hair and jumped to head every imaginary ball on the touchline. Anthony Stewart, superb for Wycombe at centre-back all day, hit the bar at the end of the first half while Scott Kashket, a constant thorn in Rotherham’s side, had a lobbed chance cleared off the line just minutes before the away side’s winner.

It was a hard defeat to take for the Chairboys, but Ainsworth remained philosophical. “I’m really proud of them today,” he said. “It’s the first game in the Championship and I’d have loved to have completed the fairytale with a win, but we’ll have to see who’s going to get that first goal, where the first win is going to come from, we’ll have to see, but overall I’m really pleased.”

The lack of fans did take the shine off what was a landmark day for the club and Wheeler – one of few in the squad who has experience of playing in the Championship, having signed from QPR a year ago – admitted they were missed. “I don’t doubt had we had a full house here we’d have got a better result, because they give us that edge. We wish they were here, last season they were a big part of why we did so well, because every tackle, every header, every positive thing that we did there was a big roar and teams didn’t like coming here, the fans were a big part of that.

“But the gaffer never changes,” he added. “If we were bottom of League Two or top of the Championship, he’s exactly the same way week in week out; he’s very very positive and upbeat and never lets us dwell on things for too long.”

Despite defeat, Parry is also optimistic about Wycombe’s fortunes this season. “I think we have proved against Brentford last week and against Rotherham today that we have nothing to be afraid of in this division,” he said. “We can hold our own, we can compete. I’m not saying we’re going to be top-six, but we can compete and I think that’s the message we should be taking out of today.”

“The lads are a little bit down, but we’ll pick them up and we’ll go again. It’s one hiccup along the road, but we’re going to have plenty of good days as well.”