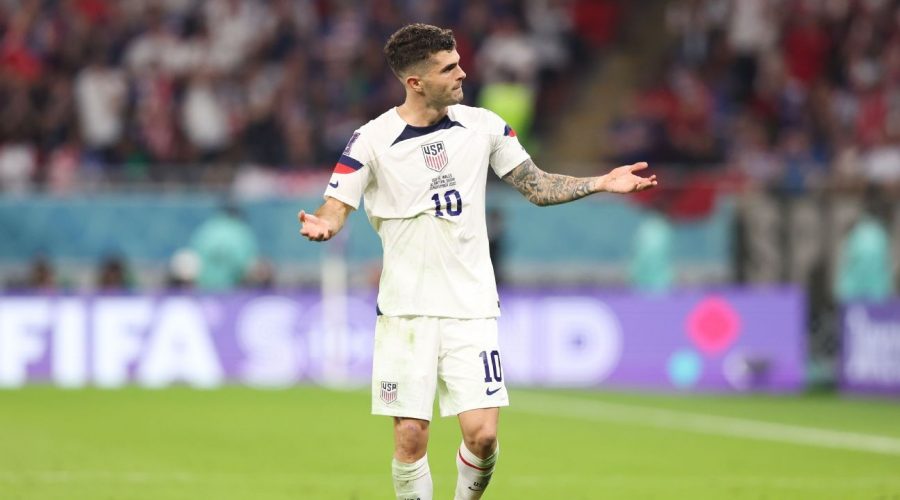 Since the U.S. men’s national team learned their path through the World Cup back on April 1, just about everyone picked the opening game against Wales as a must-win. Wales, which hadn’t qualified for a World Cup since 1964, were considered arguably the most beatable team in the group.

But it was more than that: since the World Cup expanded to 32 teams in 1998, a whopping 84% of teams who have won their first group stage game eventually reached the knockout round.

Now that the USMNT failed to get that win, instead settling for a draw on Monday to Wales to open the 2022 World Cup, what are their odds of advancing now? Is their match against England on Friday a must-win, or do they still have some wiggle room?

Before the tournament, FiveThirtyEight’s Soccer Power Index gave the USMNT a 53% chance to reach the knockout round of the World Cup. Now that they’ve opened the tournament with a draw to Wales, their chances have dropped to 45%.

Note that FiveThirtyEight’s SPI gives Wales worse chances at only 37%. The forecast is a measurement of “overall team strength,” they say, with both the attack and defense represented as the two key components. Based on that, the SPI isn’t as confident in the Welsh team.

In the rest of Group B, England have a whopping 93% chance of advancing after their impressive 6-2 win over Iran on Monday, per the SPI. Iran are left with just a 25% chance to advance.

Other models weren’t as keen on the USMNT’s chances to advance out of the group from the start, though. The Alan Turing Institute in London, for instance, gave the USMNT only a 36.1% chance to reach out the knockout stage before the tournament even started. The model hasn’t been updated since the USMNT drew to Wales on Monday, but we’re sure the result didn’t help those odds.

Betting: What oddsmakers think is next for USA

The USMNT’s chances to win Group B have taken a tumble after their draw to Wales, falling from +10000 to +12500, but oddsmakers still seem to believe the Americans are likely to advance out of the group stage at -115, per FanDuel.

Before the Wales match, the USMNT was -118 to advance, meaning that bookmaker confidence was strong going into the start of the tournament and still remains high after Monday’s draw to Wales.

Of immediate concern for Gregg Berhalter & Co. is that England appears to be a strong favorite at -175 for their match on Friday. Even a draw (+290) is more likely than a United States win (+490), per Caesars Sportsbook.

It seems that betting on the USMNT to reach the knockout round still isn’t too risky, but beyond that, take caution. The USMNT opened at Caesars at 100-1 (or +10000) to win the World Cup, but have now fallen to +12500, meaning their long odds have gotten even longer.

Clinching scenarios: how many points the USA needs

Now it’s time to put on your thinking caps because we’re going to do a tiny bit of math.

The USMNT currently sits on one point after their draw to Wales, and between their upcoming games against England and Iran, they can grab up to six more points in the group stage, each win worth three points. That means the USMNT’s best-case scenario now is a seven-point finish for the group stage.

Here’s where anything less than the full points available would put the USMNT:

6 points: With draws worth one point and wins worth three points, the USMNT can’t actually earn exactly six points anymore, but this is good historical context to know: no team in World Cup history has been eliminated from the group stage if they’ve earned at least six points.

5 points: Also a near-guarantee to advance to the knockouts. In the current format of a four-team group stage, no team has earned five points and failed to advance, according to ESPN Stats & Info. In all, 77 teams with five points safely reached the knockout stage.

4 points: Here’s where advancing becomes a bit of a toss-up. According to ESPN Stats & Info, 17 of 33 World Cup teams with four points got out of the group stage in the current tournament format. With just one draw and a win, the USMNT’s path to the knockout round would depend a lot on other results in this scenario.

For instance, in the last World Cup in 2018, two teams with four points did advance (Argentina, Japan) out of the group, but two teams (Iran, Senegal) did not. Notably, two of the teams sitting on four points, Japan and Senegal, were in the same group. Thus, a tiebreaker for “fair play points” — the team with fewer yellow cards and red cards through the group stage — determined who advanced after they were still even on goal differential and goals scored.

3 points: If the USMNT draws all three of their games in this World Cup, advancing to the knockouts would be extremely unlikely. Out of 31 teams finishing the group stage with three points under the current format, only one has ever advanced, per ESPN Stats & Information. That lone occurrence was in 1998, when Chile managed to finish behind Italy, who got seven points in Group B, eking past Austria and Cameroon, who each finished with just two points.

2 points or less: The USMNT’s World Cup would be over.

World Cup history: USA’s chances based on past trends

As we dig into World Cup history, let’s start here: since 1998, 59% of teams who drew their opening game still advanced to the knockout round, according to ESPN Stats & Information. That’s 27 of 46 teams advancing after an opening draw.

The USMNT surely would’ve preferred to have won and been part of 84% of teams who win their first group game and advance — but at least they didn’t lose against Wales. Only 11% of teams to lose their first game in a World Cup reach the knockouts.

Trends matter, but history isn’t guaranteed to repeat itself at the World Cup. Who can forget in 2010 when Spain lost their World Cup opener in a shock upset by Switzerland? Spain immediately course-corrected and went on to win the tournament, albeit by narrow margins along the way.

Then there’s the 1966 World Cup and England, the team the U.S. faces in their second group game. England opened with a scoreless draw to Uruguay, at home on England soil, but they bounced back and eventually won the tournament. The World Cup was much smaller then with 16 teams compared to 32 now, but England still overcame less-than-ideal odds.

It’s also worth highlighting the 1982 World Cup and winners Italy. The format was also different than what we see today with only 24 teams competing, but Italy didn’t win a single game in the four-team group stage and still won that World Cup. Three draws for Italy, and they kept going.

On the other hand, maybe it would be better for the Americans if history repeats itself: The U.S. advanced to the round-of-16 knockout stage at the 2010 World Cup after drawing the opening game to England. Clearly, all hope is not lost yet — at least historically.

November 24, 2022 Soccer Comments Off on World Cup odds and scientific predictions: Can USA get out of their group?
NFL News