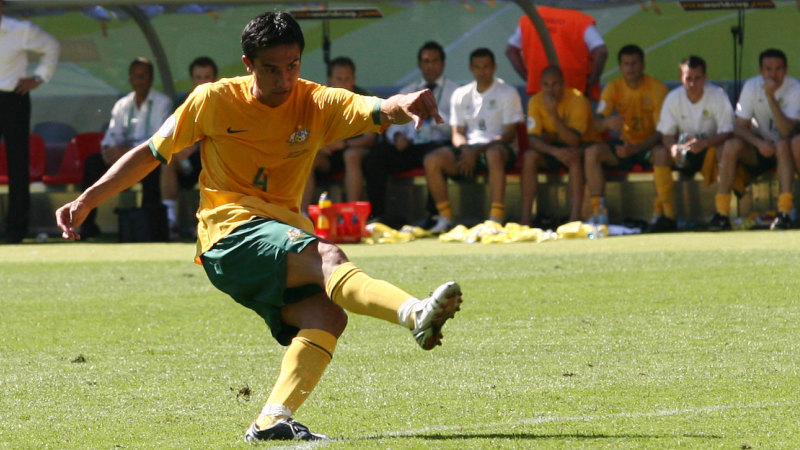 Doha: An awful truth obtains about Australia at the 2022 World Cup – it could all be over by Tuesday night, local time.

That is not to wish ill on the Socceroos, who are like a likeable lot, with no trace of the aloofness of some of their forbears. They’re humble in profile and personality. Nor is it to underestimate their corporate will. And it’s not treason to say it: It’s history and its nasty habit of repeating. 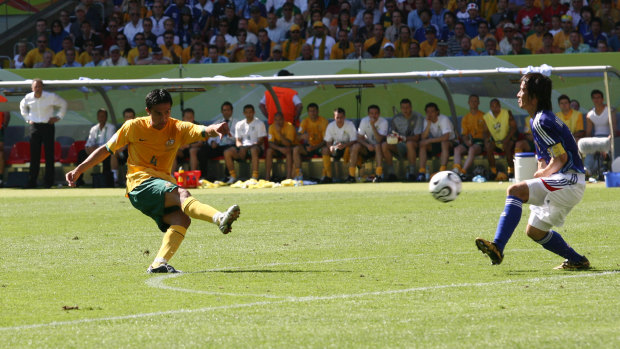 Tim Cahill scores his second goal to put Australia into a 3-1 lead over Japan at the 2006 Cup in Germany.Credit:Vince Caligiuri

Australia have played in five World Cups and lost their first match in four of them. The exception is 2006, when the country’s greatest team beat Japan on match day one and subsequently became the only team to advance beyond the group stage in a World Cup.

In Hamburg in 1974, midfielder Col Curran scored Australia’s first World Cup goal. Sadly, it was into his own net, and East Germany won 2-0. There was no other goal for Australia in that tournament.

Thirty-two years elapsed before Australia scored a World Cup goal of their own. Even then, they left it late, trailing Japan in Kaiserslautern until the 84th minute, then scoring three times in eight minutes. It was considered a Guus Hiddink masterstroke.

In 2010 in Durban, the ageing Socceroos didn’t know what hit them. Germany were already 2-0 up when Tim Cahill was sent off, and they added two more, setting Australia a handicap they could not make good. Yet before Germany scored, makeshift striker Richard Garcia had a close-range chance. Doubtlessly he thinks about it still. 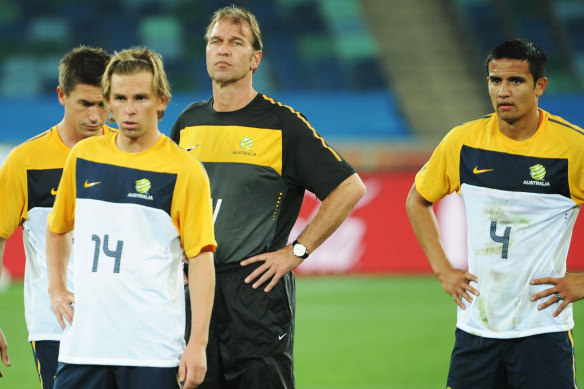 The Socceroos at their first training session in Durban ahead of their opening game against Germany at the 2010 World Cup in South Africa.Credit:Vince Caligiuri

In Cuiaba in Brazil in 2014, the Socceroos conceded twice to Chile in the first 15 minutes, and although under Ange Postecoglou they continued to play attractive football that night and throughout that tournament, they were already too far behind.

In Kazan in 2018, it was different. A lesser Australian team bravely held France at bay until a freak own goal for Aziz Behich in the 81st minute did for them. Australia laboured unavailingly for the rest of the tournament.

Behich, a defender, wanted it to be known this week that he has scored a couple of times this season for Dundee United – at the right end.

Now France awaits again to trample over the Socceroos first-up grave. It’s not that it’s impossible to redeem a first-match defeat. It’s that Australia haven’t and few teams do.

It’s not over-confidence, but it is infectious. Camp followers have caught it and are scheming about later rounds. A non-result would be result enough. A draw would be mind-altering. It’s soccer’s third way. You can be sure the Socceroos are thinking about that.

In World Cups, the premium on the first match is inestimable. Partly, it’s because it is dwelled upon like no other. It takes forever to arrive – years in fact – and in the meantime is played over and over in the heads of players, coaches and fans. The Socceroos have been polite and dutiful in their media obligations this week, but it’s clear they just want to get out there and kick the talk.

Partly, it’s the tournament format. It’s not quite knock-out, but the margin for error is slight. Qatar gave up two early goals in their opener against Ecuador on Sunday night and knew then that all their long-cherished dreams were as desert dust. So did the crowd; they decamped.

There was a parallel in the recent T20 cricket World Cup. Australia suffered a heavy defeat against New Zealand on day one, and although they did not lose again, the numbers were stacked too high against them. The harder they tried, the worse it got. That’s the lot of the first-round loser.

Above all, in soccer, it’s the scoring system. Goals are not merely scores, they’re landmarks. In other sports, it’s less acute. In Australia’s other football codes, each score is a nudge to the scoreline. In basketball each basket is a mere tickle.

In soccer, each is an earthquake. It transforms not just the scoreline, but the mindsets and the mood. It makes each one – scored or yielded, crafted or chanced, with the run of play or against, into your opponents’ net or your own – precious. One goal can change lives. If Garcia had scored, if the ball had not deflected so wickedly off Behich, if Cahill had not made that breakthrough against Japan …

France and history stand like sentries in Australia’s path. The one sure way to stop history repeating is to make your own.