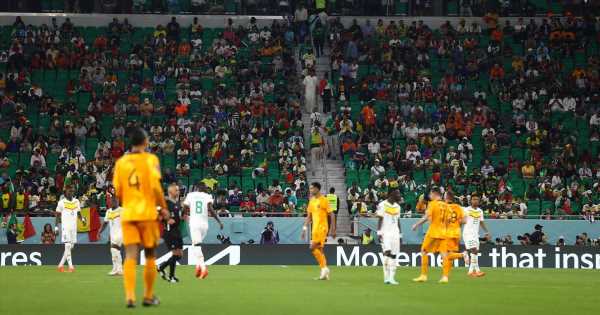 The football world has been left scratching their heads after the official capacity for the Netherlands vs Senegal match was almost 2,000 higher than the stadium capacity.

Louis van Gaal’s Dutch side ran out 2-0 winners over the Africans in their opening match of the World Cup. Goals from Arsenal and Manchester United transfer target Cody Gakpo and former Everton flop Davy Klassen.

However, there was something very fishy about the number of fans who were supposedly in the stadium.

The second match of Group A took place in the Al Thumama Stadium. Various sources claim the ground, which was officially opened on October 21, is capable of holding 40,000 spectators.

However, those who tuned into Holland vs Senegal would have noticed some rather large sections of empty seats across the stadium. And those within the stadium and watching at home were left baffled when the official capacity was announced.

What are your thoughts on the unusual attendance figures? Let us know in the comments section below

Despite the supposed 40,000 total capacity, the official attendance was announced as 41,721 people. If there was any accuracy in this figure, 1721 people would have had to have sneaked into the ground.

They also would have either had to sit on the steps, share some seats with other fans, or cram into VIP and hospitality sections of the ground. However, this is evidently very unlikely as the ground barely looked to be 75% filled. While the matches themselves have not disappointed with 13 goals scored in the first three games, many eyes will surely be scouring the stands for any more empty sections. This dubious announcement proceeds another embarrassing moment for the hosts in their opening match.

As well as becoming the first ever hosts to lose their opening match, thousands of spectators exited the stadium at half time. Whether these dubious statistics and poor attendances will be repeated, remains to be seen.

November 21, 2022 Soccer Comments Off on World Cup clash has 1,700 more in attendance than stadium can officially hold
NFL News