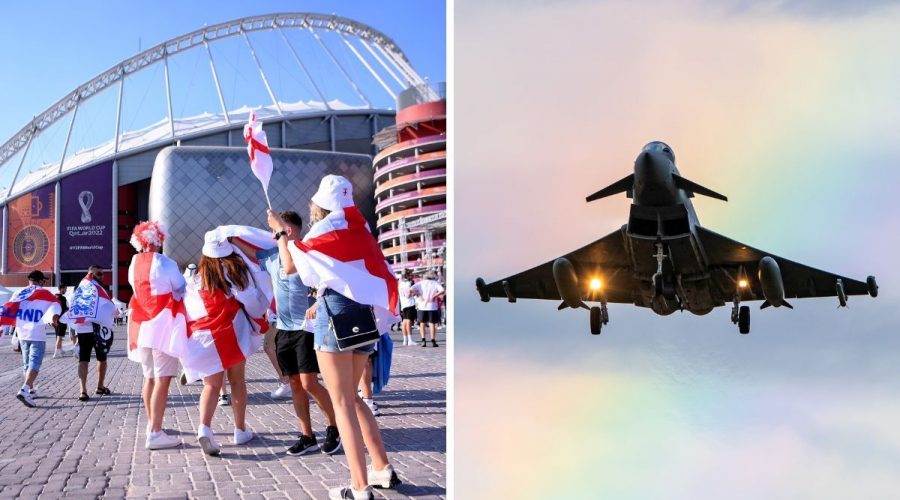 Wales and Bale prepare for World Cup clash against Iran

World Cup organisers in Qatar have enlisted the help of the RAF to protect against the threat of terrorist attacks over the course of the tournament, which is set to run until mid-December. Qatar has drafted in extra security measures from 16 nations across the world, including the UK, as part of a comprehensive plan to keep stadiums safe and minimise danger to supporters from potential terrorist events.

The British government is sharing knowledge with Qatar throughout the duration of the World Cup, according to i, while several RAF Typhoon jets have been earmarked to join their Qatari counterparts on air patrols. American SWAT teams have also been present in the country since the beginning of the tournament and will likely be in place at the Al Bayt Stadium when England face the USA on Friday evening.

Riot police and sniffer dogs from France and Turkey have also been called in by the decision-makers at the World Cup, with many security forces meeting a month before the tournament began in order to conduct drills and plan out their approach to ensuring maximum protection for match-going fans, team members and journalists alike. Other countries and regions supplying personnel to Qatar are said to include Germany, Finland, Jordan, Kuwait, Pakistan, Palestine, Poland and Saudi Arabia.

Security in Qatar is thought to be at its highest possible level at present, with the attention of the planet set to be fixated on the Gulf nation while the World Cup is played out over the coming weeks. There has been a major police and security presence at all group stage matches up to now, with fans being made to pass through airport-style scanners before being subjected to bag searches.

The UK government have already warned travellers that terrorists may try to carry out attacks in Qatar during the World Cup, although the risk of a large-scale event is believed to be low as things stand. Security expert Will Geddes recently played down the threat of fans being targeted by attackers when quizzed on the topic by the Metro, saying: “Qatar is a reasonably secure location given it is a small country and it is pretty easy to control that environment.

“The Qataris not only have their domestic security but they have brought in US and UK security advisors and personnel to assist. One thing you can say about Qatar is that they can throw money at security, making it very difficult for anyone to carry out an attack with any degree of sophistication.

“They will obviously be very conscious of the fact that they are now in the world’s glare when they have been striving for a long time to be the equivalent of Dubai. If they get this wrong, it will not aid their journey in trying to increase their profile.

“The authorities will be monitoring crowds, including covertly monitoring behaviour and indicators, they will have a lot of technology that they will already have and will have brought in specifically for the World Cup process. This will be right across the board, from monitoring CCTV cameras to communication networks. It’s a safe assumption that this will be the most heavily surveilled World Cup ever.”