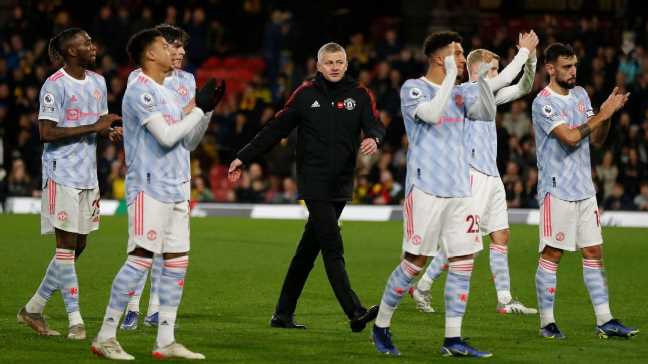 In an alternate universe, Mauricio Pochettino’s Manchester United have just cruised past Watford to keep pace with the Premier League leaders and Ole Gunnar Solskjaer is preparing his Molde team for a trip to Brann.

Instead, the reality is that Solskjaer, who was meant to hand over the reins to the Argentine more than two years ago, is only just saying his goodbyes. When Jose Mourinho was sacked in December 2018, the plan was for Solskjaer to steady the ship as caretaker manager until the end of the season and let United prepare their approach to Tottenham for Pochettino.

United’s executive vice-chairman Ed Woodward still insists there was no defining moment that prompted the club to veer away from what had been decided, although beating Pochettino’s Spurs 1-0 at Wembley in January 2019 did Solskjaer no harm at all.

The Norwegian won his first eight games in charge but Woodward was also impressed by the way he handled back-to-back defeats to Arsenal and Wolves in March. Woodward particularly liked that Solskjaer had the courage to call the 2-1 defeat at Molineux the “worst performance of his tenure.”

Woodward remains adamant that United’s initial form under Solskjaer — 14 wins from his first 17 games — did not “force his hand” to appoint him permanently in March 2019 but sources have told ESPN that people around the executive vice-chairman believe he was seduced by their friendly working relationship; a stark contrast to the stress of dealing with Mourinho’s constant demands.

Solskjaer was initially brought in to put “smiles back on people’s faces” and the grin was there until the bitter end. When the camera wouldn’t work for his video news conference following the 4-1 defeat to Watford on Saturday, he could be heard joking behind the black screen: “I don’t think they’ll want to see me anyway.”

Popular but he had no edge

He was popular with the staff and when United were knocked out of the Europa League by Sevilla in August 2020, the travel department were nervous to tell Solskjaer they were struggling to organise a plane to fly to the team back from Cologne on such short notice. He told them not to worry and that the players would just have to stay in Germany for another night. When the hotel in Bern for the Champions League match with Young Boys in September was not up to the club’s usual standards, Solskjaer just laughed it off. “Jose would have gone ballistic if he had still been in charge,” one source told ESPN.

Visitors to Solskjaer’s office at Carrington were often surprised that he was the one making the tea or coffee, while he also insisted on sitting with his players at meal times rather than on the designated coaches table.

There were always concerns Solskjaer would not be able to compete with elite coaches like Pep Guardiola and Jurgen Klopp (the talk around Molde in December 2018 was whether or not he had done enough to earn a new contract) but Woodward told close colleagues he “played the part” of United manager very well.

It started on his first day as caretaker boss when Solskjaer insisted on ending a whirlwind 24 hours by visiting the staff Christmas party. He gave a short speech and got on the dance floor, even making sure he was dressed appropriately by wearing the club suit left behind by Daley Blind, who had been allowed to join Ajax in the summer.

In the end, though, there was a feeling among some players that he was too desperate to be liked and that the angry streak that flared occasionally was not enough. Squad players would regularly leave meetings believing they were set for a run of games in the team only to find themselves back on the bench at the weekend.

Too much delegation and too many broken promises

After returning from a successful loan spell at Roma, defender Chris Smalling was told he was part of Solskjaer’s plans for the coming season only to then be informed on deadline day he had actually been on the market all along. Smalling eventually secured a permanent move to Roma but it almost collapsed because his representatives had been given so little time to sort it out. “There were too many broken promises,” added one source.

One player, meanwhile, was surprised to get a call from United’s chief negotiator Matt Judge to discuss whether or not to have an operation to correct an ongoing injury. Asked why Solskjaer was not the one making the call, Judge said it had been delegated because it might be a “difficult conversation.”

Delegation became a key part of Solskjaer’s blueprint with the 48-year-old insisting he was “a manager, not a coach.”

A number of players became frustrated at the influence wielded by assistant first team coach Kieran McKenna despite his limited experience in senior football. He played a significant role in training, team selection and often gave team talks instead of Solskjaer on the evening before games. One former United defender was convinced he wasn’t being picked simply because “McKenna doesn’t like me.”

Solskjaer backed his staff right up until the end, telling owner Joel Glazer after the 5-0 defeat to Liverpool they were “world-class,” while sources told ESPN that he rejected the offer to hire another proven coach. There were favourite players, too, and his reluctance to rotate became an issue in the dressing room. There were complaints from some players at the end of the 2019-20 season that the campaign had ended in lacklustre semifinal defeats to Chelsea (FA Cup) and Sevilla (Europa League) because they had been overused.

Some of the squad, meanwhile, believed Paul Pogba was afforded preferential treatment. Solskjaer tried to get Pogba to understand his defensive duties in central midfield but when that didn’t work, moved the France international out to the left rather than stressing the need to improve if he wanted to keep his place. The regular griping from Pogba’s agent, Mino Raiola, about his contract situation (it expires in 2022) also went unpunished.

The club tried to help Solskjaer rid himself of an image that, at times, they felt bordered on “bumbling.” Noticing that he occasionally landed himself in hot water by tripping over his words during early morning news conferences, United moved them to the later time of 1 p.m. on a Friday to give him time to acclimatise back into English after speaking Norwegian with his family at home each evening.

Solskjaer didn’t like the image either and was annoyed when veteran goalkeeper Lee Grant gave a radio interview in which he suggested it was only Cristiano Ronaldo’s return which stopped the team eating as much dessert as they wanted on the night before games.

The jokes, though, eventually seeped into the dressing room and the squad laughed that Solskjaer was the man to go to for Netflix recommendations because of his habit of watching replays on an iPad in the dugout during matches rather than venturing out onto the touchline. He still had some senior players onside after the heavy defeat to Liverpool and received messages of support on the Monday afterwards, but that evaporated after being toyed with by Manchester City in 2-0 loss at Old Trafford two weeks later.

The right time to go?

Sources have told ESPN that Solskjaer, who only signed a new three-year contract in July, began to fear for his job after the 4-2 defeat to Leicester City on Oct. 16. He locked the players in the dressing room at the King Power Stadium for 45 minutes after the final whistle, demanding a response against Atalanta in the Champions League group stages four days later. Despite the reprimand, United were 2-0 down inside 30 minutes before rescuing the game with three goals in the second half to seal a 3-2 win.

Sources have told ESPN that even after humiliation at the hands of Liverpool and Manchester City, the club believed Solskjaer deserved time to turn things around only for defeat at Watford on Saturday to “make it clear” that the situation could not be salvaged.

Solskjaer, meanwhile, believes it has been his attempts to make United a more attacking team that have proved his undoing. After a number of impressive results — particularly against Guardiola’s Manchester City — secured by playing on the break, he told players over the summer he would be implementing a style aimed to dominate more games. Ultimately it didn’t work, and in the last seven games United have conceded 19 goals. Solskjaer also believes that had centre-back Raphael Varane — in his eyes the most important summer signing ahead of Ronaldo and Jadon Sancho — been fit, United would have been challenging at the top of the table.

If nothing else, Solskjaer leaves United in a better position than when he took over and it’s possible to believe both that he did a good job and that it was time to go.

He didn’t win a trophy but secured back-to-back top three finishes for the first time since Sir Alex Ferguson retired in 2013 and oversaw an English record run of 29 away games unbeaten between January 2020 and October 2021. In 168 games under Solskjaer, United scored five or more goals on 10 occasions compared to twice in 302 games under David Moyes, Louis van Gaal and Jose Mourinho.

In the end, Solskjaer achieved what he was brought in to do nearly three years ago. But with the foundation built, the next step proved one too far.